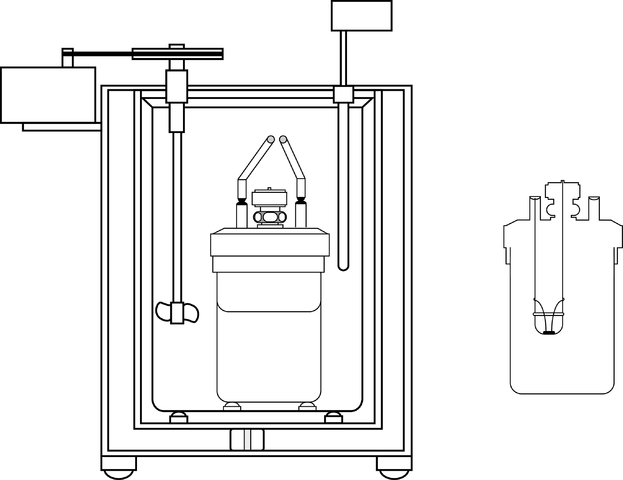 In the laboratory the simplest calorimeter that can be found is that of the coffee glass. It is used to measure the heat absorbed or released in a reaction at constant pressure, in aqueous solution. The reactions are selected to avoid the intervention of reagents or gaseous products.

In an exothermic reaction, the amount of heat that is evolved can be calculated from the increase in the temperature of the calorimeter and the aqueous solution:

On the other hand, the heat gained by the aqueous solution is equal to m · ce · ?t. In the formula m = mass of water, ce = specific heat of water and ?t = temperature variation. Knowing all this, one can then calculate the amount of heat released by the exothermic reaction.

In 1780, AL Lavoisier , a French chemist, considered one of the fathers of chemistry, used a guinea pig to measure the production of heat by its respiration.

How? Using a device similar to a calorimeter. The heat produced by the guinea pig was evidenced by the melting snow surrounding the apparatus.

The calorimeter consisted of a cylindrical, varnished tin cup supported by a tripod and internally terminated with a funnel. In its interior, another glass was placed, similar to the previous one, with a tube that crossed the outer chamber and that was provided with a key. Inside the second glass was a rack.

The being or object whose specific heat was to be determined was placed on this grid. Ice was placed inside the concentric glasses, as in the basket.

The heat produced by the body was absorbed by the ice, causing it to melt. And the liquid water product of the melting of the ice was collected, opening the internal glass key.

And finally, with the water heavy, the mass of the molten ice was known.

The most used calorimeter in chemistry teaching laboratories is the so-called coffee cup calorimeter. This calorimeter consists of a beaker, or instead, a container of anime material that has certain insulating properties. Inside this container the aqueous solution is placed with the body that is going to produce or absorb heat.

A lid made of insulating material with two holes is placed on the upper part of the container. In one a thermometer is inserted to measure changes in temperature, and in the other a stirrer, preferably made of glass material, which fulfills the function of moving the content of the aqueous solution.

The image shows the parts of a bomb calorimeter; However, it can be seen that it has the thermometer and the stirrer, common elements in several calorimeters.

Furthermore, it can be used in determining the specific heat of a body; that is, the amount of heat that a gram of the substance needs to absorb to raise its temperature by one degree Celsius. .

It is a device in which the amount of heat that is given off or absorbed in a reaction that occurs at constant volume is measured.

The reaction takes place in a sturdy steel vessel (the pump), which is immersed in a large volume of water. This keeps the water temperature changes small. Therefore, it is assumed that the changes associated with the reaction are measured at constant volume and temperature.

This indicates that no work is done when a reaction is carried out in a bomb calorimeter.

The reaction is started by supplying electricity through cables connected to the pump.

It is characterized by having an insulating structure called a shield. The shield is located around the cell where heat and temperature changes occur. Likewise, it is connected to an electronic system that maintains its temperature very close to that of the cell, thus avoiding heat transfer.

In an adiabatic calorimeter the temperature difference between the calorimeter and its surroundings is minimized; as well as the heat transfer coefficient and the time for heat exchange are minimized.

Its parts consist of the following:

-The cell (or container), integrated into an insulation system by means of which it tries to avoid heat loss.

-The thermometer, to measure changes in temperature.

-A heater, connected to a controllable source of electrical voltage.

-And the shield, already mentioned.

In this type of calorimeter, properties such as entropy, Debye temperature, and state electron density can be determined.

It is a device in which the reaction cell and the pump are immersed in a structure called a jacket. In this case, the so-called jacket consists of water, kept at a constant temperature.

A microprocessor controls the temperature of the cell and the jacket, making the necessary corrections for the leakage heat that results from the differences between the two temperatures.

These corrections are applied continuously, and with a final correction, based on measurements before and after the test.

Developed by Caliendar, it has a device to move a gas in a container at a constant speed. By adding heat, the increase in temperature in the fluid is measured.

The flow calorimeter is characterized by:

- An exact measurement of the speed of constant flow.

- Accurate measurement of the amount of heat introduced to the fluid through a heater.

- A design to measure the capacity of a gas under pressure.

The calorimeter for differential scanning calorimetry
It is characterized by having two containers: the sample to be studied is placed in one, while the other is kept empty or a reference material is used.

The two vessels are heated at a constant rate of energy, by means of two independent heaters. When the two vessels begin to heat up, the computer will plot the difference in heat flow from the heaters against the temperature, thus determining the heat flow.

Furthermore, the variation in temperature as a function of time can be determined; and finally, the caloric capacity.

-The basic calorimeters, coffee cup type, allow to measure the amount of heat that a body gives off or absorbs. In them you can determine if a reaction is exothermic or endothermic. Furthermore, the specific heat of a body can be determined.

-With the adiabatic calorimeter it has been possible to determine the entropy of a chemical process and the electronic density of the state.

-Microcalorimeters are used to study biological systems that include interactions between molecules, as well as the molecular conformational changes that occur; for example, in the unfolding of a molecule. The line includes both differential scanning and isothermal titration.

-The microcalorimeter is used in the development of small molecule drugs, biotherapeutics and vaccines.

In the oxygen bomb calorimeter, the combustion of numerous substances takes place, and its caloric value can be determined. Among the substances studied by using this calorimeter are: coal and coke; edible oils, both heavy and light; gasoline and all motor fuels.

Likewise, the caloric power has been determined by calorimetry in thermodynamic studies of combustible materials; in the study of energy balance in ecology; in explosives and thermal powders and in the teaching of basic thermodynamic methods.