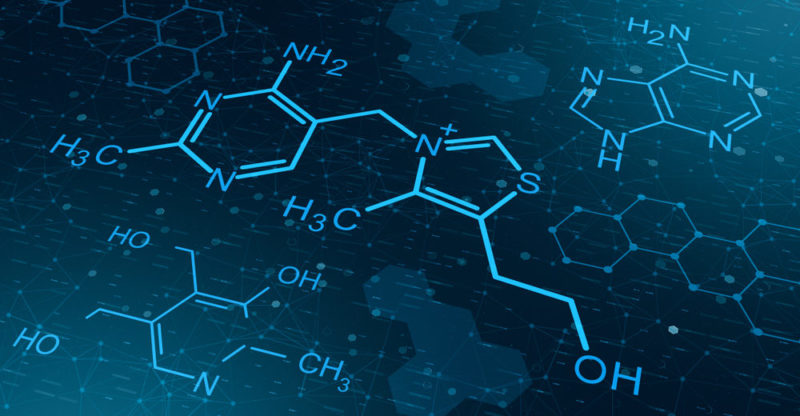 Characteristics of a chemical bond

Examples of compounds with covalent bonds

Examples of compounds with ionic bonds

Origin of the concept

We explain what a chemical bond is and the types that exist. Also, what are its main characteristics and some examples.


What is a chemical bond?

Chemical bonding is the combination of atoms , molecules or ions that form more complex and stable compounds, altering their physical and chemical properties. Once joined, two or more atoms constitute a chemical compound.

Atoms tend to come together to achieve more stable conditions than alone , complementing their electrical charges through the sharing of electrons from their outermost atomic orbit, as well as giving up or accepting electrons to form ions (positive or negative) that are then they attract electrostatically to each other.

This is because the protons in the atomic nucleus have a positive charge and the electrons around them have a negative charge, so the atoms tend to be configured in the most neutral way possible.

There are different types of chemical bonding, depending on the type of bonded atoms, which have their own and peculiar mechanisms for bonding: until now , covalent, ionic and metallic bonds are known and accepted but there are other theories and approximations.

There are three main types of chemical bond:

Characteristics of a chemical bond 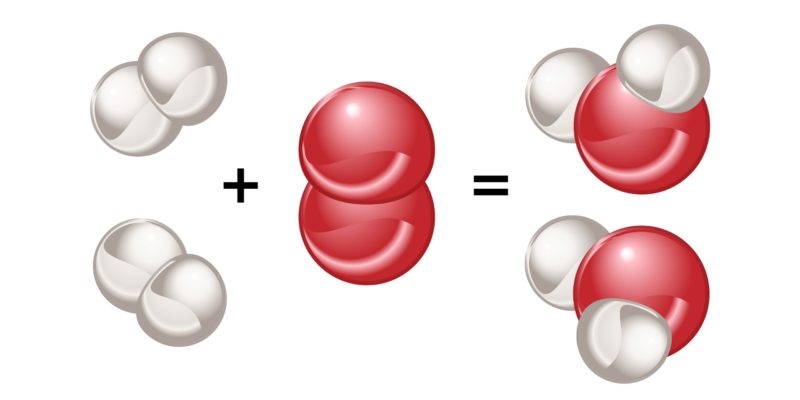 If two atoms of different elements are linked, a polar molecule could form.

Polarity is a characteristic of molecules formed by covalent bonds, and it depends directly on the nature of the bonded atoms .

If two atoms of the same element are bonded , there will be no difference between the electronegativity of each. In this way, the pair of electrons they share will be attracted to each of these atoms with the same force, so the distribution of electrical charges will be uniform in the molecule they form.

The same happens when atoms of different elements are bonded , but whose electronegativity difference is very small (less than 0.4). Molecules formed in this way are called ‘nonpolar or apolar’ and this type of bonding ‘nonpolar covalent bond’.

On the other hand, if two atoms of different elements are bonded , and the electronegativity difference between them is greater than 0.4 , then the most electronegative atom attracts towards itself with greater force the electrons of the bond, generating a non-uniform charge distribution in the structure. of the molecule they form. The molecules formed by this process are called ‘polar’ and this type of bond is ‘polar covalent bond’. 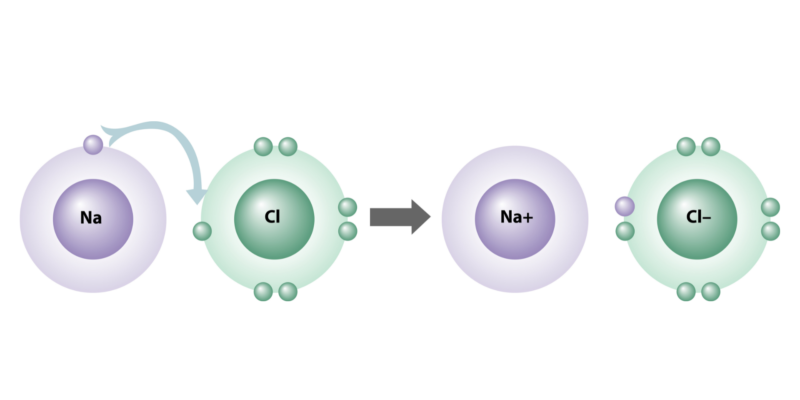 Electrovalence occurs when an atom gains or loses electrons.

Ionic bonds are characterized by the fact that their atoms have a large electronegativity difference (greater than 2) , to the extent that one loses and the other receives electrons when joining.

This electrical capacity in the atoms is known as electrovalence, since some elements are naturally more susceptible to being “donors” of electrons (groups IA, IIA, IIIA of the periodic table) and others tend to be “acceptors”. ”(Groups VA, VIA and VIIA).

The phenomenon that occurs between metallic atoms of the same type that are subjected to metallic bonds to each other is called “sea of electrons” . It can be seen as if atomic nuclei were immersed in a sea of their electrons.

Metals have low electronegativity, are shiny and malleable , conditions that are due to the nature of the bond that holds them together in their solid state: a rigid order that displaces the valence electrons from their orbitals, allowing great conduction of the metal. electricity and heat, and the ability to return almost all of the light that hits them. 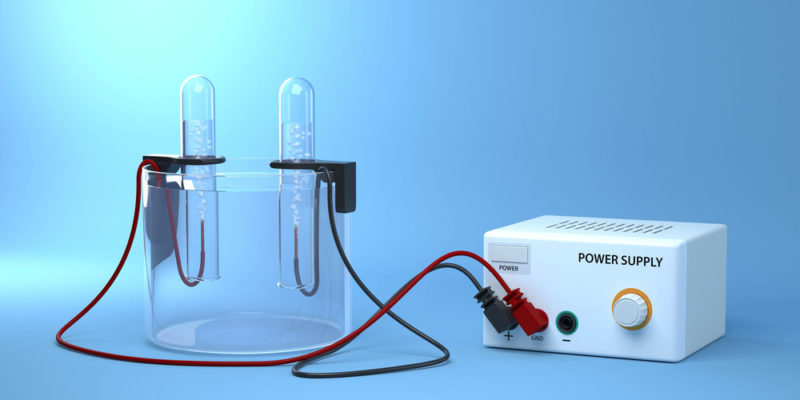 In electrolysis, hydrogen and oxygen are separated from water with electricity.

Chemical bonds can break under certain conditions, when subjected to the action of heat , electricity or other substances that break the bond and allow the release of their involved atoms.

Thus, for example, when applying electricity to water, the hydrogen and oxygen that compose it can be separated in a process called “electrolysis”. On the other hand, by greatly increasing the temperature (supplying heat) of a protein , it can be denatured and break its constitutive bonds.

It is, however, a type of bond with a weak force, but which allows the composition of complex molecules, providing them with great stability, both in organic and inorganic substances.

There are also hydrogen bonding between different molecules of the same chemical compound. For example, water molecules form hydrogen bonds between oxygen and hydrogen atoms. 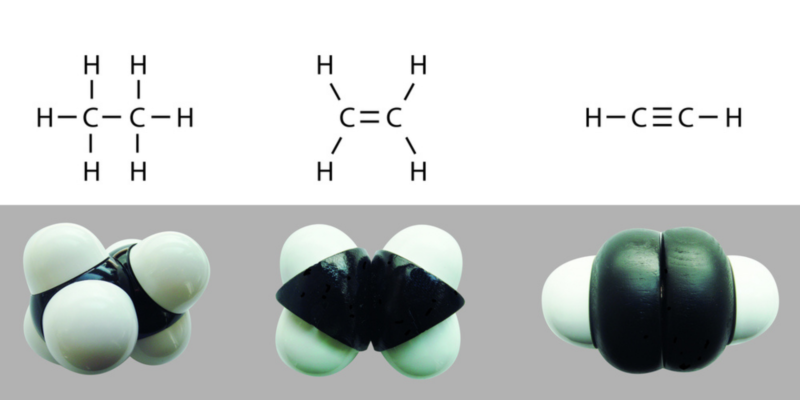 Covalent bonds can be single, double or triple, depending on the number of electronic pairs shared between the atoms that compose them . The more electrons that are shared, the stronger the bond will be and the more energy it will cost to break it.

Examples of compounds with covalent bonds

Covalent bonding is extremely common in the world of organic chemistry . For example, it is present in substances such as:

Examples of compounds with ionic bonds

Many substances have ionic bonds in their compounds, such as:

Origin of the concept

Walther Kossel proposed a theory in which a total transfer of electrons occurred.

Since ancient times it has been suspected that the constituent elements of matter are grouped together according to certain forms of affinity. But it would be in 1704 when Isaac Newton would postulate his theory of chemical bonding , based on the atomic theories already formulated, and noting that “a force” held the atoms together in the observed chemical reactions.

In 1819, thanks to the invention of the voltaic pile, Jöns Jakob Berzelius introduced the notions of electropositivity and electronegativity to the theory of atomic combination, and later, in the 20th century , Gilbert Lewis introduced the concept of the bond formed by pair of electrons , giving rise to the possibility of single, double and triple bonds, since atoms could share between one and six electrons. Thus the covalent bonds arose.

In 1927 a theory similar to that of Lewis also emerged , but in which a total transfer of electrons occurred, and it was proposed by Walther Kossel. This would give rise to ionic bonds.