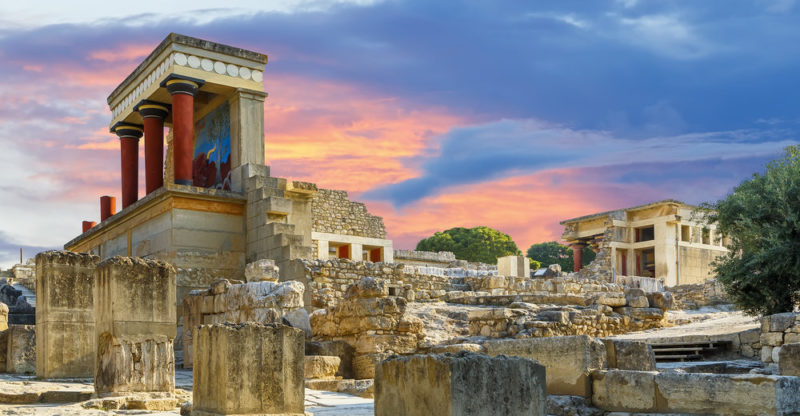 What was the Cretan civilization?

Origin and development of the Cretan civilization

Economy and politics of Crete

The myth of the minotaur

Fall of the Cretan civilization and origin of the Greek world

We explain what the Cretan civilization was, its origin and development. Characteristics of the palaces and the origin of the minotaur myth.

What was the Cretan civilization?

During its heyday, the Cretan civilization was noted for its commercial and shipping might . The island of Crete was considered the most important political and cultural center in the Aegean Sea, as it was located in a strategic geographical point with a connection to Europe , Asia and Africa .

In addition, these towns stood out in art , in branches such as ceramics and painting , and in architecture , with the construction of palaces such as that of Knossos. These pieces and constructions were used by archaeologists and researchers to learn about the history and characteristics of the Minoan civilization, because the existing written records of this culture could not yet be deciphered.

Origin and development of the Cretan civilization 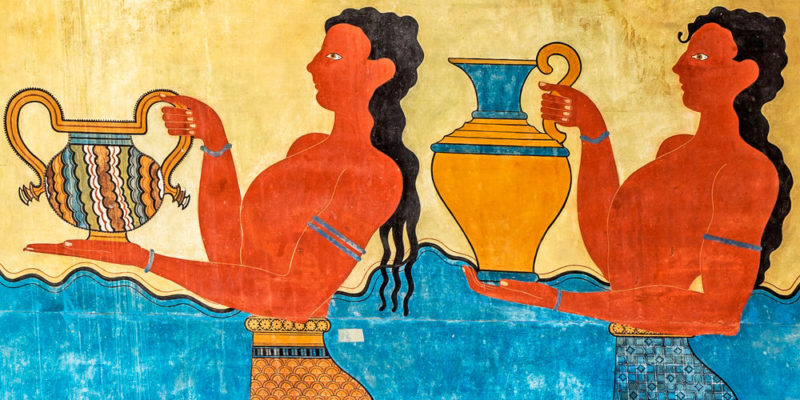 The Cretans were grouped in small villages.

Between 3,000 and 2,000 BC. C. the Cretans were grouped into small communities and formed the first villages . It is believed that part of these populations arrived in the Cretan territory from other places, although there are also records of human life in that area during the Neolithic .

Because the writings of this civilization could not be deciphered, all that is known about life on Crete during this period was obtained from the study of ceramics and found objects. From this evidence, three main stages of Cretan civilization are usually identified:

Artistic and cultural development of Crete 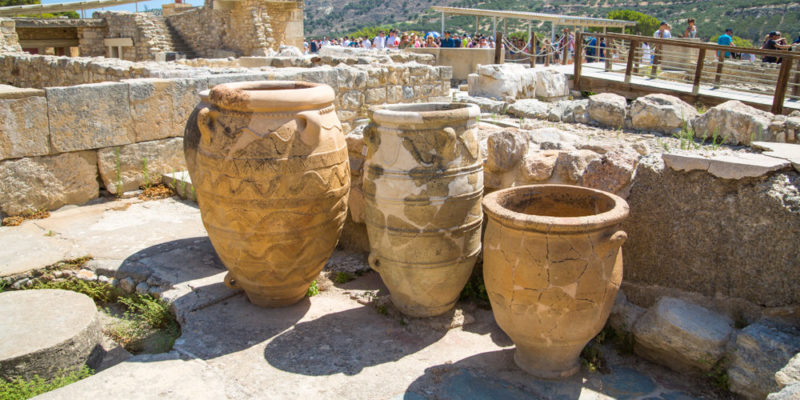 The Cretans stood out in the handling of ceramics. 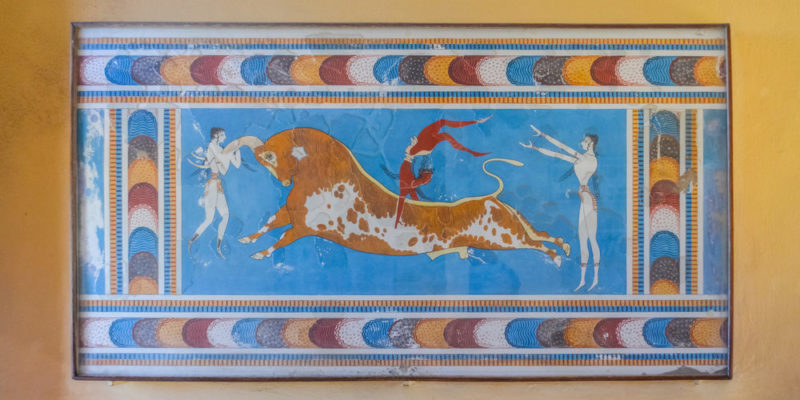 The Cretans played a game in which acrobats threw themselves onto a bull.

Like so many other peoples of antiquity, the Cretan civilization was characterized by being polytheistic . The Cretans worshiped various gods and were naturalists, that is, their gods came from or were related to nature.

They worshiped the mother goddess of nature , who was a symbol of fertility and who was represented by a female figure who was usually accompanied by animals such as snakes and birds .

Everything that is known about the religion of this civilization was obtained through the objects, art and buildings found. It is believed that the Cretans worshiped their gods both privately and publicly and for that they made offerings that consisted of different dances, processions and animal sacrifice rituals .

For this civilization the figure of the bull was of great importance , which was a symbol of life and strength. In many of the cult ceremonies a bullfighting game was performed, which consisted of one of the acrobats throwing himself on a bull that he had previously provoked. 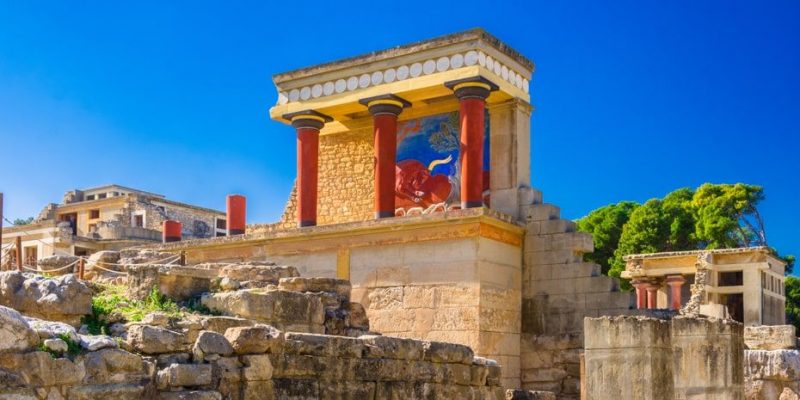 From the palaces, agriculture and food distribution were regulated.

Around 2,000 BC C. the great cities were created in Crete in which imposing palaces and mansions were built. Each palace was an autonomous structure from which the distribution or storage of food and the political and religious life of each territory were regulated. Similar characteristics existed among the various palaces that were situated throughout Crete. Many of them had storage areas, kitchens, workshops, sanctuaries and theaters . They were characterized by not having walls around them, having internal courtyards, workshops (in which many of the pieces that were later marketed) were made, columns and frescoes that decorated the walls.

Around 1700 BC C. some of these palaces were destroyed, it is believed that because of natural phenomena, and then rebuilt.

The most outstanding palaces of this period were:

Economy and politics of Crete 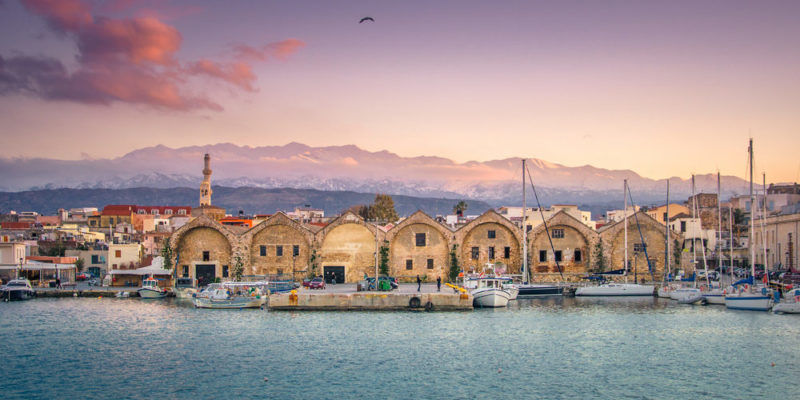 Its proximity to the Nile allowed an important commercial exchange.

The economy of the Minoan civilization was sustained by maritime trade . Its proximity to the Nile delta allowed the Cretans to have a great cultural and commercial exchange with Egypt, Cyprus, Syria, Sicily, Asia Minor and the rest of Greece.

Crete had highly developed handicraft production , for which it exported ceramic products, fabrics, and metal utensils. Agriculture and livestock were also important and many of the products obtained from these industries were exported, such as oil, wine, olives, wool and wheat. For its part, Crete imported metals from other territories, such as gold, copper and silver.

Although due to its size and structure , the palace of Knossos had a notable superiority over the others, it is believed that the Cretan territory was divided into autonomous parcels in administrative, economic and political matters. These centers had a palace around which political, social, religious and economic life was organized. Some scholars maintain the existence of a king and a court made up of nobles.

The myth of the minotaur

The minotaur myth is one of the most emblematic legends of Crete . The story goes that Minos, Sarpedon and Radamanthys were the three sons of King Asterion. After Asterion’s death, Minos told his brothers that the will of the gods was for him to rule the entire palace. To prove it, he assured them that the gods would answer any of their requests and Minos asked Poseidon, god of the sea , to raise a bull from the ocean and promised that he would sacrifice it on their behalf.

Poseidon did so, but Minos, seeing the beauty of the white bull, did not want to sacrifice it and hid it in his herd and gave the god of the sea another bull. Realizing the deception, Poseidon, as punishment, made Pasifae, the wife of Minos, fall in love with the bull and conceive a minotaur with him: a man with the head of a bull who fed on human flesh.

Minos ordered the construction of a labyrinth to enclose the minotaur because it generated disturbances in the town and ordered that fourteen young Athenians should be sacrificed each year (the product of disputes with that town) to feed it.

A young Athenian, Theseus, offered himself as a victim of the bull and together with Ariadne, the daughter of Minos with whom he fell in love, managed to kill the minotaur and get out of the labyrinth alive.

Fall of the Cretan civilization and origin of the Greek world

Around 1750 BC. C. a set of earthquakes shook the territories inhabited by the Cretan civilization and notably affected the centers and main points of development of this civilization. Although the cities were rebuilt, it is believed that they were once again devastated by natural phenomena.

About 1400 BC. C., for reasons that are not clear, the Cretan civilization collapsed . Many scholars maintain that this occurred as a result of the eruption of the Thera volcano (now the island of Santorini) that caused the burning of the main cities of Crete. There are also theories that attribute the collapse of the Cretan civilization to external and civil wars.

During this period of decline, Crete was invaded by the Mycenaean civilization, a civilization of mainland Greece, and succumbed to their might.

The above content published at Collaborative Research Group is for informational and educational purposes only and has been developed by referring reliable sources and recommendations from experts. We do not have any contact with official entities nor do we intend to replace the information that they emit.6