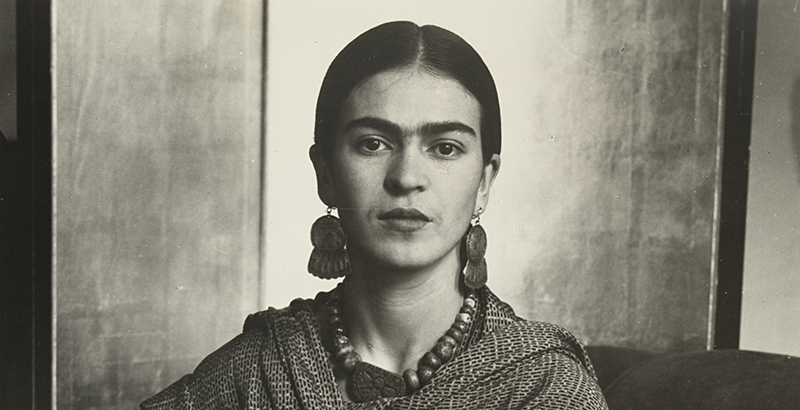 Who was Frida Kahlo?

The style of her work

Her choice of colors

The distinction of her work

The exhibition of her works

Her marriage to Diego Rivera

Her relationship with the communist party

Maternity attempts and her death

We explain who Frida Kahlo was, what her childhood was like and the development of her works. Also, what are its characteristics and death.

Who was Frida Kahlo?

Frida Kahlo or Magdalena Carmen Frida Kahlo y Calderón was a Mexican painter born in Coyoacán on July 6, 1907 and died on July 13, 1954.

In her youth, Frida suffered from polio and later a serious bus accident almost ended her life at the age of 18, a fact that subjected her to 32 surgeries to survive. The difficulties of her own life are reflected throughout all her work.

She was the wife of the well-known Mexican painter Diego Rivera , who introduced her to the circle of the most important artists, and was recognized by various authors such as Marcel Duchamp, André Breton, Vasili Kandinski, and Pablo Picasso.

Her works also express her political and social commitment to the society in which she lived. Her greatest recognition came after her death , in the 70s, and since then she has been considered the most important artist in Latin America .

Her father was German Judeo-Hungarian and her mother was a native Mexican. When Frida was a child, she inherited a love for painting from her father, since it was he who allowed her to retouch and color her own photographs .

This is how Frida learned certain brush strokes that characterized her style as an adult. 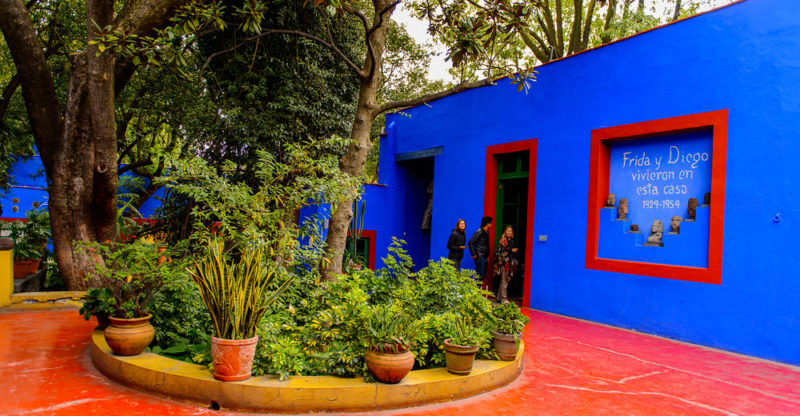 The blue house is currently the Frida Kahlo museum.

In the famous blue house, in the city of Coyoacán (in the streets of Allende and Londres) , Frida was born, grew up and carried out part of her great work as an artist.

This house, which is currently the Frida Kahlo museum , was a place of refuge for various militants of the communist party and political persecutors of the time.

The style of her work 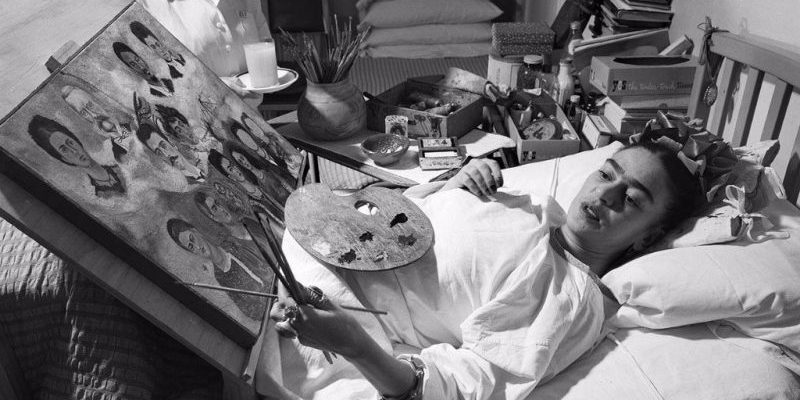 Frida spent several months bedridden and that was when she began to paint.

Her art expresses the sufferings and torments that she went through throughout her life. Due to her illness and accident, Frida spent several months bedridden and it was then that she began to paint, although without the intention of becoming an artist.

In her almost 200 works - mostly self-portraits and still life - she expressed Mexican folklore .

On one occasion, a painter told Frida that her work was surreal , to which she replied that what is about her own real life cannot be surreal.

Her choice of colors

In her works, Frida used vibrant and bright colors and the choice of these colors characterized her style. According to Frida, the meaning of the colors that she gave in her works were the following: 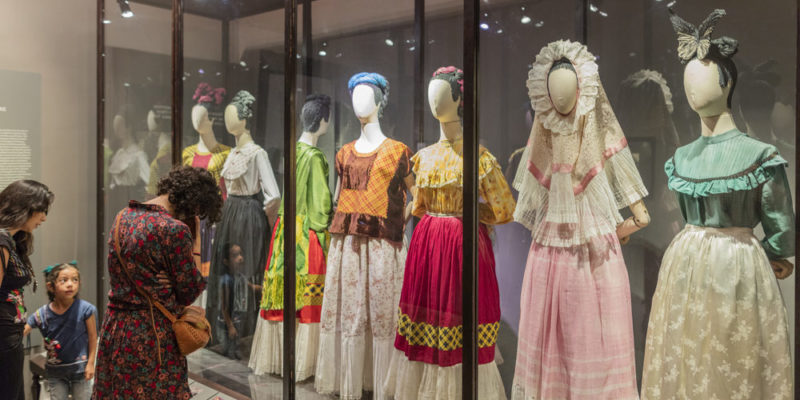 Frida Kahlo’s outfit became a distinctive mark of her personality.

Her husband encouraged her to wear the colorful and characteristic outfits of the native women of Mexico . In addition, she used to proudly wear the colorful fabrics along with extravagant necklaces and combs.

Her outfit became a distinctive mark with which Frida Kahlo is known around the world.

The distinction of her work

Her stormy life and her physical and emotional sufferings characterized her work and differentiated her from her contemporaries.

The exhibition of her works 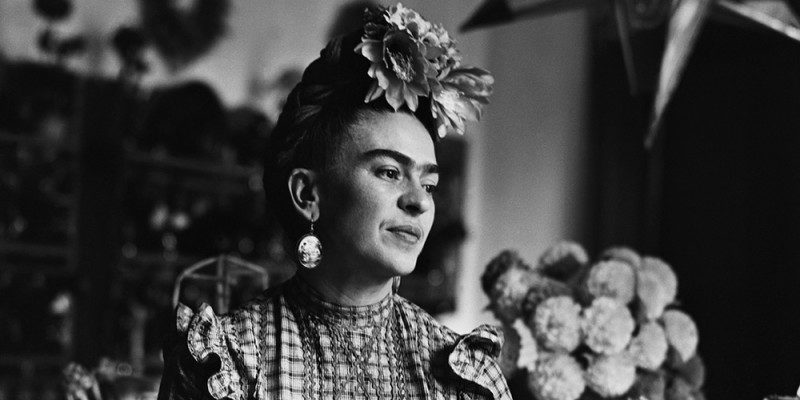 During her exhibition, Frida was in very poor health.

Frida held a single exhibition in her native country . On the day of the inauguration, her health was very compromised, so her doctor (who was also her friend) forbade her to get out of bed, but Frida decided to take an ambulance to the exhibition.

Her bed was placed in one of the rooms and thus, following the order of her doctor, she remained in bed throughout the exposure .

Her marriage to Diego Rivera 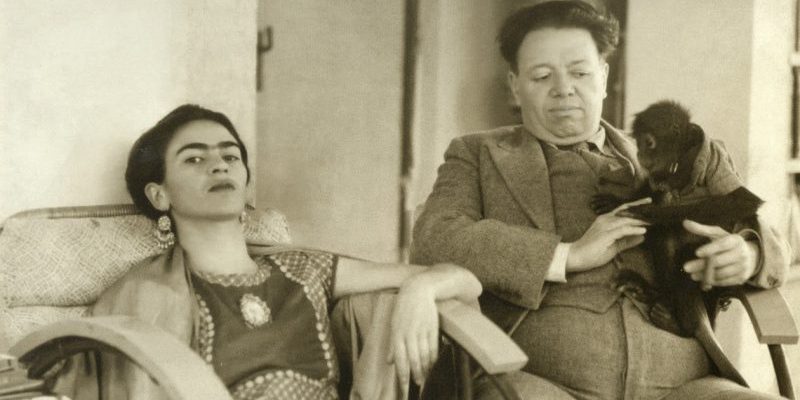 Her marriage to Diego Rivera was characterized by passion, violence, and infidelity.

At the age of 22 she married the muralist Diego Rivera , 20 years her senior. This relationship was characterized by passion, violence, Diego’s infidelities, Frida’s lesbian relationships, and the impossibility of having children. All of this made the bond untenable until the divorce. However, some time later they remarried.

This unstable marriage was going through moments of immense pain , (for example, Frida discovered that Diego was cheating on her with her own sister) but also of immense happiness, since Frida was madly in love with Diego.

With the passage of time, Diego Rivera accepted Frida’s lovers and even gave them political asylum. This was the case of León Trotsky, Frida’s lover under Diego’s consent and a politically persecuted person who was given asylum in the blue house for two years.

Her relationship with the communist party

Frida and Diego participated in the activities of the communist party. She began attending these gatherings two years after the bus accident , and maintained her communist stance (and even participated in one of its demonstrations) until her death at 47.

Maternity attempts and her death 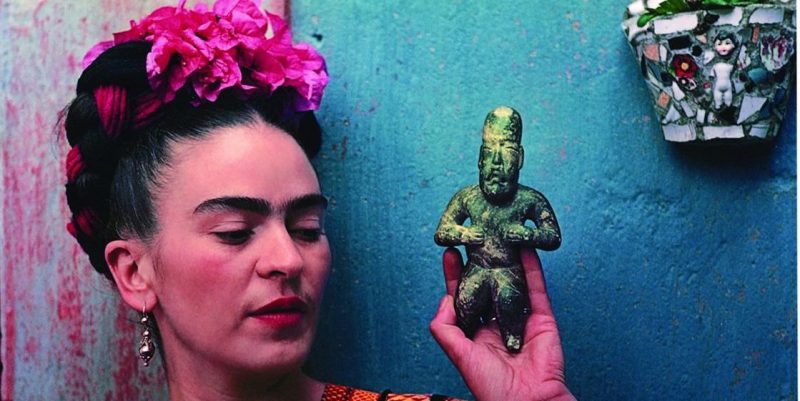 Frida died at the age of 47 as a result of a pulmonary embolism.

On three occasions, Frida became pregnant with her husband but, due to her health problems, she lost all the pregnancies . In her work she expresses her frustrated desire to be a mother and the pain over these lost pregnancies.

She finally died on July 13, 1954 at the age of 47, as a result of a pulmonary embolism. Some theories speak of self poisoning from an overdose of drugs.

Her will was not to be buried (she said she had been in bed for many years), so her body was cremated and her ashes still remain in the blue house.