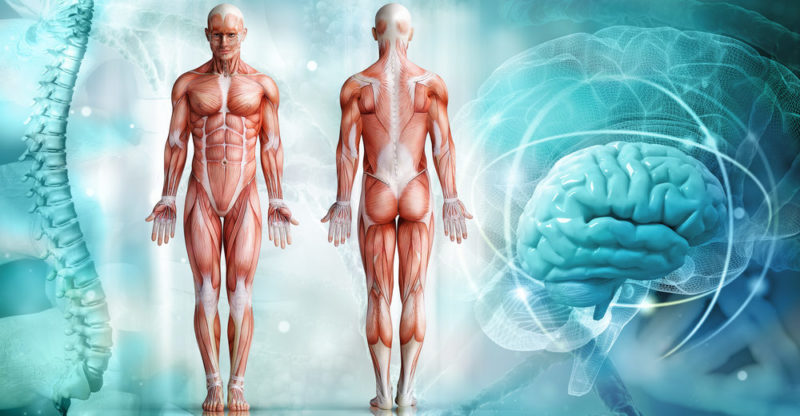 What is the human body?

Atomic composition of the human body

General characteristics of the human body

Cell composition of the human body

Anatomy of the human body

Obtaining energy from the body

Vital stages of the human body

We explain everything about the human body, how it is composed and its characteristics. In addition, the systems it presents and vital stages.

What is the human body?

The human body is the physical, material presence of a human being . It is considered, from the traditional philosophical point of view, as one of the two aspects that constitute it as a whole, together with the mind or the spirit.

From a biological point of view, the human body has the characteristics of a eukaryotic , multicellular organism, from the animal kingdom , belonging to the class of mammals and that of primates, the only member of the genus Homo (the others are extinct).

The constitution of the human body is the result of an evolutionary process almost 2 million years long , starting from some common relative between the chimpanzee ( Pan troglodytes ) and man.

Numerous species of hominids emerged as the proto- human being configured his body to walk upright, oppose his thumbs and develop his brain , resulting in our species Homo sapiens with the body that we already know, approximately 200,000 years ago.

Atomic composition of the human body 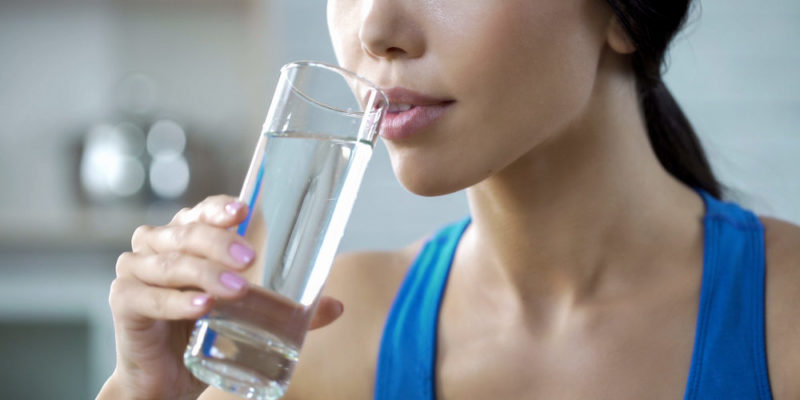 It is estimated that 65% of the adult human body is water.

The human body is composed mostly of water (H2O) that is found inside cells , in the blood and bathing all tissues. It is estimated that 65% of the adult human body is water .

For the most part, these elements make up organic substances in our body such as carbohydrates , lipids and proteins .

General characteristics of the human body 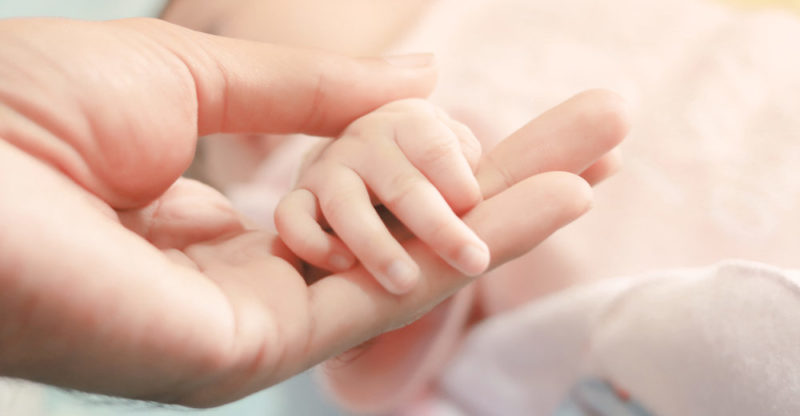 Human skin has a variable thickness of between 0.5 and 4mm.

The surface of the body is covered by about 2 m2 of skin with a variable thickness between 0.5 and 4mm.

Cell composition of the human body 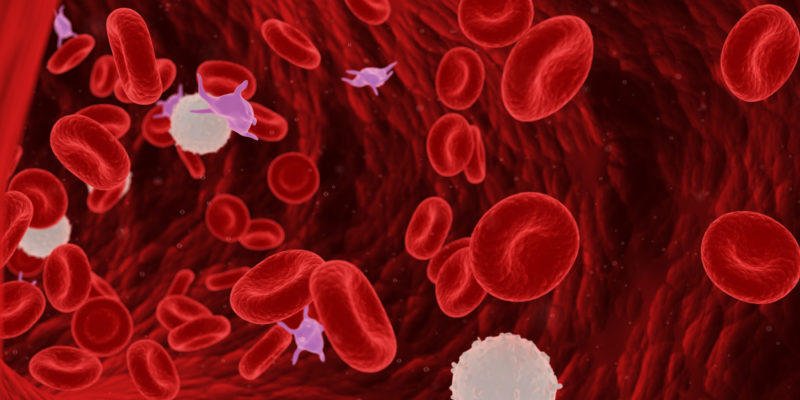 The human body is made up of almost one hundred billion eukaryotic cells (with a defined nucleus), organized in tissues and these in organs. Human cells present a very high degree of specialization, and can be classified into:

Anatomy of the human body 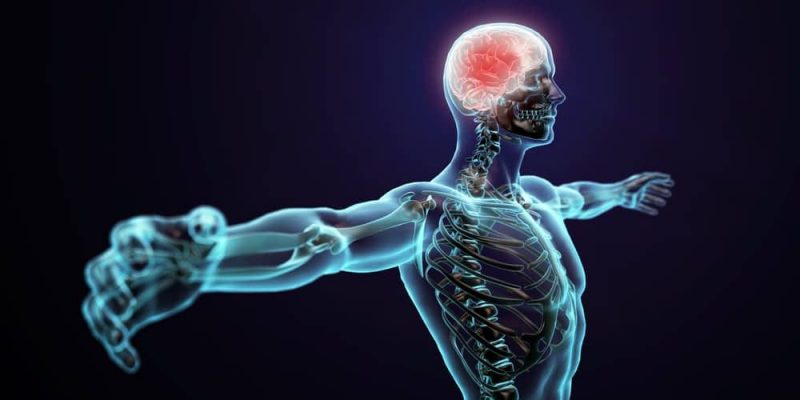 At first glance, the human body is made up of three large segments:

The human body presents bilateral symmetry , that is, it is organized in such a way that a vertical axis can be drawn that divides it in two and both halves will be similar. 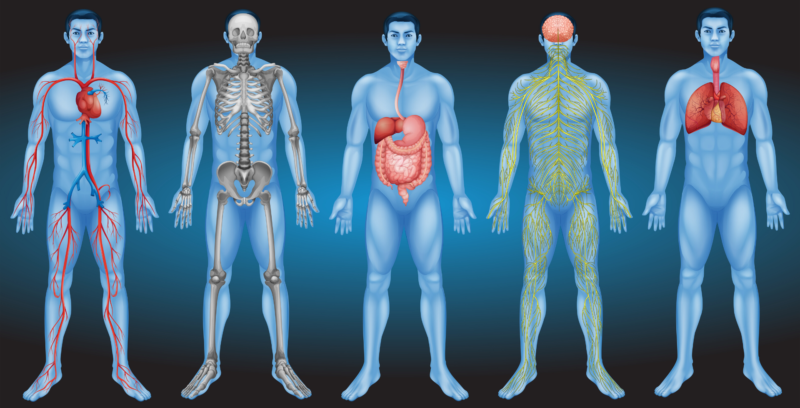 The functioning of the various organs of the human body is classified into circuits called systems. The following are the main ones:

The human body is supported and protected by more than 200 bones , which are calcified and mineralized organic structures to gain resistance to impacts and the body’s own weight.

These bones make up the skeleton, a common and continuous structure that encompasses all sectors of the body except the abdomen , and that operates inside the body (endoskeleton) unlike the shell of other species (exoskeleton).

The skeleton also fulfills important functions in the segregation of blood cells or hematopoiesis . 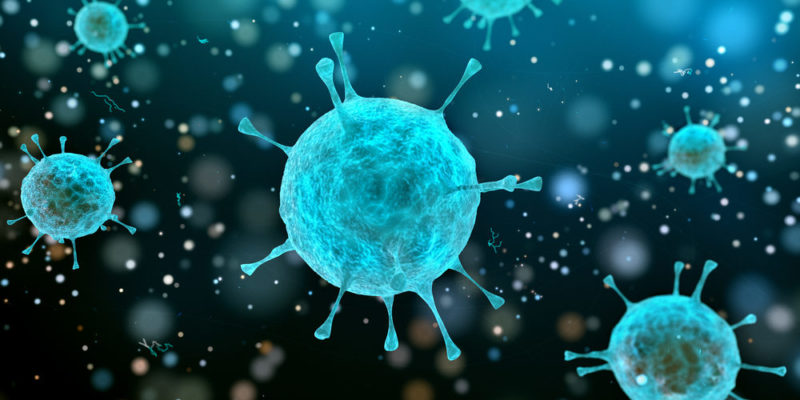 In our body we harbor about 100 trillion bacteria.

Inside the human body, and especially in the intestine , live numerous microbes (especially bacteria ) that are harmless for the organism and often contribute with diverse functions of decomposition of the organic matter.

It is estimated that in each square centimeter of human skin there are about 10,000 bacteria , and in total in our body we harbor about 100 trillion, which represents 1 to 3% of our body mass. 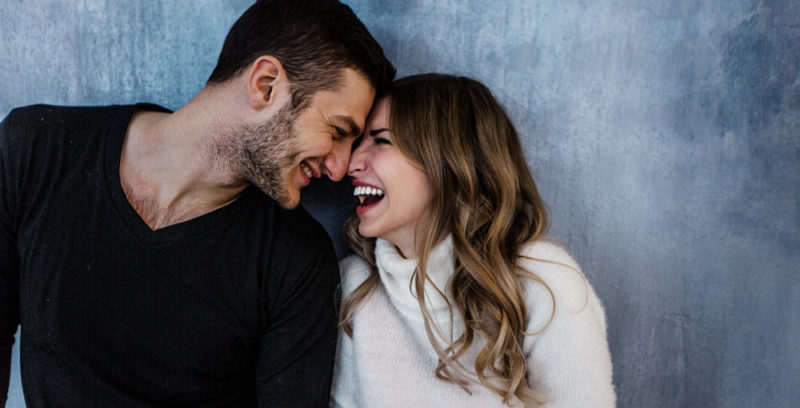 When maturing, the man begins to have facial hair and the woman menstruation.

The human body presents corporal sexual variation from the moment of birth , since individuals are born with defined sexual organs: penis and testicles in men and vulva and ovaries in women.

This differentiation is accentuated after adolescence , when sexual arousal occurs thanks to hormones and the features of sexual maturation that distinguish the adult man from the adult woman take place, such as facial hair, erection and ejaculation, body hair and enlargement. of the voice in men and rise of the breasts, hip enlargement, menstruation in women.

Obtaining energy from the body

Like all animals, the human body operates based on obtaining energy through the oxidation of glucose , for which it requires both respiration to acquire oxygen and the consumption of organic matter to extract sugars .

This energy is what sustains the body while walking, and in the absence of food, the human body will proceed to extract organic matter from itself (from fatty tissues first, then from muscular tissues ). When it can no longer do it, it will cease to function.

Vital stages of the human body 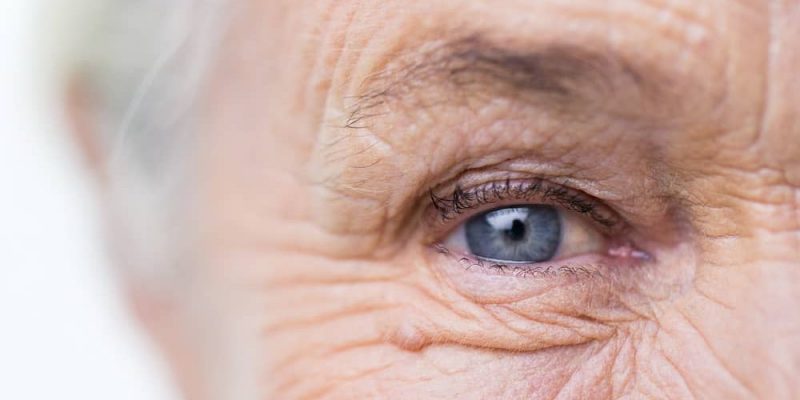 Old age is the full stage of development and sexual maturity.

The human body in its life course will normally go through the following stages from birth to death: