What was the Iturbide Empire?

War of Mexican independence and origin of the Iturbide Empire

Who was Agustín de Iturbide?

Geographic extension of the Iturbide Empire

Politics of the Iturbide Empire

Plan of Casa Mata and end of the Iturbide Empire

We explain what the Iturbide Empire was, how it originated and its economic measures. In addition, its characteristics, politics and its downfall.

What was the Iturbide Empire?

The empire of Agustín de Iturbide, also called the First Mexican Empire, was a government led by the military Agustín de Iturbide that developed in Mexico for a few months: between July 21, 1822 and March 19, 1823. Despite Its short duration, this government is of utmost importance in the history of Mexico because it was the first independent and sovereign government of this country.

Agustín de Iturbide was a prominent military man and a central figure in Mexican politics during the war of independence. First he was a member of the royalist army (in defense of the Spanish monarchy) and then he joined the insurgents and favored the victory of the Mexicans.

Although he was elected by a Congress, during his short government Iturbide won many enemies due to his bad economic policies and the dissolution of Congress. His government was overthrown by a coup , which restored parliamentary power and declared Mexico a republic.

War of Mexican independence and origin of the Iturbide Empire

The Mexican war of independence was a long political and military process that began in 1810 and ended in September 1821. This conflict originated in the current Mexican territory called New Spain , which was part of the Spanish colonies in America .

When in 1808 France invaded Spain and deposed Ferdinand VII, the inhabitants of New Spain refused to recognize French authority, that is, at the beginning the war was an act of loyalty to the Spanish king . However, throughout the eleven years that the war lasted, the interests of various groups came together and guided the struggle towards the goal of declaring Mexico an independent state from Spain.

After the union of the insurgents (led by Vicente Guerrero) with conservative groups (led by Agustín de Iturbe) and other groups in Mexican society of the time, Mexico declared its independence in the Plan of Iguala . The Plan of Iguala, also called the Plan of the Three Guarantees, was promulgated on February 24, 1821 and contained three principles: the independence of Mexico, the union of all the peoples of New Spain and the establishment of the Catholic religion. These three ideas were represented in the colors of the flag: green, red and white.

The Iguala Plan established Mexico as an independent country, but more specifically as a parliamentary monarchy that was to be led by a Spanish authority. However, the Spanish crown did not recognize Mexican independence (it did not do so until 1836) and Congress elected Iturbide as emperor of Mexico. The first Mexican emperor was crowned Augustine I on July 21, 1822.

Who was Agustín de Iturbide? 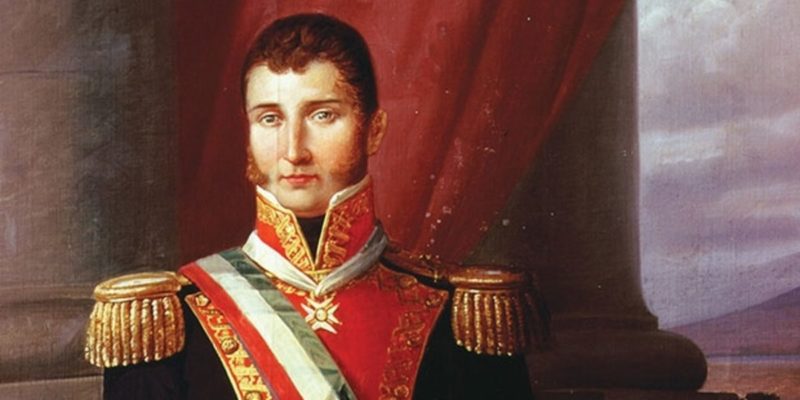 During the war, Iturbide stood out militarily and led the Trigarante army.

Agustín de Iturbide (1783-1824) was a Mexican military and politician and Emperor of Mexico between July 21, 1822 and March 19, 1823 , the day he abdicated the throne. At the beginning of the independence war, Iturbide fought in favor of the royalist forces, that is, he opposed the insurgents who sought independence from Mexico and fought these independence guerrillas.

However, in 1820 in Spain the political situation changed due to the triumph of a liberal revolution that harmed the interests of the Mexican aristocratic class, among whom was Iturbide. For this reason, in the last years of the war, the Conservatives changed their position and supported the goal of independence.

Mexico achieved independence in 1821 and the Plan of Iguala was proclaimed (a document in which Mexican independence was established) and then the Treaties of Córdoba (in which the withdrawal of Spanish troops was agreed).

During the war, Iturbide stood out militarily and led the Trigarante army, which brought together the royalists and the insurgents (led by Vicente Guerrero). This made him an attractive candidate for the government, for which he was elected emperor, under the name of Augustine I, and appointed by Congress.

Geographic extension of the Iturbide Empire 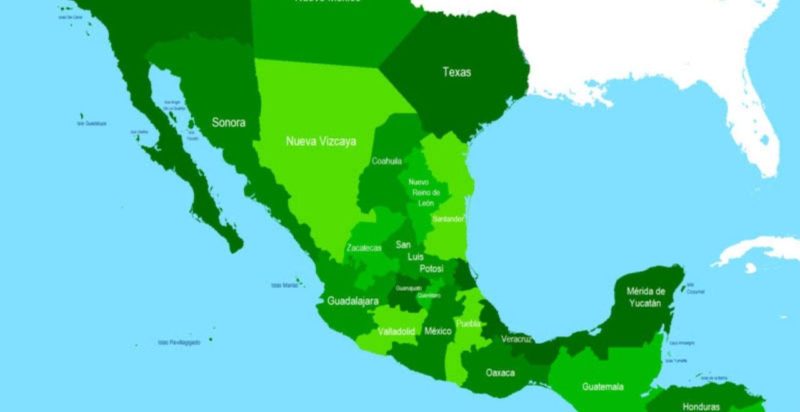 During the Iturbide empire, Mexico had its greatest geographical extension . This was due to the annexation of the provinces that had simultaneously declared independence from Spain.

Mexico’s borders included California, New Mexico, and Texas to the north, and all of Central America to Costa Rica to the south. Its total area reached almost 5 million square kilometers . 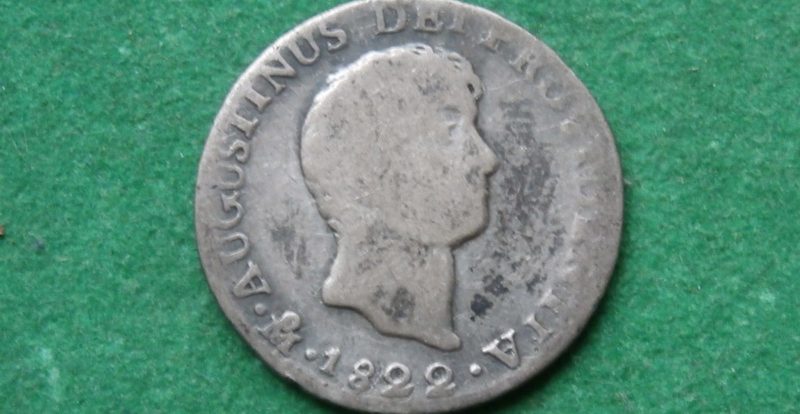 The currency began to have less value due to excess issuance.

After independence, Mexico was going through a severe economic crisis as a result of eleven years of wars and revolts . Its economic situation included debts, few sources of income, little internal market, low connection between the different territories of the empire and capital flight. The economic activities in which Mexico had excelled in colonial times (agriculture and mining ) were in crisis.

Faced with this situation, the Iturbide government tried to carry out measures to improve the Mexican economic state: it lowered taxes, contracted loans and resorted to the issuance of excess paper money that, as a consequence, lost value and generated mistrust among the population . In addition, he expropriated silver mines that were in private hands, which increased the discontent of the Mexicans.

The economic policies carried out by Iturbide were one of the reasons that widened the opposition arch that sought to remove the emperor.

Politics of the Iturbide Empire

Agustín de Iturbide assumed the Mexican throne in 1822 and dissolved Congress for lack of support. This allowed him to govern without mediation or parliamentary control, but it earned him a large number of enemies. Faced with this, Iturbide established the National Institutes Board , which was not well seen by the opponents.

To prevent discontent from being expressed, Iturbide eliminated freedom of the press and maintained a tight grip on publications. Those who in spite of everything continued to maintain their political opposition were arrested.

Some of Iturbide’s opponents were his enemies since the Mexican War of Independence. Among them stood out Nicolás Bravo, Vicente Guerreo and Guadalupe Victoria, who had been insurgents against the royalist army. Those defenders of the Spanish crown , who wanted a Bourbon representative to lead, and the Republicans, those who wanted to establish a republic in Mexico, also demonstrated against Iturbide .

Iturbide also harvested enemies among those who had been his comrades in arms, such as Antonio López de Santa Anna. This enmity was due not only to bad economic decisions made by Iturbide but also to the elimination of political participation during his government.

Plan of Casa Mata and end of the Iturbide Empire 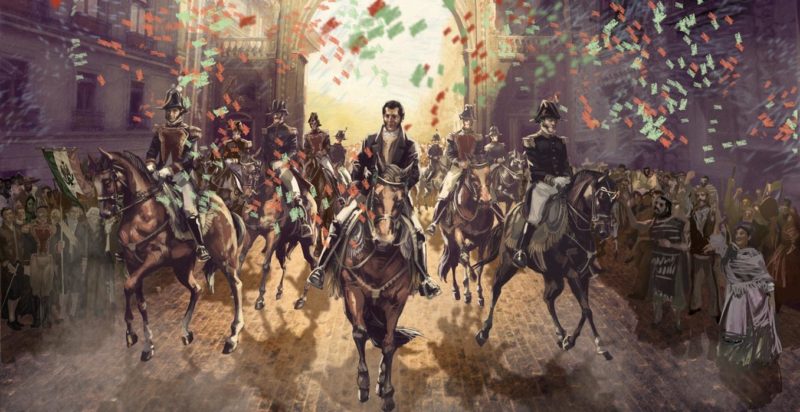 The Iturbide empire was overthrown by a coup.

From the beginning of the government of Iturbide , revolts and coups were determined to overthrow the empire . Many of these were aimed at establishing a republic in Mexico and reestablishing Congress.

On February 1, 1823, the Mexican politician and military Antonio López de Santa Anna proclaimed the Casa Mata Plan , a document in which it was established that the Mexican State would not be a monarchy but a republic and the consequent reinstatement of Congress.

With the support of soldiers such as Vicente Guerrero, Nicolás Bravo, José Antonio de Echávarri and Luis Cortázar, the coup was carried out and Iturbide abdicated.

In 1823 Iturbide and his family were exiled in Italy and the Central American territories became independent from Mexico. In April 1824 Iturbide was declared a traitor and public enemy of the State and, when he returned to Mexican territory in 1824, he was arrested and shot in Tamaulipas on July 19 of that same year.