Joan of Arc: Who Was She, Biography, Characteristics and Death 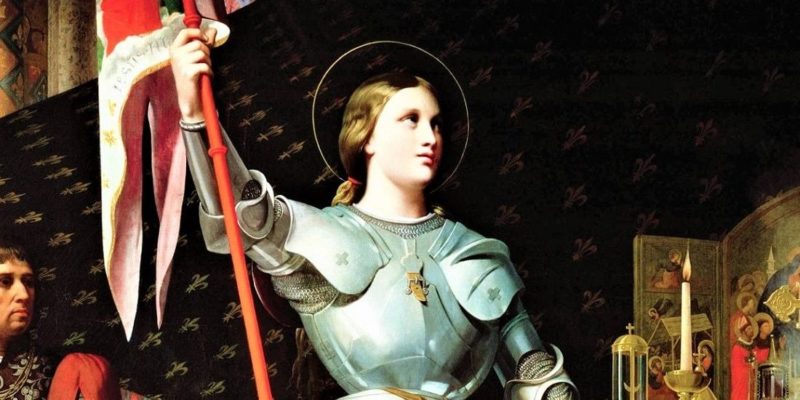 Who was Joan of Arc?

Birth of Joan of Arc

Biography of Joan of Arc

The siege of Orleans

The coronation of Charles VII

Trial and execution of Joan of Arc

We explain who Joan of Arc was and what her military life was like. What’s more. what are his general characteristics and his tragic death?

Who was Joan of Arc?

Joan of Arc ( Jeanne d’Arc in French), also known as Saint Joan of Arc or as the Maiden of Orleans, was a national heroine of France . He led the French army against the English troops in the Hundred Years War. With his help Carlos VII de Valois managed to crown himself as King of France.

Her story is well known, since despite being a peasant woman from the most humble stratum, she managed to lead the French army at just 17 years of age . He claimed that the voice of God led her into battle. Many possible explanations for the voices I heard have emerged over time, from schizophrenia to cunning to deep religious sentiment.

Today Joan of Arc is remembered as a heroine  and an example of the emancipation of women from their traditional social roles . It was also frequently used as an inspiration for French troops during the First and Second World War . His life has been represented in numerous theatrical , cinematographic and animation works.

Birth of Joan of Arc

Joan of Arc was born in the Villa Domrémy , now Domrémy-la-Pucelle in her honor, in north-eastern France.

The exact date is unknown, since at the time there was no registration of births , especially for commoners.

However, in his interrogation at the hands of the clergy, on February 21, 1431, he claimed to be “around nineteen years old,” which would mean that he was born in 1412.

Her birth name was Jehanne , and in her town they called her Jeannette (“Juanita”). She was the daughter of Jacques Darc . However, the last name Juana was known by was D’arc. This modification is probably a reference to its origin in Arc-en-Barrois or Art-sur-Meurthe , very close towns.

His mother was Isabelle Romée, nickname for Isabelle de Vouthon, and she was the youngest of three older siblings . There was no need in his family, since his father owned arable land and held public office in the town. However, they were far from noble or wealthy.

Biography of Joan of Arc 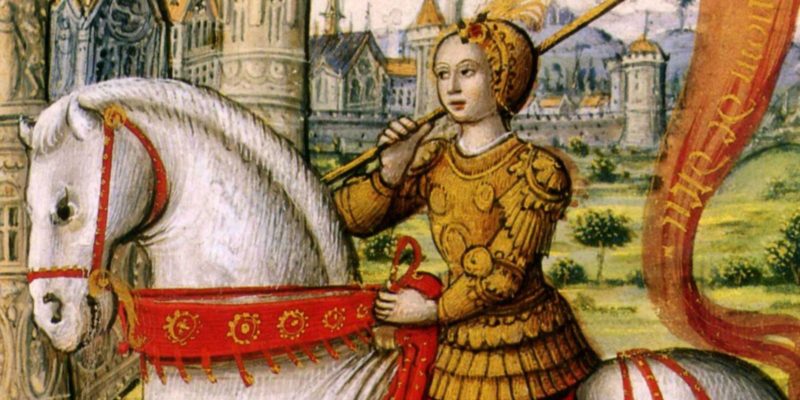 Juana said she felt the divine call to liberate the Kingdom of France.

Juana was an illiterate young peasant girl , that is, she belonged to a sector of society that normally did not reach fame or have the influence on French politics that she had. But Juana distinguished herself in the first place by feeling the divine call to liberate the Kingdom of France from the English and crown the dauphin, Charles VII.

Commanding an army of 5,000 men, Juana fulfilled her mission, turning the balance in favor of the French side and the Orleans faction. Thanks to his intervention, Carlos VII reached the crown of France.

However, from that moment on, circumstances became more difficult for her. The political intrigues behind the throne exceeded her . Her enemies eventually handed her over to the Burgundians, who in turn handed her over to England .

She was brought before the Inquisition to be tried for heresy. The court sentenced her to the stake and so she died in 1431. 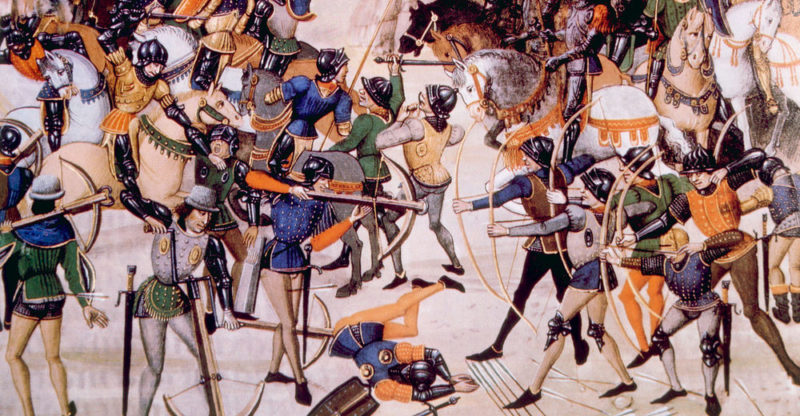 The Hundred Years War claimed the lives of more than one hundred thousand people.

The rivalry between France and England dates back to at least 1066, when William the Conqueror, Duke of Normandy, conquered the English throne at the Battle of Hastings. In 1337 the English reclaimed the properties they erected on French lands . Thus began the so-called Hundred Year War, although it actually lasted 116.

During this period a civil war broke out in the Kingdom of France. This internal conflict was due to the fact that the French royal family had divided into two factions regarding who should legitimately inherit the throne. England intervened supporting her Burgundian allies.

This conflict claimed the lives of more than one hundred thousand people and left a large portion of the territory of France devastated. It finally concluded with the withdrawal of the English troops in 1453. When Juana intervened in this conflict, in 1929, the confrontations had been going on for almost a century.

According to Juana herself, from the age of thirteen the voice of God was manifested to her , when she was in her father’s garden. This voice came from the side of the church and also emanated enormous clarity, which is why, despite her fear, Juana understood that it was of divine inspiration.

The voice began to speak to her two or three times a week , although she did not always understand its message. Finally the voice instructed him about his mission in life, which was to lift the siege of Orleans and reestablish the throne of France.

These voices were later identified by Juana as those of Santa Catalina de Alejandría and Santa Margarita de Antioquia, two of the saints most venerated by Catholicism of the time . The first voice to contact her, on the other hand, had been from Saint Michael the Archangel.

The siege of Orleans 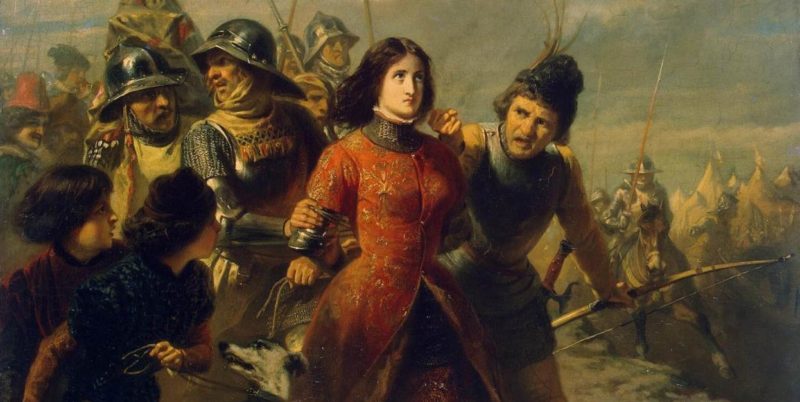 Joan of Arc was in command of five thousand men.

Juana’s voices led her to break the siege that had plagued the city since 1428 . For this she went to Robert de Baudricourt, commander of a French garrison, to request a small escort to take her to speak with the Dauphin, to whom she had to give a secret message dictated by the voices.

At that time there were rumors that predicted the salvation of the kingdom by the Virgin of Lorena through a woman (surely the posthumous daughter of King Carlos IV, now deceased). Thanks to these popular beliefs and her insistence, Juana achieved her mission: dressed as a man, she was taken through hostile territory to see the prince.

After various priests and theologians examined her, the prince ended up trusting in the divinity of Juana’s voices . He gave him an army of 5,000 men, with the aim of lifting the siege of Orleans, one of the main cities of the time.

There are different versions regarding Juana’s role in the siege. Some historians say that he held up the banner and boosted the morale of the troops ; others say he fought fiercely alongside his men.

Having consolidated her vocation, Juana was placed at the head of the French army , which then began its first offensive campaign in more than a generation: the Loire Campaign. After the lifting of the siege of Orleans, this campaign conquered the main bridges over the Loire River.

The importance of bridges was due to the fact that, by controlling them, the army could prevent the enemy from communicating its two fronts . Thus, the French territory was divided in two.

The coronation of Charles VII 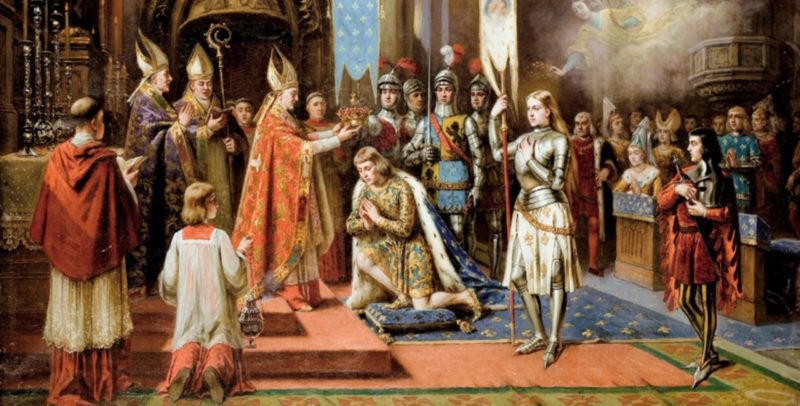 With the coronation of Carlos VII, the exploits of Juana reached their maximum point.

Among Juana’s divine missions was to accompany the Dauphin to Reims, where he was to be crowned the legitimate king of France . The mission was dangerous, since the entire road was besieged by Burgundian troops.

However, the fame of the Maid of Orleans was already so great that the populations in her path were affected by the Dauphin , fearful of the military prowess of Juana.

The road involved besieging Troyes, and following Juana’s advice, it was done from July 5 to 10, when the Burgundians surrendered. Thus, on July 17, the Dauphin was in Reims and Juana’s exploits reached their peak.

After the coronation, a temporary peace was signed with the Burgundians and the troops of the new monarch marched on Paris. Control of the capital was necessary to legitimize the power of the king. However, the siege was a complete disaster and the royal troops withdrew on September 10, with Juana wounded by an arrow in the thigh.

Ignoring Juana’s voices, the King now changed his strategy. He sought peace with the Burgundians to face jointly with the English. This strategy greatly weakened the French army. The truce was broken in 1430 and Juana resumed command of the troops. His last victory was in April of that year.

Finally, at Compiègne on May 23, French troops were besieged by both an English and a Burgundian army. There Juana was captured.

Trial and execution of Joan of Arc 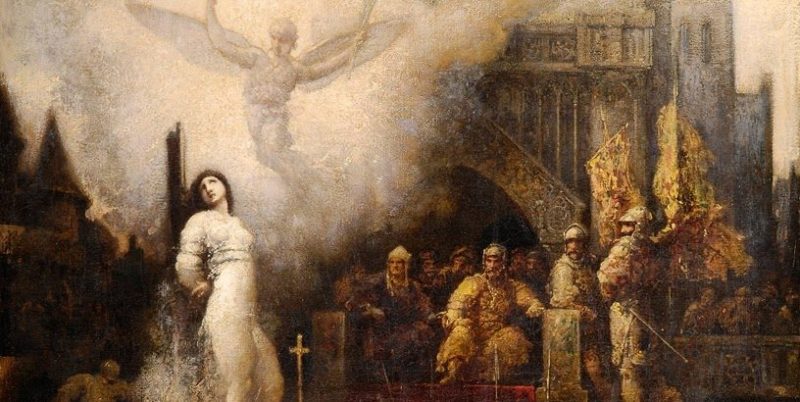 Joan of Arc was executed in the Old Market square in Rouen.

Juana was imprisoned and accused of heresy . She was subjected to rigorous questioning in front of nearly 120 accusers. She was found guilty on more than seventy counts, including “making up false revelations and divine appearances” and dressing like a man.

She was sentenced to die at the stake, an execution that took place in the Old Market square of Rouen on May 30, 1431 .