King Arthur: Who Was He, Story, Characters, Works and History 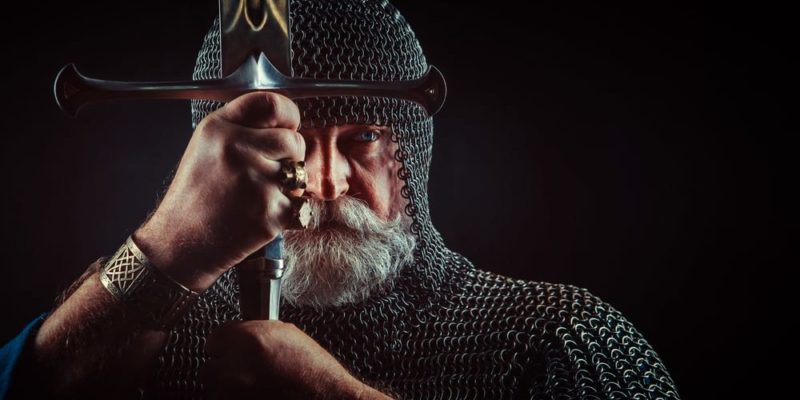 Who was King Arthur?

Origin of the legend of King Arthur

Summary of the tale of King Arthur

Excalibur and the Lady of the Lake

Camelot and the Holy Grail

The knights of the round table

King Arthur in the movies

We explain who King Arthur was, how his legend originated, and the characters that make it up. In addition, its characteristics and works.

Who was King Arthur?

King Arthur, also called Arthur of Pendragon, is the central character in a legendary British tradition, narrated in numerous medieval romances (known as the “Matter of Britain”). It occupies a central place in various European literary traditions, especially English and French.

It is a fictional character, originally from the Celtic tradition, around which there are numerous myths, legends, and later stories. Different theories also developed around the fact that he could have been a real person during the early Middle Ages.

Generally, King Arthur is conceived as the ideal, just, and brave monarch, both in times of peace and war. Legend holds that he was chosen by supernatural forces for the government. His death occurs at the hands of his own son.

Origin of the legend of King Arthur

There are no reliable archaeological testimonies that allow us to know how the legend of Arthur originated. Instead, it appears in numerous ancient texts of a more or less literary nature.

One of them is Historia Regnum Britanniae (“History of the British Kings”, circa 1130) by Geoffrey of Monmouth.

It is a pseudohistorical chronicle of the kings of Great Britain in which King Arthur is mentioned.

It also appears in two earlier texts: Historia Brittonum (“History of the Britons”, circa 833) by a supposed Welsh cleric named Nennius, and Annales Cambriae (“Annals of Wales”, sometime in the 10th century).

According to these sources, King Arthur was a British-Roman warlord who led the defense of Britain against the Saxon invaders in the early 6th century.

However, there are other theories regarding its origin. For example, he is related to a Roman military man named Lucius Artorius Castus who lived in the second century. It is also similar to the monarch Athrwys ap Meurig, who ruled Glamorgan and Gwent in South Wales in the 6th century.

Summary of the tale of King Arthur 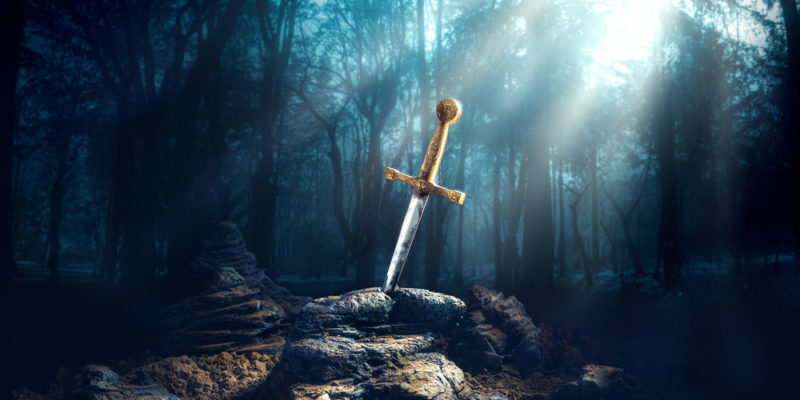 Arthur was crowned when he managed to withdraw the sword from the stone.

The legend of King Arthur can be summarized in three cycles:

Excalibur and the Lady of the Lake 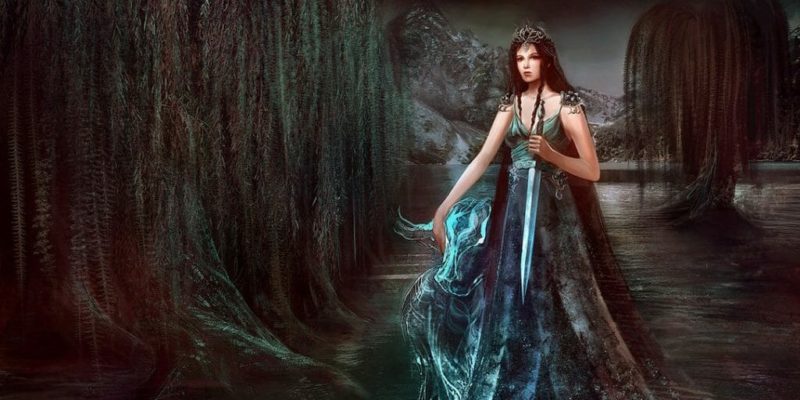 The Excalibur sword was owned by a mysterious Lady of the Lake.

One of the best-known stories in the Arthurian imagination has to do with the sword enclosed in the stone, which only the chosen one could withdraw and be crowned king. In some versions, this sword is Excalibur. But others indicate that, after obtaining it, Arthur loses his first sword and replaces it with Excalibur.

This magic sword is owned by a mysterious Lady of the Lake to whom the magician Merlin leads him. The mysterious woman gives him the new sword and a prophecy: “as long as you carry it, you will not lose any blood, but one day a woman you trust will arrive and steal it from you.”

This is fulfilled later, when Arthur has his son Mordred in an incestuous affair with his sister or half-sister Morgana Le Fay or Morgause, depending on the versions. In some of them, Mordred is his nephew. In any case, jealous of Arthur’s marriage to Guinevere, Morgana snatches the Excalibur sword from him and throws it into a lake.

Camelot and the Holy Grail 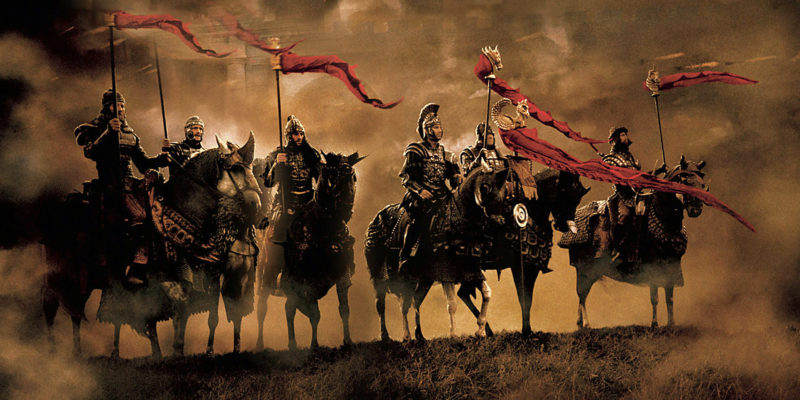 The Knights of the Round Table sought the Holy Grail of Jesus Christ.

Camelot is the name of Arthur’s castle, where he surrounds himself with the bravest knights, with whom he founded the Round Table. During a long period of peace, Arturo meets his wife Guinevere, with whom he will marry and be happy, until the arrival in Camelot de Lancelot (Lanzarote), with whom the queen will secretly fall in love.

The adventures of the Knights of the Round Table are told around the search for the Holy Grail of Jesus Christ, a Christian relic with magical properties. Most of them will fail and perish in the attempt, facing monsters, dragons, sorcerers and enemy knights.

The knights of the round table

Some of the most famous Knights of the Round Table were: 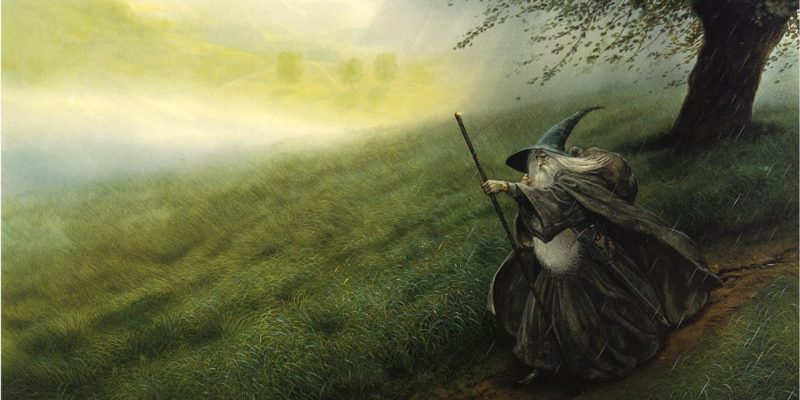 In Merlin, the hermit, the magician, the shaman, and the prophet merge.

There are many legends about the famous Welsh magician Merlin, some of which claim that he lived in the 6th century. However, it is often stated that “Merlin” was not a name but a title, that is, a position at court, similar to the title of Druid.

In the numerous stories in which he is named, various archetypes associated with magic converge in the figure of Merlin: the hermit, the magician, the shaman, and the prophet.

The so-called “Matter of Britain” is a very important set of European stories compiled in medieval texts, generally as a result of translations from Celtic and later Christian inventions. There the various stages of the legend of King Arthur and the Knights of the Round Table are narrated.

In addition, other myths and parallel stories also appear in this set of stories. They are carried out by characters such as Brutus of Troy, Old King Cole, King Lear, or Gogmagog.

The literature Arthurian is too extensive to be listed, there are so many works that would be impossible to list them. But they can stand out:

King Arthur in the movies 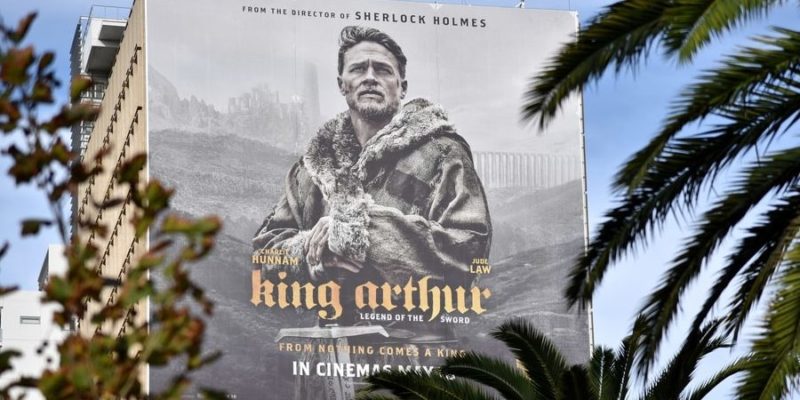 The Guy Ritchie-directed film is the latest on the legend.

This legend has inspired numerous films, such as:

There is no reliable historical way to prove the actual existence of a King Arthur, no known monarch of Great Britain had that name. But there are different interpretations as to whether it was a pseudonym. Some theories hold that the name is of Latin origin. Others, that it is a deformation of Celtic voices.

For example, there was a British warlord Owain Ddantgwyn who reigned in Powys, Wales, at the end of the 5th century, and was nicknamed “the bear”. And since bear in Gaelic is pronounced arch and in British language the suffix - our means “man”, it is possible that Arthur meant “man-bear” and that in time he became Arthur, Arthur.