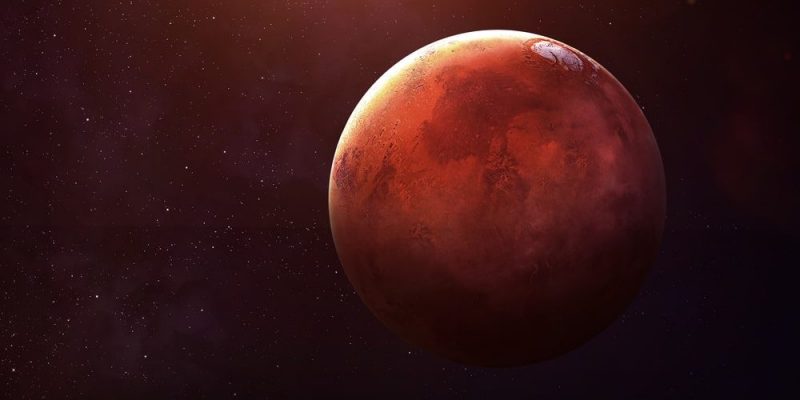 We explain what Mars is and what are the main characteristics of this planet. Also, how is its atmosphere, geology and more.

We call the fourth planet in our Solar System Mars , counting from the Sun at its center. It is the second smallest after Mercury .

Its orbit is after the Earth’s and its reddish appearance is due to the large amount of iron oxide on its surface.

Mars is a planet that has drawn the attention of humanity since ancient times, in part because it is easily observable from Earth .

Its reddish tone is even distinguished because it is one of the largest objects in the sky (after the Moon , the Sun, Jupiter and Venus ).

But it also has the peculiarity of being a planet similar to Earth . For this reason, it has captured the imagination as a possible destiny for a humanity that abandons its own planet, or on the contrary, as a source of intelligent life that declares war on us: the “Martians”.

It is one of the inner planets of the Solar System (those between the Sun and the asteroid belt ), along with Mercury , Venus, and Earth .

Mars has been observed since ancient times by humanity and for this reason it has received many names.

The ancient Babylonians called him Nergal , after their god of pestilence and death.

The ancient Greeks associated him with Ares, their god of war.

The name Mars is the Roman version of the same deity, whom the Greeks imagined as the consort of the goddess Aphrodite (Venus). 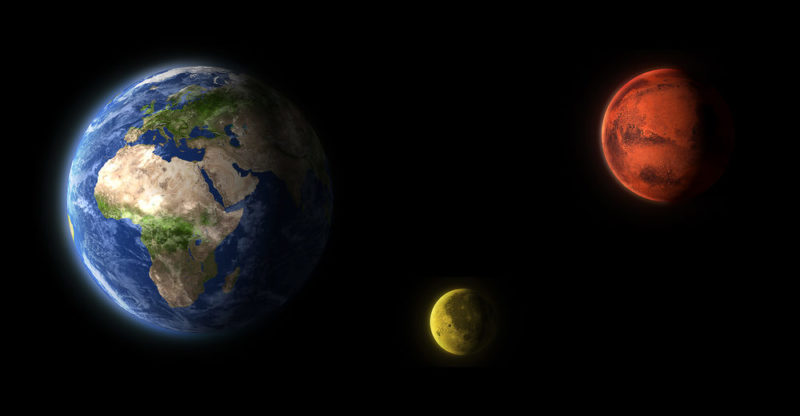 Mars is a slightly ellipsoidal planet, with a diameter of 6,974.4 km at the equator and 6,752.4 km at its meridians, which is almost half the diameter of the Earth.

This means that it has 15% of the Earth’s volume and almost 11% of its mass, thus having a lower planetary density and therefore less gravity (38% less than Earth’s). 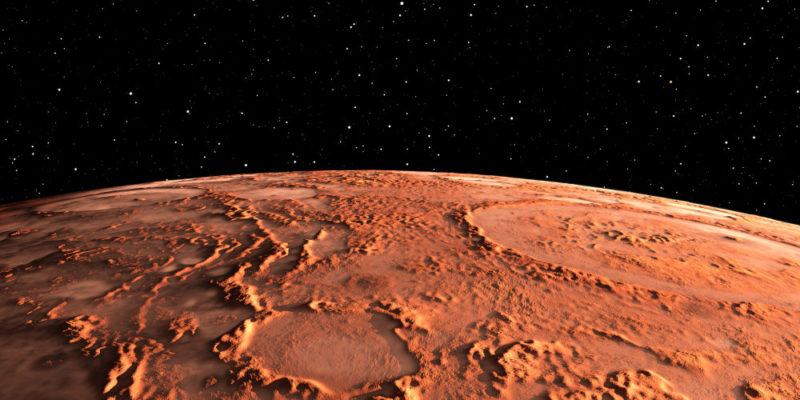 The atmosphere of Mars is 95.3% carbon dioxide.

The Martian atmosphere is very thin, generating an atmospheric pressure much lower than that of Earth (7 to 9 hPa, compared to 1013 hPa on Earth).

Many of these data require revision given the recent discovery of frozen water at their poles .

On the other hand, there is an ozone layer similar to the terrestrial one but 1000 times thinner, just 40 km high.

This layer would be too weak to block ultraviolet radiation from the Sun.

This enormous variability between day and night is due in part to Mars’ greater distance from the Sun, as well as to the weak atmosphere that is unable to retain heat.

Temperatures as low as -130°C can be recorded on the planet’s polar ice caps . 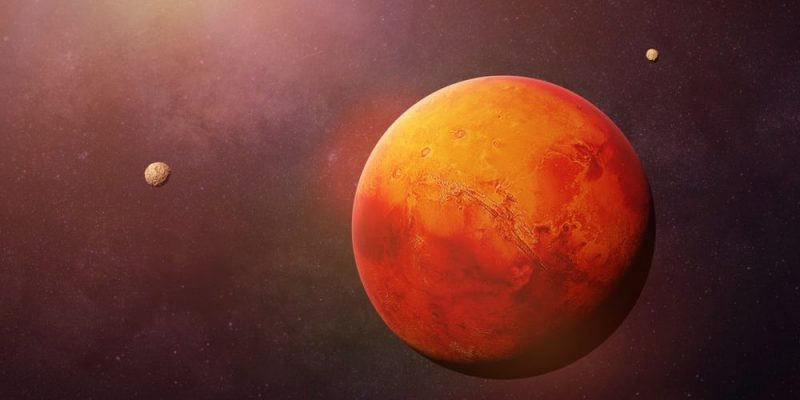 The moons of Mars are thought to be larger asteroids.

Mars has two moons , whose names come from the sons of the homonymous god in classical Greco-Roman mythology: Phobos (“fear”) and Deimos (“terror”).

The orbits of these moons are extremely close to those of the planet , and they are accompanied by some other much smaller satellites called “Trojan asteroids”.

For that reason it is thought that the two moons would be larger asteroids that were captivated by Martian gravity. 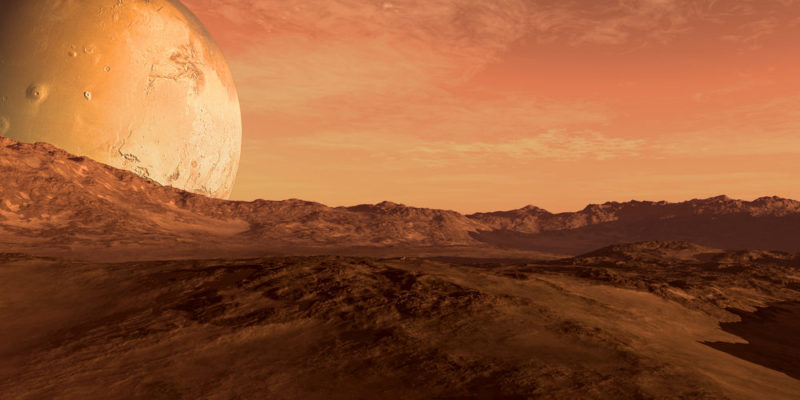 On Mars sand predominates, creating an arid and cold environment.

The Martian crust is rocky, abundant in silicon and oxygen minerals , as well as various metals , with a high content of iron oxides .

Its soil is volcanic; it presents faults and other pronounced depressions . On this planet is the highest mountain in the Solar System, Mount Olympus (22.5 km high).

The marks on the surface and the lava plains suggest that it was the scene of major seismic , volcanic or meteorite impact events .

There is no liquid water on Mars, since the atmospheric pressure would not allow it.

However, it is known that there are two caps on its poles that seem to be formed by water . It is estimated that, if they melted, they could cover the planet ‘s surface to a depth of 11 meters.

In 2013 , the analysis of samples from the Curiosity rover was published , according to which there would be between 1.5 and 3% water on Mars.

However, more recent studies have shown the appearance of liquid water in some regions of the planet, depending on the weather season. 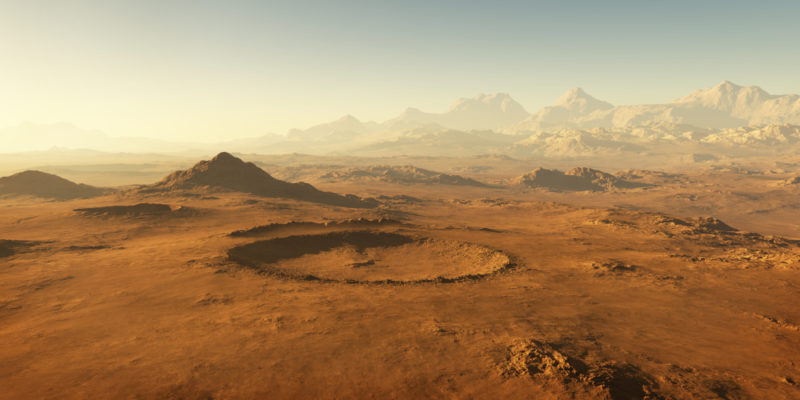 The lack of liquid water discourages theories of possible life on Mars.

There was always the suspicion or hope that there was life on Mars, or perhaps the conviction that there once was.

Many astronomical observers even claimed to be able to distinguish technological structures on its surface, although these were later shown to be simply features of its topography.

The lack of liquid water that allows life as we understand it on our planet discourages such theories.

However, some geological studies suggest that there was once a denser atmosphere on Mars and large areas of water, in which life could have occurred .

Another unknown in this regard is the detection of traces of methane in its atmosphere , which is very unstable under these conditions and could be of biological origin. 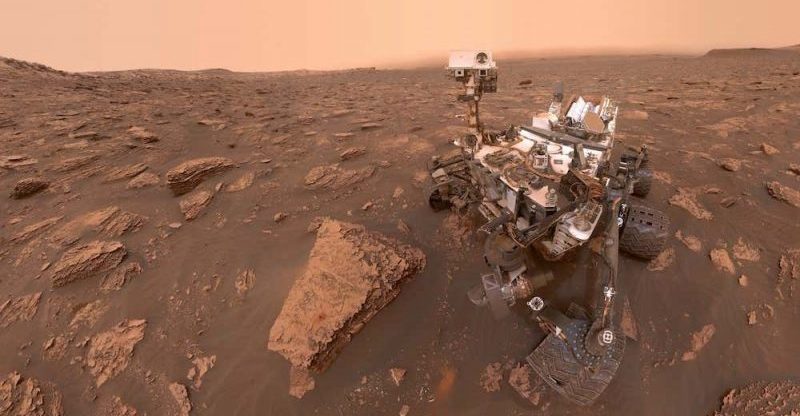 Curiosity is the heaviest vehicle placed on Mars.

There have been few space missions to discover the red planet. So far none have had a crew .

Only more or less automated robotic devices have been sent, designed for exploration, atmospheric analysis and collection of samples from Mars.

The first of more than 40 missions to the planet began in 1960, with the US Mariner 9 being the first to orbit the planet in 1971, Mars Pathfinder the first to conduct chemical analyzes of soil rocks in 1997, and Curiosity in 2011. the heaviest vehicle placed on the Martian surface.

Like all the planets in our system, Mars moves along an elliptical orbit around the Sun.

It has an axial tilt similar to that of the Earth , which is why its seasons are quite similar to ours.

Mars is 230 million kilometers from the Sun and it takes 687 Earth days to complete its orbit (1 Martian year). On the other hand, Martian days are quite similar to Earth days, since they last 24 hours, 39 minutes and 35.244 seconds.