How was the 1985 Mexico Earthquake?

The magnitude of the Mexico earthquake

Aftershocks of the Mexico earthquake

Victims and damages of the earthquake in Mexico

Humanitarian aid during the earthquake in Mexico

Economic consequences of the Mexico earthquake

Political consequences of the Mexico earthquake

Social consequences of the earthquake in Mexico

Legal consequences of the Mexico earthquake

We explain everything about the 1985 Mexico earthquake, its main causes, consequences, and general characteristics.

How was the 1985 Mexico Earthquake?

The 1985 Mexico earthquake was a seismic movement that occurred on Thursday, September 19, 1985, at 7:17 am (local time) and whose epicenter was located in the Mexican Pacific Ocean, on the coast of the State of Michoacán.

The earthquake had a magnitude of 8.1 on the Richter scale , being the most violent and deadly in the history of the nation, affecting numerous cities in central, southern, and western Mexico, and leaving the 1957 earthquake in oblivion, which had until then for the worst ever suffered in the region.

The direct consequences of the 1985 earthquake were catastrophic, in terms of fatalities, injuries, demolished infrastructure and reconstruction difficulties, as the earthquake itself was followed by an aftershock a day later, on September 20, which devastated the structures already softened by the first earthquake.

The earthquake was particularly damaging to Mexico City, the nation’s capital.

The magnitude of the Mexico earthquake 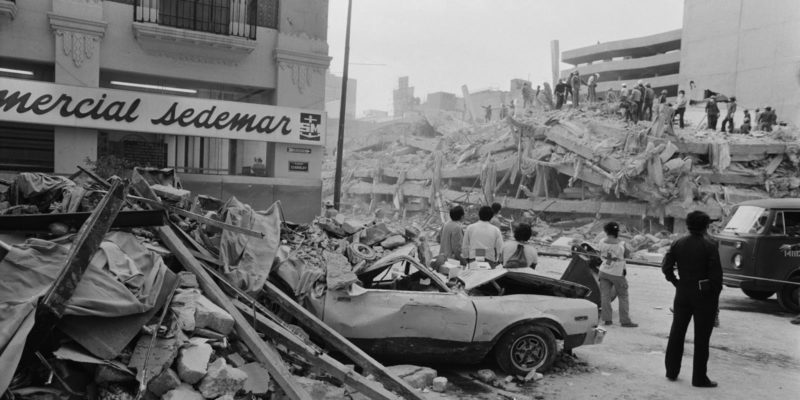 As has been said, the earthquake registered about 8.1 degrees on the Richter scale and lasted for two minutes. It was both vibratory and oscillatory at the same time, releasing the energy equivalent to 1,114 20-kiloton atomic bombs at the same time.

It was located at the mouth of the Balsas River, between the states of Michoacán and Guerrero, about 15 km deep from the earth’s surface.

Aftershocks of the Mexico earthquake

The earthquake presented several subsequent aftershocks, the most important of which occurred a day away, with an epicenter in Zihuatanejo, Guerrero, with a magnitude of 7.5 on the Richter scale. This earthquake produced a tsunami in Ixtapa-Zihuatanejo with waves 15 meters high.

Another aftershock occurred on April 30, 1986, with a magnitude of 7.0 on the Richter scale and its epicenter in the State of Michoacán.

Victims and damages of the earthquake in Mexico

Total damages were estimated at the US $ 8 billion.

The total number of victims and injured from the earthquake is unknown, although it is estimated between 6000 - 7000 people died (official figures) and 10,000 (later estimates). Some figures, however, point to almost 40,000.

Total damages were estimated at the US $ 8 billion: 250,000 homeless, 900,000 homeless, and rescue work extended over more than a month. The removal of the debris lasted up to ten years after the earthquake.

In addition, the absence of civil organization measures and government inaction and disorganization led society to a state of absolute chaos after the earthquake, the consequences of which were added to those of the natural catastrophe. 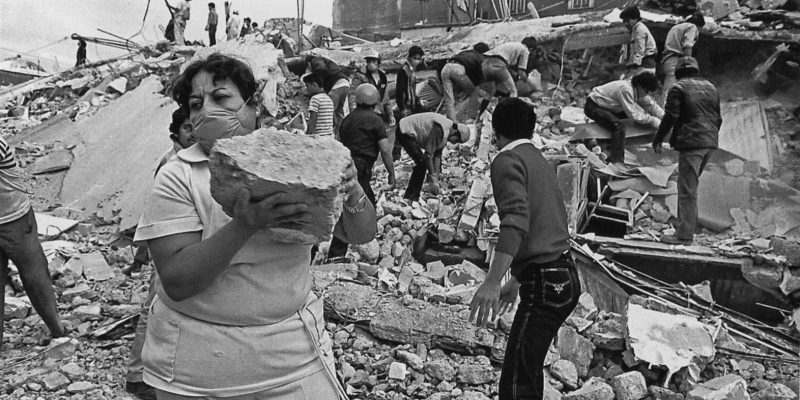 The total of rescued survivors oscillates the 4,000 people.

Rescue work lasted weeks after the initial earthquake, and people could be extracted alive from the collapsed buildings up to 10 days after the earthquake. The total of rescued survivors oscillates the 4,000 people.

The bodies recovered, on the other hand, were so many and so prolonged that as of September 22 they were destined for mass graves in local cemeteries. Initially, they had been transferred to federal authorities, totally collapsed by the number of victims, and then to Delta Park, where formaldehyde, lime, and ice were used to try to delay the decomposition of the numerous unacknowledged bodies.

Humanitarian aid during the earthquake in Mexico

The collaboration of various countries was numerous: 220 flights from 37 different countries with food, belongings, rescue tents, and volunteer personnel. The rescue material added between September 20 and October 9 was about 1,336 tons.

However, the administration of humanitarian aid by the government of Miguel de la Madrid Hurtado was cause for suspicion and criticism, as well as accusations of irregular distribution, mismanagement, and even corruption. So much so, that on October 3 the Supervisory Committee of Donations Destined for the Attention of the Victims and Reconstruction of the Affected Areas was created, to ensure the correct destination of the numerous donations.

Economic consequences of the Mexico earthquake 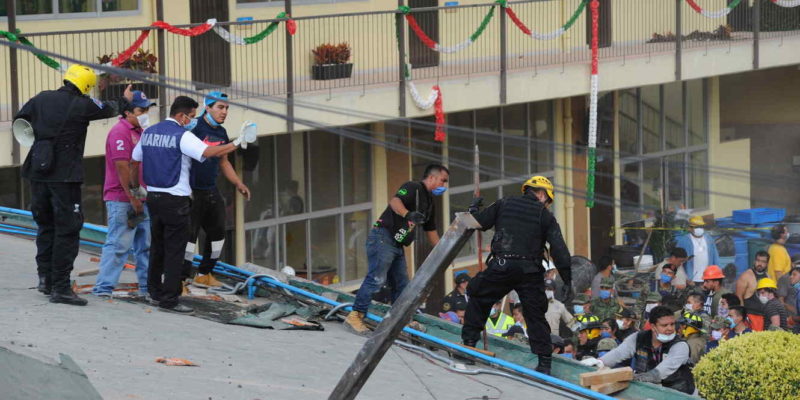 There were at least 30,000 structures destroyed.

Political consequences of the Mexico earthquake

The absolute climate of disorganization that characterized the first hours of rescue work and the lousy government handling of the situation, produced much rejection of the ruling party’s (PRI) management and led citizens (especially in Mexico City) to a voluntary movement of rescue actions that produced networks of collective solidarity and the strengthening of certain community ties.

Shortly after the earthquake, in addition, the first protest movements took place demanding better conditions of care, demand for housing, and spaces for basic services. The Unique Coordinator of Victims was created, an organization that brought together the demands of the numerous groups of affected residents and that, gradually, constituted a set of popular protest movements and citizen organizations of political and social importance.

Social consequences of the earthquake in Mexico

Numerous “epidemics” of depression, collective psychosis, post-traumatic stress, and violently neurotic attitudes were reported that merited the intervention of more than a thousand trainers from the Coordination of Psychiatry and Mental Health of the Mexican Institute of Social Security.

Legal consequences of the Mexico earthquake

Many structures were unsuitable for standing on clay soil.

Post-earthquake analyzes made it possible to determine that most of the collapsed buildings were of recent manufacture (30 years), while the main structures from previous centuries withstood the impact.

Many of the fallen buildings showed inadequate structures to be erected on clay terrain such as the one that showed the greatest damage during the earthquake (in Mexico City ), which exposed not only the absence of specific regulations for the anticipation of this type of disaster. in construction, but numerous irregularities in the area pointed to kickbacks and poor planning.

However, there was no true trial of the builders, not even in scandalous cases like that of the state construction company, responsible for countless schools and colleges that collapsed during the earthquake, leaving many students injured and dead. 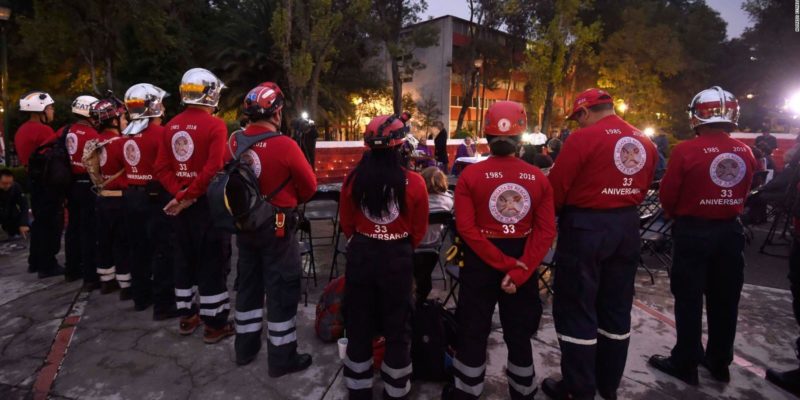 The Parque del Sol was built where the Nuevo León Building was in Tlatelolco.

At present, the victims of the 1985 earthquake are commemorated in three places in Mexico City: the Plaza de la Solidaridad, located on a site whose buildings all collapsed; the Parque del Sol, built on the site of the Nuevo León Building in Tlatelolco; and the Monument to the Seamstress, adjacent to the premises of the Association of Seamstresses and Seamstresses September 19.