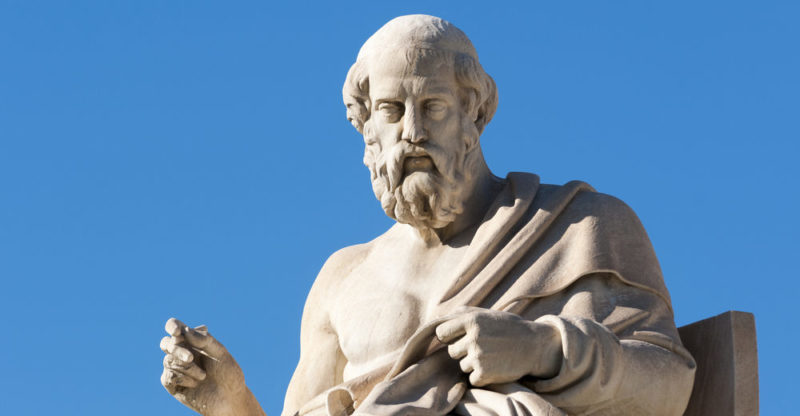 We explain who Plato was and what his stages of thought were. In addition, his link with Socrates and main contributions.

Plato was a Greek philosopher born in Athens who lived between 427 and 347 BC. C. and his real name was Aristocles . Throughout his life he showed interest in politics and considered that this discipline should be based on philosophy as the basis of its foundation.

In 387 BC C. founded the Academy, a philosophical school that lasted for 900 years and in which mathematics , medicine, rhetoric, astronomy , among other disciplines , were taught . The classical philosopher Socrates (470 – 399 BC) was Plato’s teacher and the philosopher and polymath Aristotle (384 – 322 BC) was his disciple.

Among the most outstanding contributions of Plato, the Theory of ideas stands out (it consisted of the differentiation between the world that is perceived through the senses and what is known through reason), which was represented in the allegory of the Myth of the cave and the tripartite theory in which he recognized the immortal soul divided into three parts within a mortal body.

Plato’s philosophy was recognized as one of the pioneer ways of thinking in recognizing the matter-soul duality , which considered the soul part of the world of ideas (since it could not be seen) and the body as a material prison for the soul.

In addition, he raised concepts such as immortality, learning in the development of the human being and knowledge through reason as the only way to access the truth.

In the period of maturity Plato reached his most outstanding imprint as a philosopher.

Plato’s philosophical work through the written dialogues is divided into four periods:

There is a misconception that Socrates and Plato were the same person, but this is not the case. The confusion arose because several of Socrates’ dialogues were replicated on paper by his disciples, including Plato.

Among the most important works of Plato stand out:

The Myth of the cave exemplifies how the mechanism of access to knowledge works.

The Myth of the Cave is an allegory, that is, a symbolic literary representation and not a real anecdote. It tells the story of some prisoners who were born chained inside a cave (which they never saw outside of it) and who could only see the back wall on which shadows were projected. Since the prisoners had not met other real people, they believed that the shadows were real human figures.

One day, one of the prisoners escaped and was able to see the world outside the cave and understood what those images reflected on the wall really were: they were the shadow of real figures that were located behind the prisoners and that is why they they couldn’t see them.

The prisoner returned to the cave to alert the rest of the prisoners about what he had just discovered, but they did not believe him because they were convinced by what they saw with their own eyes and what they knew.

This allegory that Plato created reflects what happened to himself regarding knowledge. Plato held that humans do not know the truth of things, however, they can access it through reason and the ability to think.