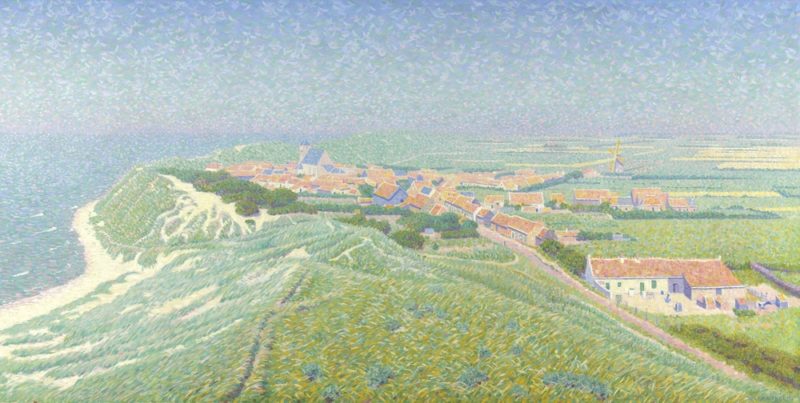 Most representative works of pointillism

Impact of pointillism on other arts

We explain what pointillism is, what were its influences and techniques that it used. In addition, its characteristics and main authors.

Pointillism or divisionism is a technique and a pictorial style that consists of creating drawings using points that, seen up close, are shown as such, but from a distance they recreate a complete and complex figure. It is framed in the schools of Post-Impressionism, although its origin lies in principles very similar to those found by the Impressionists in nature but instead of brushstrokes, the artists of this movement came to the point.

Pointillism appeared at the end of the 19th century , in the midst of a time of change at the beginning of the Industrial Revolution . Technological advance and the change in the paradigm of reality have their impact, thus, on artistic sensibilities, which are threatened on the one hand by new technical possibilities such as photography , and on the other controlled by artistic salons (considered spaces aesthetic legitimation of the time).

This new technique, thus, will explore the new textures and theories of color in art and take the legacy of the Impressionists further: paintings that close up are broken down into points and from a distance acquire their figurative harmony.

Although the name “pointillism” was and is the most popular for the technique and even for the artistic movement that proposed it —and it certainly seems very appropriate—, two of its greatest firms: Georges Seurat and Georges Signac, never officially accepted it. and they preferred the name “divisionism”, as it seemed more appropriate artistically. 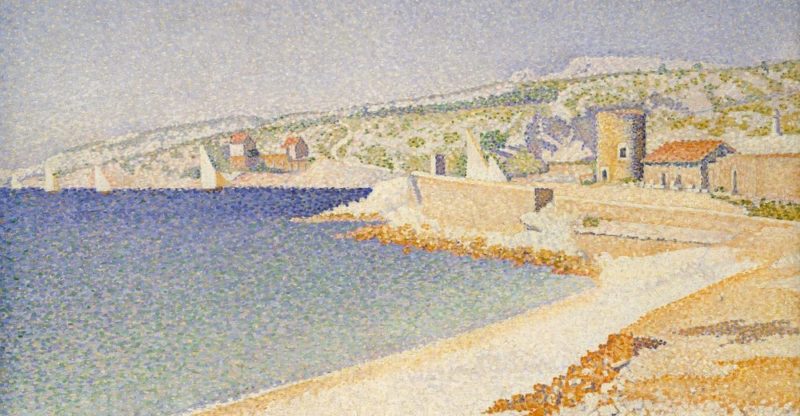 Pointillism first appeared in 1886, in the Salon des Indépendants , by the hand of the French painter Georges Seurat (1859-1891) , who explored the way in which cold and warm tones, arranged in small brushstrokes as a point , create complex visual sensations and combinations in the eye.

The technique soon won enthusiasts, such as Paul Signac , from the same artists’ salon, and became commonplace among Neo-Impressionists of the time.

The publication of Charles Blanc Gramatica Ades artes du dessin of 1865, was a fundamental text for pointillism, especially its theories about color in painting .

His postulate on the simultaneous contrast between colors and their complements , in fact, was fundamental in the way of painting of the Pointillists, as well as the scientific treatises of Cheverul, Sutter and Rood.

However, the most radical influence was the Impressionists themselves , who aspired to paint the light of reality through brushstrokes of color that, up close, were just that, but from a distance reproduced entire landscapes. 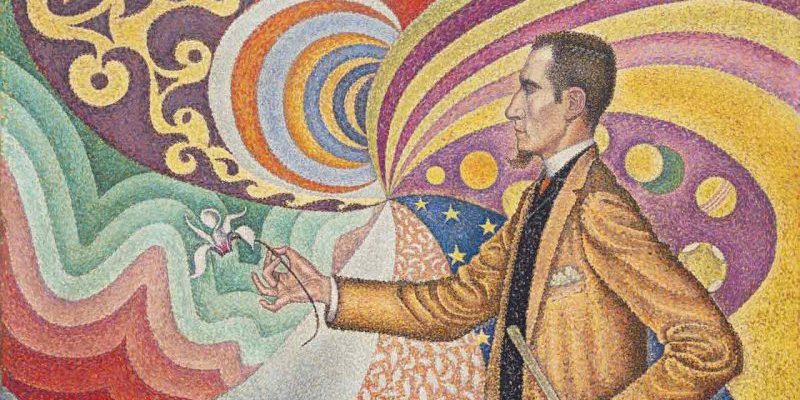 The points had to be combined with each other based on their color.

The pointillist technique consisted of applying just the tip of the brush to create round strokes like a dot. These points had to be combined with each other based on their color and the joint effect that was sought and could be done even on tiny surfaces.

In some cases, previous drawing (draft) was used since the pointillists faced their works with patience and tenacity . Then it would be the viewer’s retina that would do the work for them, gathering the dots in a frame.

The pointillists obeyed a theory of color that preferred pure colors (from the rainbow palette) since they considered the mixture of colors “dirties” them, that is, it makes them tend towards black.

The pointillists put these colors together without mixing them so that the contrast between them generated the desired visual effects, although it was common to use white mixed with some of them, to achieve a lighter tone. 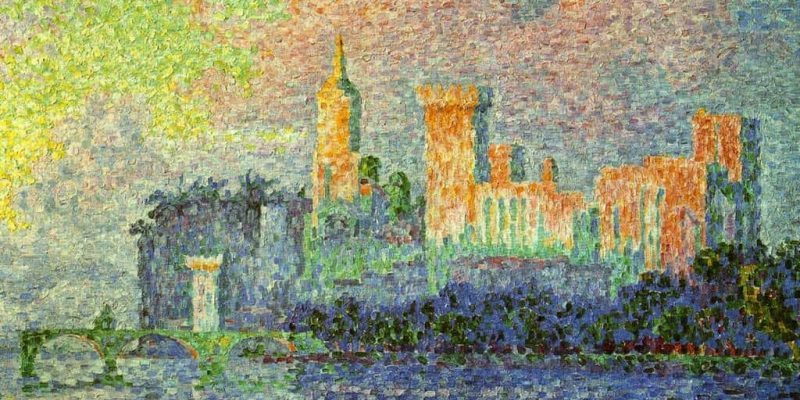 Pointillist works required a lot of planning and execution time.

Pointillists began their paintings in the open air , like the impressionists, but they finished them in the workshop since they required a lot of time to complete.

This required a lot of ordering and planning , as well as the consideration of the work of art as a millimeter effect to be reproduced , something that pointed to mathematics and logical consideration.

Perhaps that is why geometric shapes , notions of volume, and spatial arrangement gained value in his painting , but his results were often rigid and lifeless.

More than “types”, Pointillism had executions: each one depended on the mood and style of the artist who painted, despite the fact that, in principle, the chosen technique was common to all. 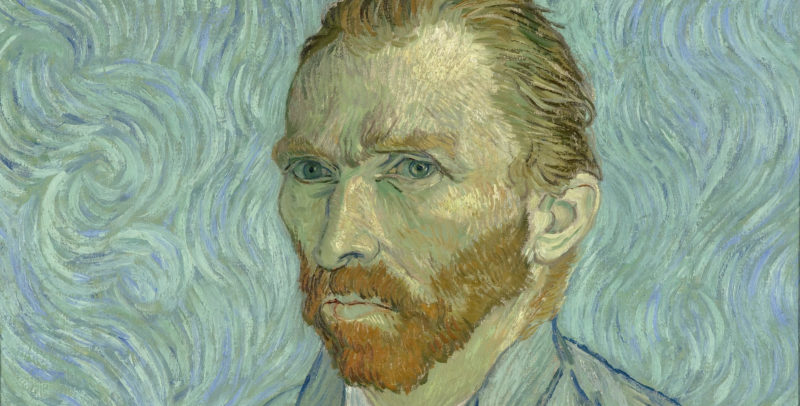 Vincent van Gogh was part of the Pointillist movement.

However, painters of the stature of Vincent van Gogh made use of the technique during some stages of their work.

Most representative works of pointillism 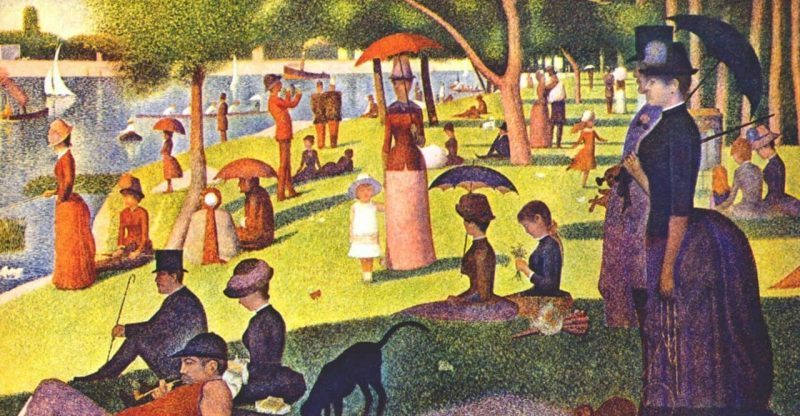 Some of the most representative works of the movement were La parade (1889) and Sunday afternoon on the island of La Grande Jatte (1886) by Seurat, Entry into the port of Marseille (1918) by Signac, Morning interior (1890) by Luce , or the famous Self-Portrait (1887) by van Gogh.

Impact of pointillism on other arts

““Musical pointillism” was called the attempts of some composers to achieve a kind of musical dissociation from the handling of isolated notes , similar to pictorial points and looking for a melodic equivalent of the chromatic theory.