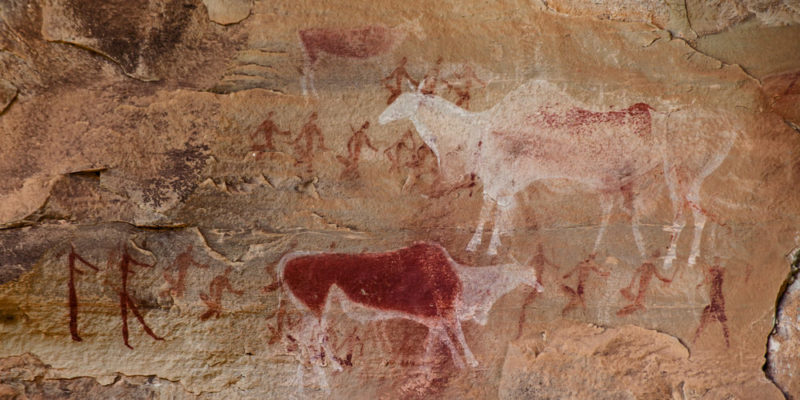 What is rock art?

Where has rock art been found?

We explain what rock art is, where it was found and the techniques that were used. In addition, its characteristics and importance.


What is rock art?

Rock art or more specifically rock painting, rock sculpture or rock engraving, is a set of prehistoric drawings that have been found in various caves or ancient stones. It reflects the imagination and concerns of primitive humanity.

They are some of the first cultural manifestations of our species . The oldest ones discovered date from the last planetary ice age, around 40,000 years ago. The rock art works are related to the petroglyphs, sculptures and engravings of their time.

Unlike other forms of prehistoric art, the paintings have remained in fairly good condition despite the passage of time . This is partly due to the materials used and partly to the protection provided by the natural support in which they are found, protected from erosion and wear. 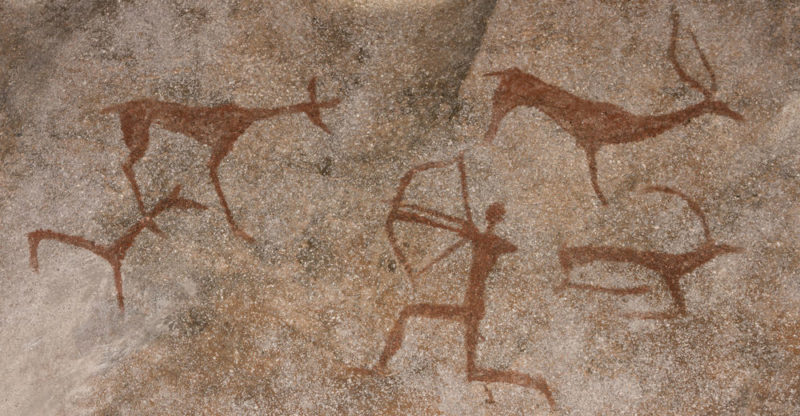 It is estimated that most of the rock art occurred between the Paleolithic and Neolithic periods.

There are no exact data on when the rock art began to occur.

Most of the time, the calculations on its temporal origin are made through measurements of the carbon-14 isotope or other residual elements in time.

However, in the caves, grottos and places where the paintings have been found, materials from different times coexist .

Furthermore, contamination of samples often leads to erroneous measurements. In any case, it is estimated that most of them were made between the Palaeolithic and Neolithic periods .

Where has rock art been found?

Rock art has been found on every continent except Antarctica . The main cave painting finds were in the highly populated regions of the Neolithic era, especially between France and Spain , in the Cantabria region.

Another important case is the one found in 2014 in Sulawesi, Indonesia , which is estimated to date back more than 40,000 years. On the other hand, Blombos caves in South Africa are considered the oldest of all (around 73,000 years old).

Other minor deposits are in: 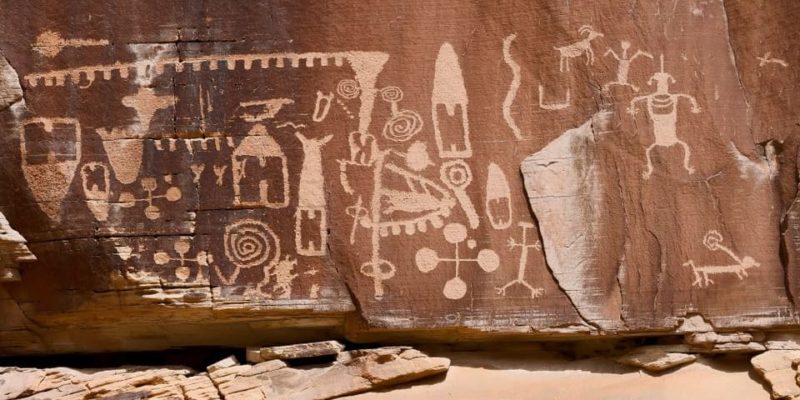 Petroglyphs are etchings of patterns on the surface of softer rocks.

There are several types of rock art, distinguishing from the technique used to do it:

The cave paintings are more or less homogeneous in terms of their subject matter. Those from the Paleolithic usually exhibit drawings of animals  and lines . In the Neolithic age, human figures, negative human handprints and other representations of the environment began to appear, such as leaves, etc.

Most of the animals depicted in them are mammoths, bison, horses , wild pigs, deer and reindeer , usually in full hunt, or wounded with arrows or spears. Usually one or two colors dominate, in shades that go between black, red, yellow and brown. 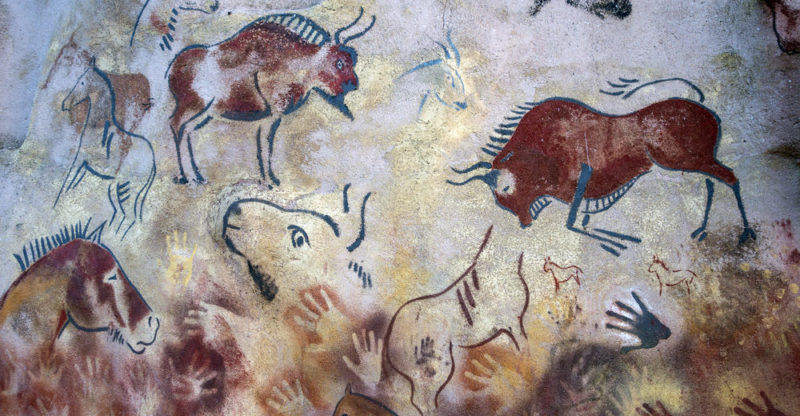 Fingers, feathers or pieces of wood were used to smear pigments on stone.

The cave paintings were all made with similar materials , despite being thousands of kilometers from each other. Pigments from charcoal, feces, blood, and other bodily fluids were generally used .

Among the minerals used were hematite, manganese oxide or mixtures such as clay . As a binder for these substances, some type of animal fat or oil was used.

These pigments (of organic or mineral origin) were smeared on the stone with the fingers or instruments such as bird feathers or pieces of wood were used . In some cases it was scraped with a stone or tool to generate realistic and three-dimensional effects.

In the cases of sculpture and engraving, on the other hand, stones of a more resistant material were used to sculpt the softer ones . Patterns or figures were printed on its surface or to sculpt it into three-dimensional shapes. 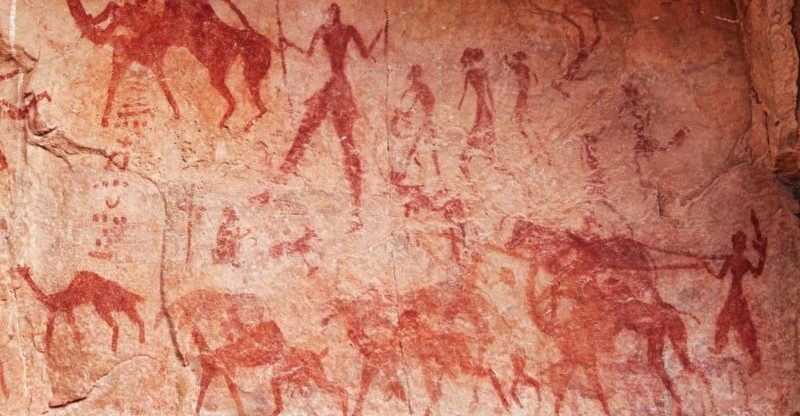 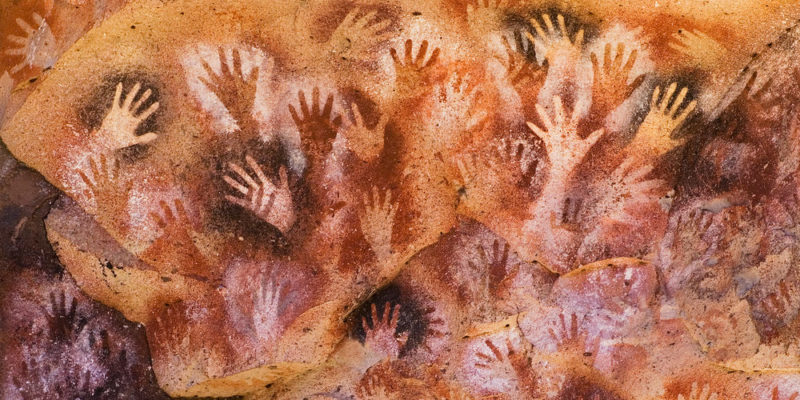 It is probable that the rock art was part of rituals.

It is difficult to know what role rock art played in primitive society . It is considered unlikely that they had a decorative function . On the contrary, the studies point to totemic functions, that is, of identification of the tribe and of contact with a guardian animal.

Another probable function is that they were part of rituals to try to win the favor of a deity or to attract good fortune in hunting. Their location in hard-to-reach places strengthens this hypothesis, since it suggests that they were in a sacred or mystical place.

It is estimated that these places were corners in which the tribe contemplated the history of their ancestors or left a trace of their passage on Earth .

The importance of these findings lies in what they reveal to us about the mentality of the primitive human being . It is striking that he was as inclined as we are to the representation of their customs, their anxieties and their desires.

Similar to what happened many centuries later (and continues to occur), it is highly probable that these representations had some magical-religious charge . They also offer us information about their customs, such as hunting bison, wild pig, etc. 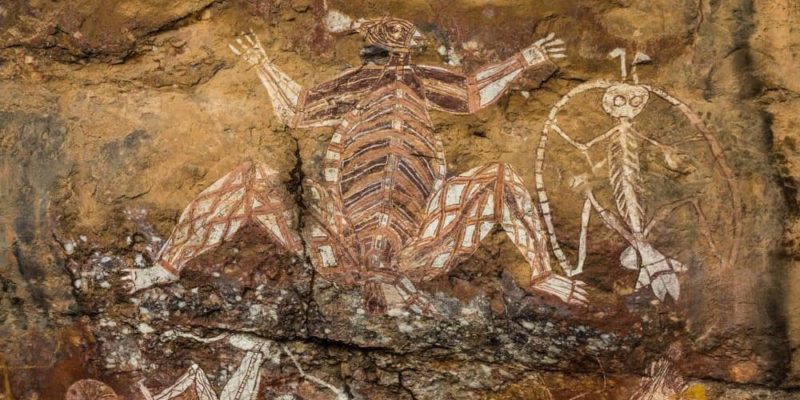 In Kakadu National Park there is a large collection of cave paintings.

The largest concentrations of rock art in the world are in:

In Latin America there are multiple deposits of rock art. Among the most important are: