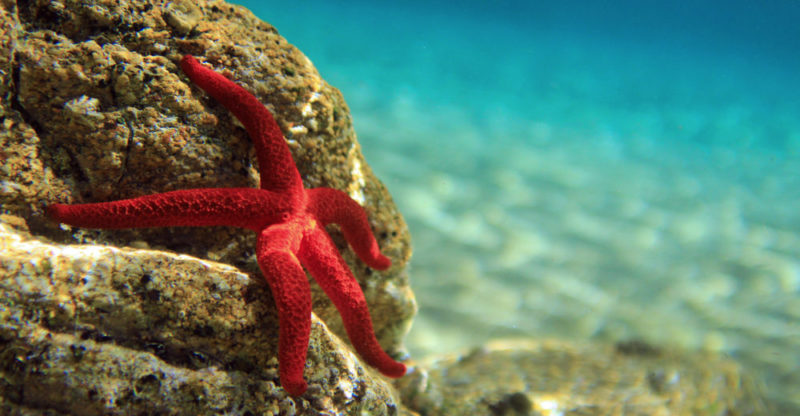 Where do starfish live?

What do starfish eat?

Parts of the starfish

How do starfish move?

How long do starfish live?

How do starfish breathe?

We explain what starfish are, what their habitat and food are like. Also, what are its characteristics and reproduction.

It is popularly known as starfish to a class (Asteroidea) of underwater living beings and invertebrates , belonging to the phylum of echinoderms (such as sea urchins), whose bodies are made up of five or more long arms attached to a central disk, thus giving them the appearance of a star .

Up to 1600 different species have been identified in this same class of animals , distributed throughout the world at different levels of ocean depth.

It is one of the most common and well-known inhabitants of the ocean floor , which usually appear in various sizes and colors.

In most human cultures they are considered attractive , harmless beings , which are a symbol of marine life and coastal areas.

Many species of starfish are at risk of extinction due to the destruction of their habitat , as a result of human activities in the oceans .

The presence of starfish in the fossil record, as well as other similar invertebrates , is not always easy to identify, since their soft parts do not fossilize well and their more rigid parts separate from the rest when the animal decomposes.

However, it is estimated that its evolutionary origin would be in the Ordovician period , in the Paleozoic Era , approximately 485 million years ago.

Its greatest stage of diversification as a species was between the Early Jurassic and the Middle Jurassic , after the mass extinction events during the Late Devonian and Late Permian , in which most of the species disappeared.

Where do starfish live?

Starfish can be found up to 6 kilometers deep.

Starfish inhabit ocean floors throughout the world , and are unable to survive in fresh waters . The greatest variety of species is found in the tropical region of the Indo-Pacific Ocean, and the five-armed species are the most predominant of all.

They can be observed up to depths of 6 kilometers below the surface.

What do starfish eat?

They are generally predators with little specific habits , capable of eating mollusks , clams, oysters, snails or any animal unable to evade their slow attack.

Many feed on detritus or decaying matter , such as dead or near-dead animals, sponges, plankton, or organic sheets attached to substrates.

Some species such as Acanthaster planci feed on coral polyps , thus posing a potential threat to the regrowth of weakened coral reefs.

Parts of the starfish 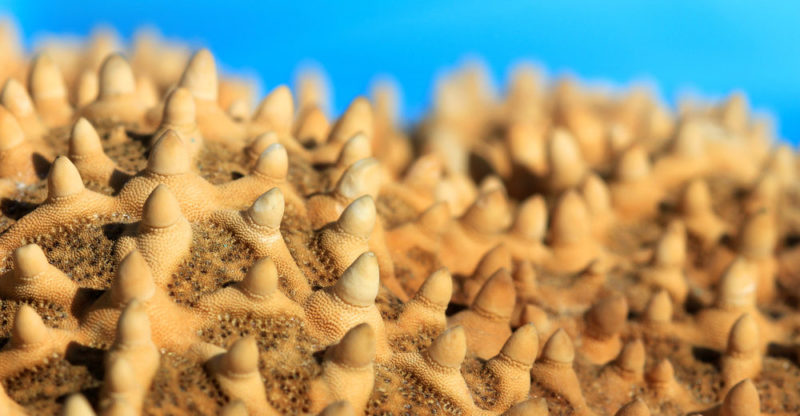 Starfish have a rigid crust of sheets of calcium carbonate.

The body of starfish is made up of two parts: a central disk, endowed with radial symmetry, where its organs and its mouth are ; and a set of hollow limbs, which can range in number between 5 and 40.

Both parts are covered with a rigid , more resistant crust of sheets of calcium carbonate, called ossicles, in which spines or granules can be found on the outside.

Underneath, they have tube feet , which are small appendages that perform locomotion and chemical transport functions.

The very body of the starfish is made up of diverse layers of tissue , with a thin epidermis and a thicker dermis, between which the circulatory system is located .

At the end of each limb, there is also an ocellus (simple eye) that allows detecting movement and variations between the presence and absence of light .

These animals lack a centralized brain and few sensory inputs, but are still sensitive to light, touch , temperature , orientation, and surrounding waters. 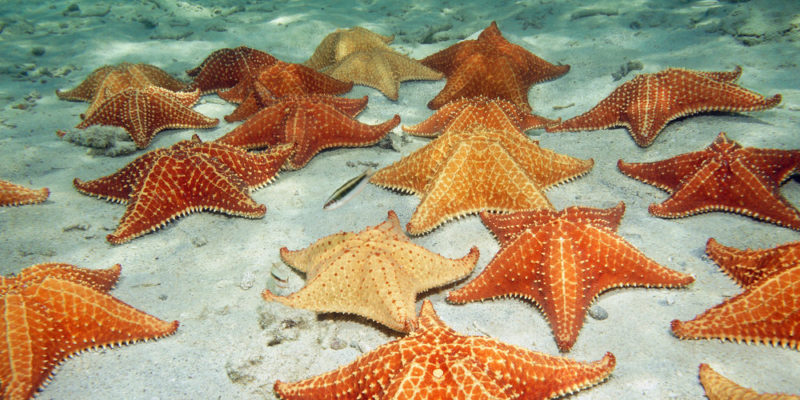 In starfish, the gametes are found between the arms.

Starfish can reproduce in two ways:

How do starfish move? 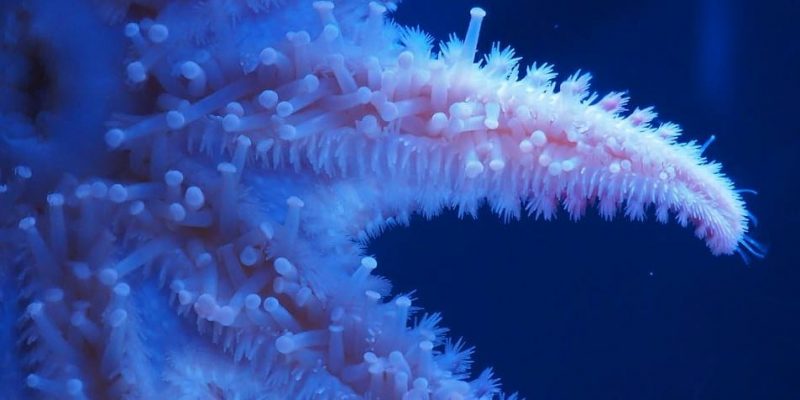 Starfish move slowly and imperceptibly , thanks to the set of appendages (feet) that cover the lower part of their bodies.

This works through an internal system of water circulation and the segregation of chemicals that transform the end of the foot into a kind of suction cup.

This is why stars can cling tightly to rocks or the surface of ships, even defying gravity in doing so.

How long do starfish live?

The life span of the starfish depends on the species. The larger ones tend to live longer than the smallest ones , being able to reach 10 years (and reach sexual maturity in 2) or even reaching 34 years of age.

How do starfish breathe? 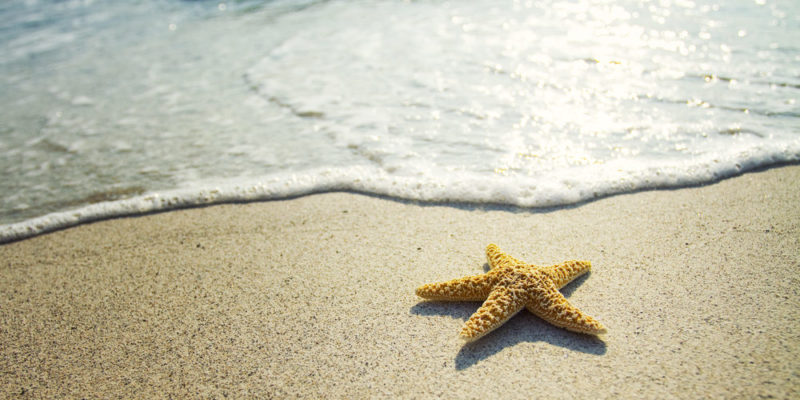 The lack of moisture in the air quickly dries out starfish.

These animals breathe through their tube feet , from which oxygen from the water is allowed to enter through the internal fluids of the body cavities.

Between one layer of tissue and the other, oxygen enters the animal . Out of the water, therefore, they cannot breathe and also the lack of humidity in the air dries them out quickly.

Many species of starfish are able to regenerate their lost tissues , for example from their limbs. And depending on the amount of surviving central disc, it is possible that such regeneration involves large portions of the total organism. 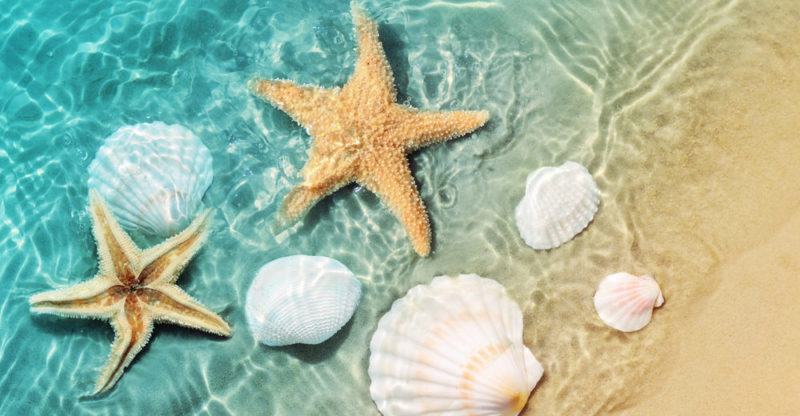 Starfish are very sensitive to toxins and chemicals in the water.

Although they are extremely abundant animals and are not particularly threatened with extinction, they are at the same time especially sensitive to the presence of toxins or chemicals in the water, as it is pumped in and out of their bodies.

For that reason, oil or chemical spills are terrible for them , as are, although it may not seem so, the brief moments in which tourists usually take them out of the water to photograph or see them up close, preventing them from carrying out their gas exchange , is say, drowning them.