Sulfuric Acid: What It Is, Properties, Uses And Characteristics 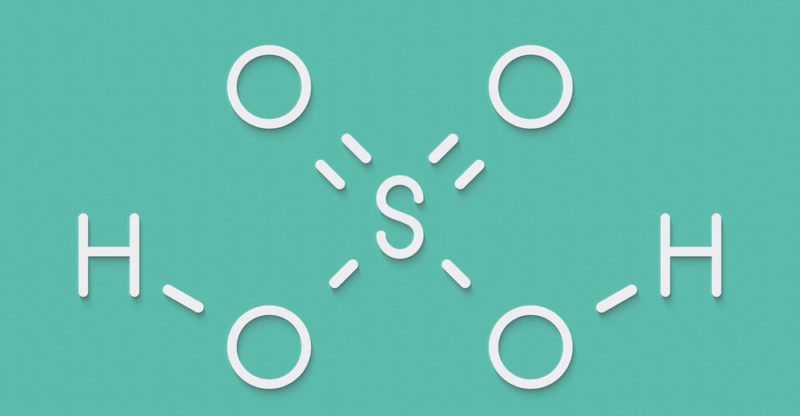 What is sulfuric acid?

How is sulfuric acid obtained?

What is sulfuric acid used for?

We explain what sulfuric acid is, what its formula is like and the properties it has. Also, what are its characteristics and uses.

What is sulfuric acid?

Sulfuric acid is a highly corrosive chemical compound . It is one of the most widely generated and used chemical products in the world, given its many applications in industry and in the synthesis of other chemical inputs.

It is known as tetraoxosulfuric acid (VI) or hydrogen tetraoxosulfate (VI). And it is made up of one atom of sulfur , two of hydrogen and four of oxygen . It is represented by the molecular formula H 2 SO 4 . 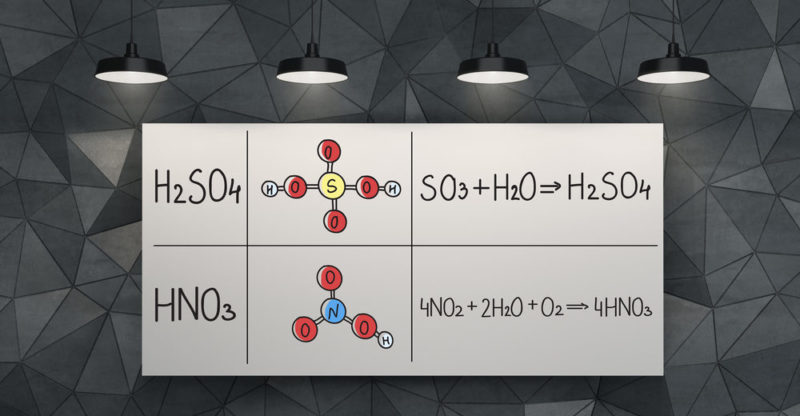 The H 2 SO 4 began to be manufactured formally in the 18th century.

Sulfuric acid was first observed in the Muslim Middle Ages, when alchemists obtained it from crystals of sulfate salts , a material known as vitriol, from the Latin vitreus (“crystal”). For this reason, traditionally sulfuric acid was called oil of vitriol, liquor of vitriol or spirit of vitriol.

According to this tradition, vitriol was supposed to be the most important chemical in the world , so it could be used as a philosopher’s stone (a substance that was supposed to be able to convert metals into gold or silver ). For this reason, various substances were called blue or Roman vitriol ( copper sulfate II, CuSO 4 ), white vitriol ( zinc sulfate , ZnSO 4 ), green vitriol ( iron sulfate II, FeSO 4 ), red vitriol (sulfate of cobalt II, CoSO 4 ) and vitriol from Mars (iron sulfate III, Fe 2 (SO 4 ) 3 ).

The first obtaining of sulfuric acid in the modern world took place in the seventeenth century. The German Johann Glauber obtained it by burning sulfur with potassium nitrate (KNO 3 ). Its formally recognized manufacture took place in the 18th century in England , using a method known as “lead chambers”.

This method consisted of washing the hot gaseous sulfur dioxide (SO 2 ) into various nitrogenous compounds. It was then dissolved in an acid bath to form tower acid or Glover’s acid.

The latter, then, passed into a series of lead chambers in which it was washed with water , later boiled and condensed on the walls. It was, however, a very low concentration acid compared to other current methods. 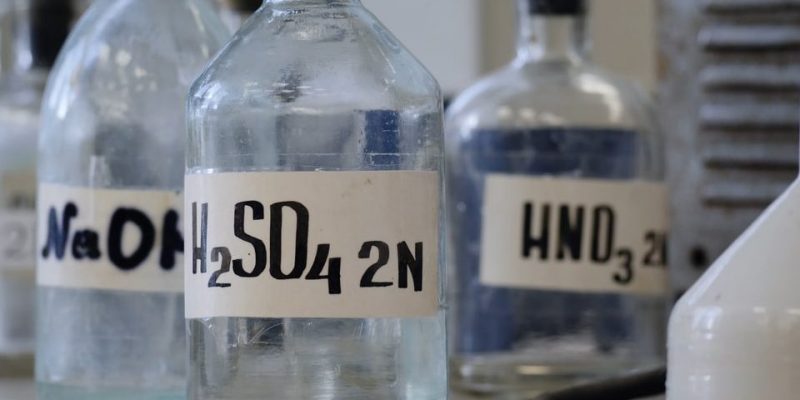 Sulfuric acid is soluble in water, but generates heat.

The sulfuric acid molecule has a pyramidal structure , with the sulfur atom in the center and the four oxygen atoms attached to it, located at four vertices. Two of the oxygen atoms are linked to sulfur by double bonds, while the other two by simple bonds. In two of them the two hydrogen atoms are also united. 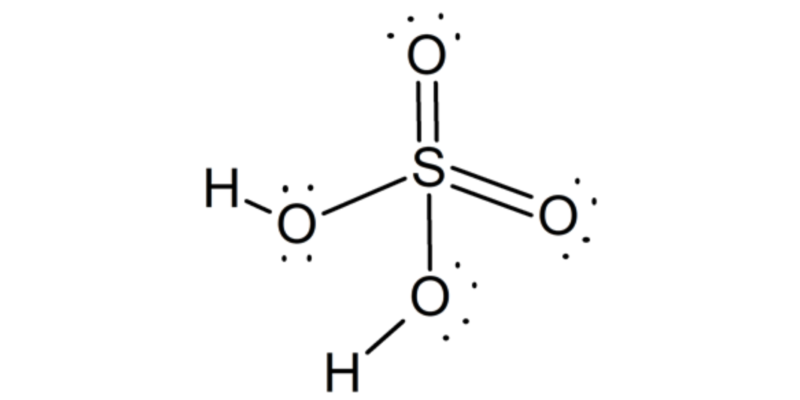 How is sulfuric acid obtained? 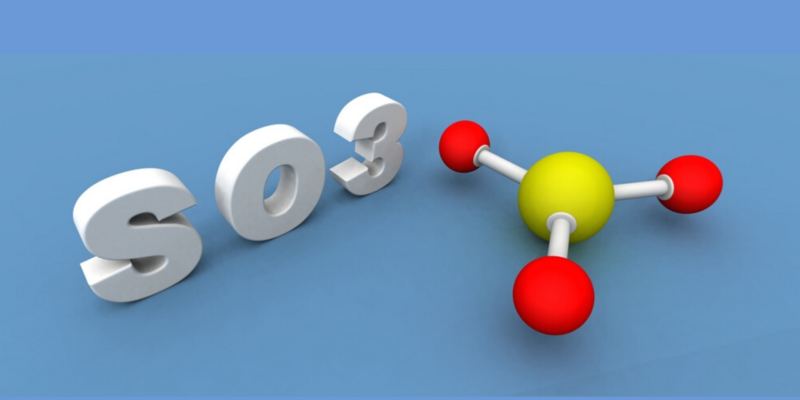 Sulfur trioxide should not be diluted directly with water.

Commonly, the obtaining of sulfuric acid is carried out from the following methods :

First, sulfur dioxide (SO 2 ) is obtained through the combustion of sulfur with oxygen or by roasting minerals such as pyrite. Then, the sulfur dioxide is oxidized to obtain sulfur trioxide (SO 3 ).

Then, the sulfur trioxide is passed through cooling mechanisms and then through an absorption tower, where it is reacted with a sample of concentrated sulfuric acid, which results in pyrosulfuric acid (H 2 S 2 O 7 ).

This acid is then decomposed by reacting with water , resulting in twice the amount of sulfuric acid. This chain of reactions is described as follows:

Note that it is not advisable to dilute sulfur trioxide directly in water , since it generates an exothermic reaction so violent that most of the compound volatilizes before the formation of sulfuric acid can occur.

The sulfuric acid used to make fertilizers is produced mainly by this method.

In this process, sulfur dioxide enters at high temperatures through the lower part of a Glover tower (a type of chemical reactor), where it is washed with a solution of nitrogen monoxide (NO) and nitrogen dioxide (NO 2 ). in sulfuric acid. During this process, a part of the sulfur dioxide is oxidized to sulfur trioxide, which is washed with acid to form Glover’s acid, an acid that forms in the tower and is composed of 78% H 2 SO 4 .

The mixture is then passed into a lead chamber , where it is treated with water and sulfuric acid is condensed on the chamber walls.

What is sulfuric acid used for? 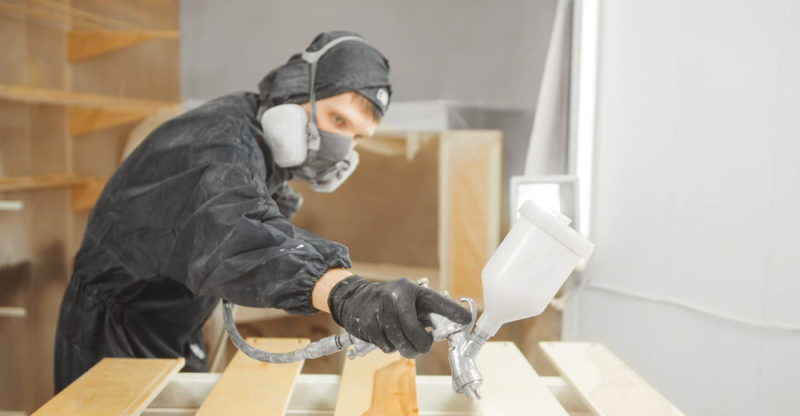 Sulfuric acid is very important in the wood industry.

Sulfuric acid applications are primarily in the chemical and petrochemical industry , as part of obtaining other acids and bases. It is particularly important in the fertilizer industry, as well as in petroleum refining , steel treatment , the manufacture of explosives, detergents, and plastics .

Its importance in the wood and paper industry is also known . It is also involved in many processes in the textile industry and in the production of batteries. In many countries its commercialization is given under strict surveillance since it is part of the chemicals commonly used in the manufacture of cocaine. 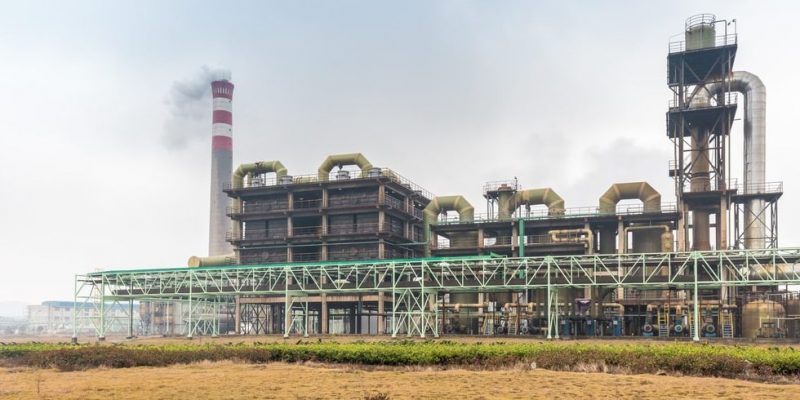 It is clear that sulfuric acid is a toxic compound: a major irritant , capable of rapidly corroding organic matter, when in high concentrations.

Even in low concentrations, repeated exposures can cause dermatitis or even cancer. There are no safe levels of inhalation, ingestion, or contact exposure to this compound.

Sulfuric acid is the most widely manufactured chemical in the world , and its sales across the globe are substantial. So much so, that at a certain point their production margins were used as a method of measuring the degree of industrialization of the countries.

The price per kilogram can range from tens to hundreds of US dollars, depending on its concentration.

Sulfuric acid is not usually found in nature , much less in high concentrations. Therefore, it constitutes a polluting compound with a great impact on animal and plant life , especially when considering its explosive reaction with water.

Material spills are usually treated with a strong base (such as baking soda) and contained by cement ash or other resistant materials . Never try to dilute it with water , nor should it be flushed down the drain or sewer.