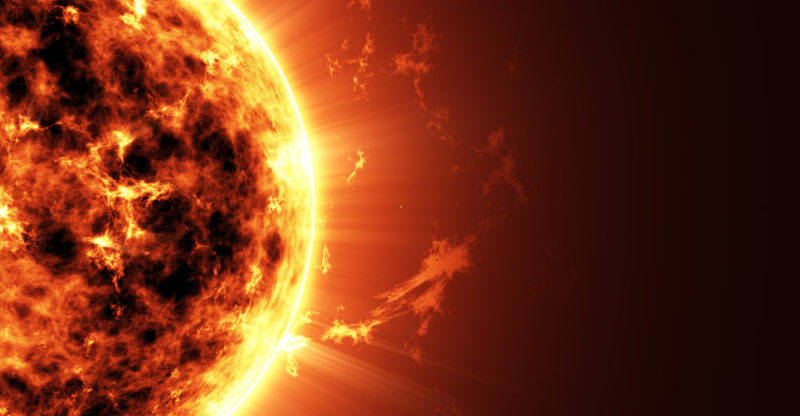 What is the Sun?

How did the Sun originate?

How is the Sun composed?

Structure of the Sun

Why is the Sun important?

When will his death occur?

We explain everything about the Sun, its origin, composition and what its structure is like. Also, what are its characteristics and importance.

What is the Sun?

We call Sun to the star closest to our planet (149.6 million kilometers). All the planets in the Solar System orbit around it , attracted by their gravity , as well as the comets and asteroids that accompany them.

The Sun is a fairly common star in our galaxy, that is, it does not stand out for being much larger or much smaller than others.

It is a G2-type yellow dwarf star , which passes through its main sequence of life. It is located in the outer region of the Milky Way , in one of its spiral arms, about 26,000 light years from its center.

Its size is such that it represents 99% of the mass of the solar system , which is equivalent to 743 times the total mass of each and every one of its planets combined (about 330,000 times the earth’s mass).

On the other hand, the Sun has a diameter of 1.4 million kilometers , which makes it the largest and brightest object in the Earth’s sky, to the point of distinguishing with its presence between day and night.

Thanks to its constant emission of electromagnetic radiation (including perceptible light) our planet receives heat and illumination , making the development of life possible .

How did the Sun originate?

The Sun was formed, like all stars , from gas and other materials that were part of a large molecular cloud.

That cloud collapsed by its own gravitational forces 4.6 billion years ago. From that same cloud comes the entire Solar System.

Eventually, the gaseous mass became so dense that it triggered nuclear reactions that “ignited” the core of the star . This is the most common process of formation of these celestial stars.

How is the Sun composed? 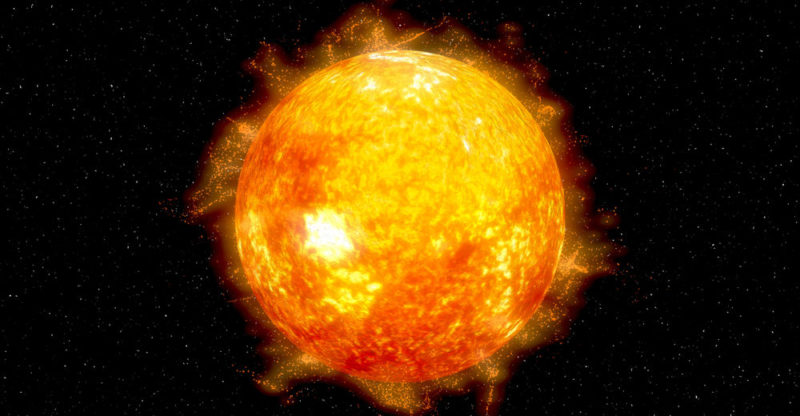 As the hydrogen in the Sun is consumed, it is converted into helium.

The Sun is an immense ball of plasma , almost totally round, composed mainly of hydrogen (74.9%) and helium (23.8%). In addition, it contains a tiny portion in comparison (2%) of elements such as oxygen , carbon , neon and iron .

Hydrogen is the combustible material of the Sun , and as it is consumed it turns into helium, leaving a layer of “helium ash”. This layer will increase as the star completes its main life cycle.

Structure of the Sun 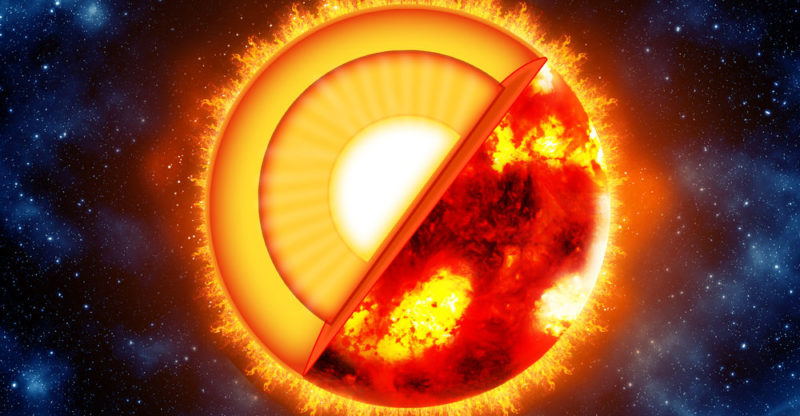 The nucleus occupies a fifth of the structure of the Sun.

The Sun is spherical , with a slight flattening at the poles due to its rotational motion.

Its physical (hydrostatic) balance is due to the internal cancellation of the gigantic force of gravity that its mass gives it, and the thrust of the internal explosion. This explosion is produced by the nuclear reactions of the massive fusion of hydrogen.

The Sun is structured in layers, like an onion. These layers are:

The temperature of the Sun varies according to the region , being extremely high in all. 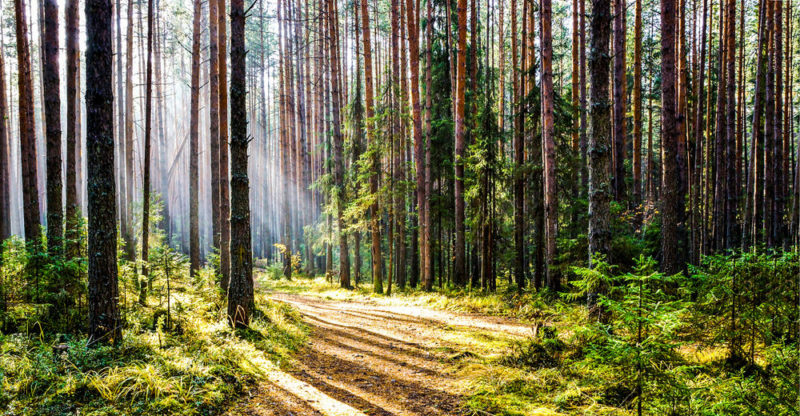 Sunlight is attenuated by the planet’s atmosphere.

The Sun emits enormous amounts of electromagnetic radiation , some of which can be seen as sunlight. The amount of energy in this light oscillates around 1368 W / m 2 , at a distance of one astronomical unit (AU), that is, the distance from the Earth to the Sun.

This amount of energy is attenuated by the planet’s atmosphere , allowing the passage of about 1000 W / m 2 in a bright noon. Sunlight is made up of 50% infrared light, 40% visible spectrum, and 10% ultraviolet light. 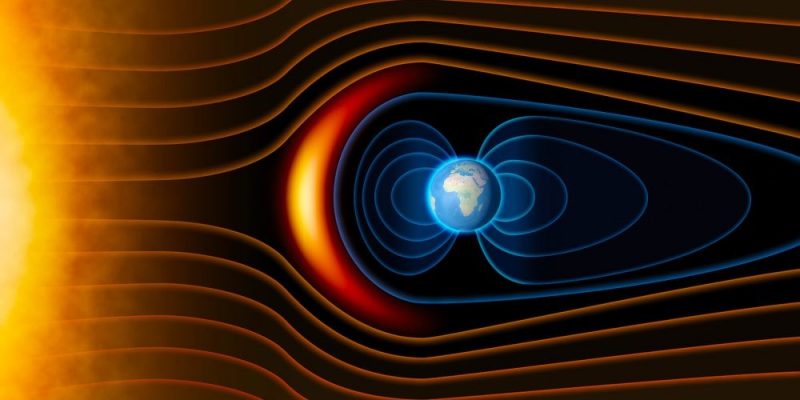 The solar wind creates a magnetic field that covers the entire Solar System.

A stream of charged particles released by the Sun’s corona is called a solar wind . It is made up of electrons, protons, and alpha particles. It oscillates in density, temperature and speed depending on the region of the star.

These particles have so much energy that they can escape the gravity of the star , thus creating the heliosphere: a magnetic bubble that extends throughout the Solar System to Pluto .

A solar flare or solar flare is a sudden and intense variation of the surface of the Sun , due to an explosion of its hot gases.

These explosions take place in its most active regions , releasing large amounts of magnetic radiation, particles and other forms of mass, at various frequencies and intensities. They can occur multiple times in a day or over the course of a week. They generate large amounts of X-rays and Gamma rays.

Why is the Sun important? 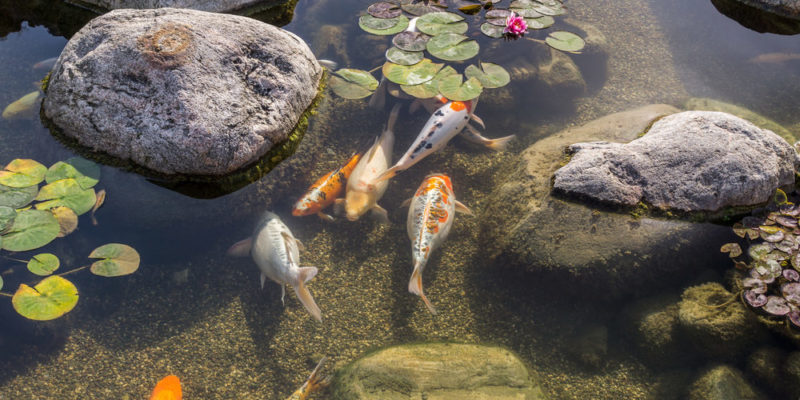 The heat from the Sun allows the water to remain in a liquid state.

The Sun is irreplaceable for us . Its light allows plant photosynthesis, without which life as we know it would be impossible, since oxygen would be depleted after the death of all plants .

On the other hand, its heat keeps the climate stable , allows the water to remain in a liquid state and gives energy to many of the necessary climatic cycles.

Furthermore, the Sun’s gravity is what keeps the planets orbiting around it, so that without it there would be no day and night , and no seasons. Without these phenomena, Earth would be a cold, dead planet, or it might not even have formed in the first place.

In culture this importance is reflected: the Sun occupies the central place, of the fecunding father god , in practically all known mythologies . All the great gods, kings or messiahs have been in one way or another associated with its splendor.

In an effort to understand it better, humans have launched several space probes such as the US missions Pioneer 5 to 9 (and Pioneer E), which were established in the orbit of planet Earth to observe the Sun from there.

In addition, the German-American Helios A and B probes were sent . However, the first to fly over the Sun did so in 1990, and they were the US Ulysses probes.

When will his death occur? 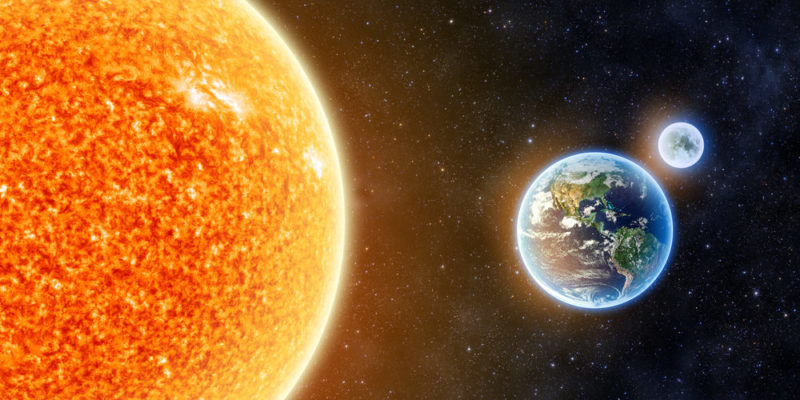 The Sun lives in its middle age and has not varied much for almost four billion years . However, it is already known that the Sun will die.

It will occur in several stages, the first being the depletion of hydrogen in its nucleus . This will change the nature of the nuclear fusion reactions within it.

As a consequence, within 5,000 to 6,000 million years , it will, after a long process, become a red giant. It will likely engulf the orbits of Mercury , Venus, and possibly Earth.

After expelling its outer layers into space, the core of the Sun will remain turned into a white dwarf , much smaller in dimensions. Gradually, it will cool down until it turns off.