Taj Mahal Mausoleum: What Is It, Location, Architecture And Characteristics 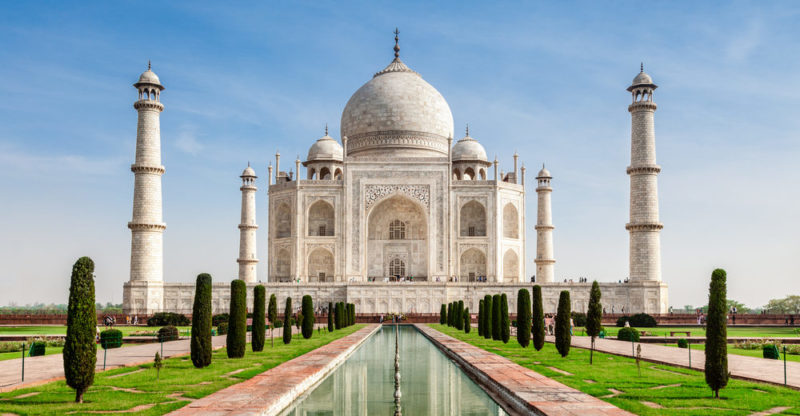 What is the Taj Mahal Mausoleum?

History of the Taj Mahal Mausoleum

Structure of the Taj Mahal Mausoleum

Construction of the Taj Mahal Mausoleum

Other legends about the Taj Mahal Mausoleum

Threats of the Taj Mahal Mausoleum

Importance of the Taj Mahal Mausoleum

We explain what the Taj Mahal is, where it is located and the history of its construction. Also, what are its characteristics and legends.

What is the Taj Mahal Mausoleum?

The Taj Mahal is a funerary monument in the city of Agra, India . Its name in Hindi which means “crown of palaces”. It was erected between 1631 and 1654 during the rule of Emperor Shah Jahan of the Mughal dynasty.

This huge palace is considered one of the most beautiful examples of architecture in the region , a confluence of aesthetics and different cultures . In its entirety, the set of walled buildings occupy an area of 17 hectares and includes a gigantic mosque.

The Taj Mahal is one of the wonders of the world. In addition, it is a major tourist destination of India , receiving annually the visit of between 7 and 8 million visitors. 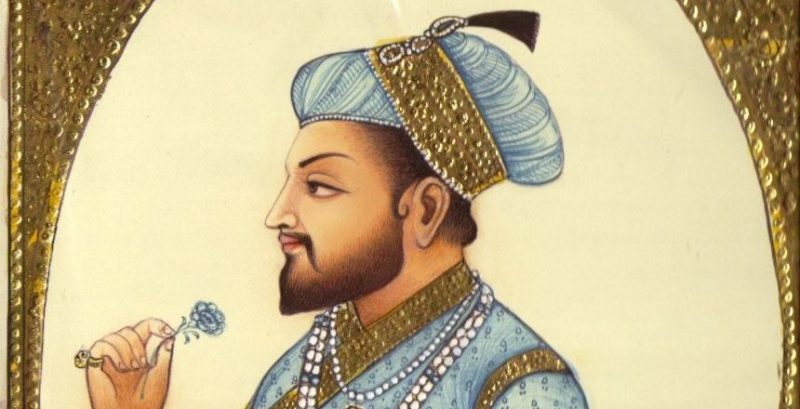 The Muslim emperor Shah Jahan was the one who ordered the construction of the Taj Mahal.

This wonder of the world was commissioned to the court architect Ustad Ahmad Lahori .

The Muslim emperor Shah Jahan (1592-1666) had it built to pay homage to his fourth wife and favorite, Arjumand Banu Begum, better known as Mamtaz Mahal, who died giving birth to the monarch’s fourteenth daughter.

History of the Taj Mahal Mausoleum 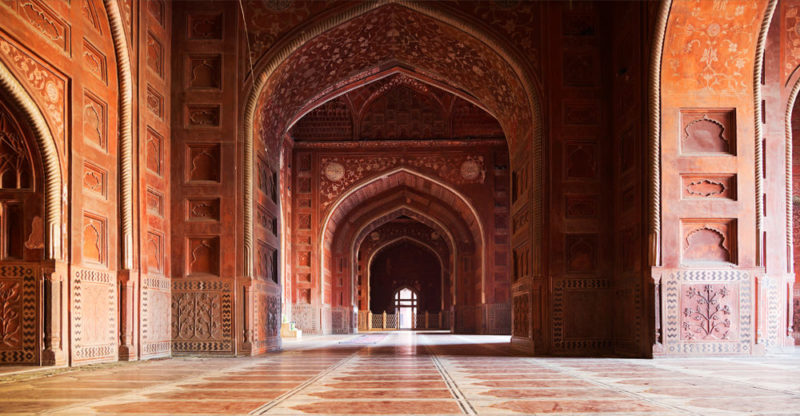 The Taj Mahal was only completed in 1656.

Shah Jahan ordered the construction of the Taj Mahal in 1632, as an offering to his wife, who had just passed away . Even before this work, the emperor was an important patron for various art forms .

He devoted enormous resources to the beautification of India, especially its capital, located in the city of Agra (later moved to Delhi). For example, in honor of Mamtaz Mahal he also ordered the design and construction of the Shalimar gardens in Lahore.

The work was only finished in 1656 . The emperor was already very ill and his two sons, Sha Shuja and Aurangzeb (Abu Muzaffar Muhiuddin Muhammad Aurangzeb Alamgir) were rising to claim their own empires.

Deposed from his rule, the former monarch was allowed to live under house arrest for the remaining 10 years of his life, which, it is said, he spent looking out the window at the mausoleum of his beloved wife. When he died, he was buried with her inside the Taj Mahal .

At the end of the 19th century, when India was dominated by the British Empire , the Taj Mahal was in very poor condition and various sections of the building threatened to collapse. Many of the precious jewels on its walls and many of its structures had been stolen or damaged during the sepoy rebellion in 1857.

Its restoration began in 1908 , by order of the British Viceroy Lord Curzon. He also ordered the construction of the great lamp in the inner chamber, modeled after a mosque in Cairo, and the remodeling of its gardens following the English design.

Thanks to protective measures taken during the 20th century , the Taj Mahal survived World War II and the Pakistani-Indian wars of 1965 and 1971. 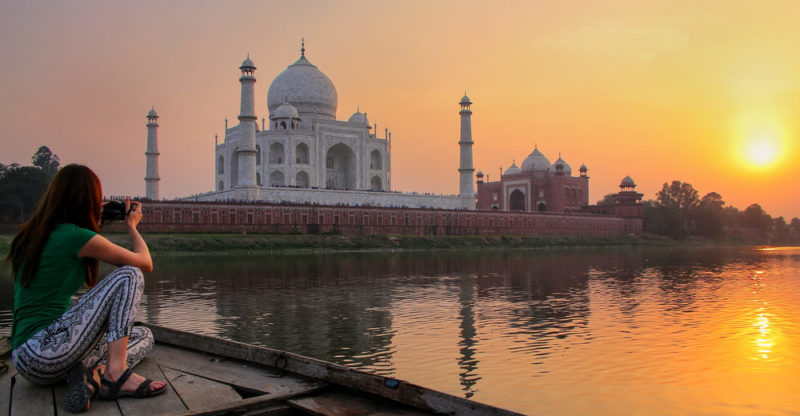 The Taj Mahal is located on the banks of the Yamuna River.

The Taj Mahal is located in the city of Agra, in the Indian province of Uttar Pradesh in the north of the country, and on the banks of the Yamuna River, one of the longest and largest tributaries of the famous Ganges River . This city is one of the most populated in the state and the country, and was the capital of the Mughal Empire between 1556 and 1658.

The design of the Taj Mahal did not correspond to a single person, but involved construction architects of diverse origins. Among them are:

As a consequence of such a diversity of talents, the Taj Mahal uniquely combines elements typical of various Islamic , Persian (Iranian), Indian and Ottoman (Turkish) architectural, sculptural and aesthetic traditions .

Structure of the Taj Mahal Mausoleum 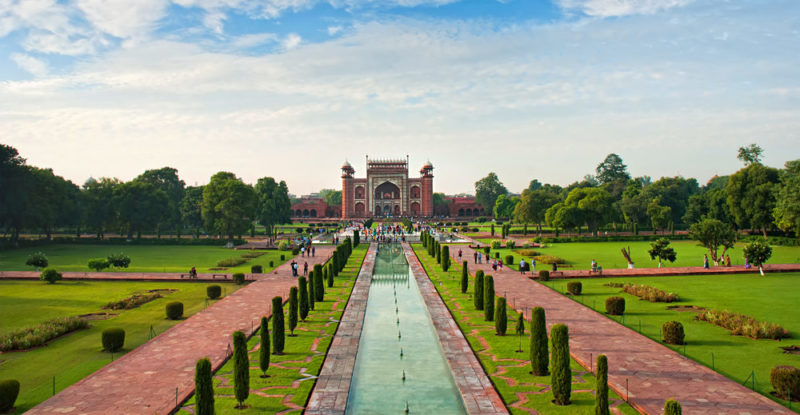 The interior gardens were designed to represent the Garden of Eden.

A plan of the Taj Mahal shows its various parts in perfect symmetry, incorporating the river itself into the majestically decorated areas of the monument. We can then talk about:

Construction of the Taj Mahal Mausoleum 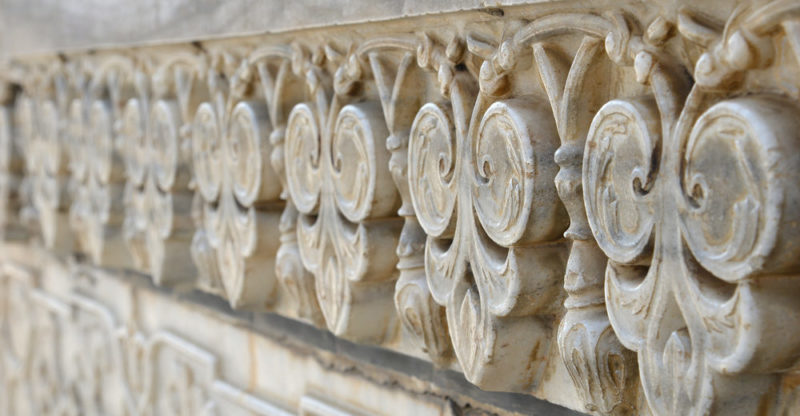 The marble from the Taj Mahal was carried by a 15km long ramp.

The construction of the Taj Mahal involved the efforts of some 20,000 workers , and consisted of continuous work during several stages. First, the excavation of the foundations required the filling of 12,000 m2 with rubble to reduce the seepage of the river and the uplift of the surface to about fifteen meters above the level of the bank.

The traditional bamboo scaffolding of the time was replaced by brick, outside and inside the walls of the mausoleum. Building and disassembling them took a significant portion of the total construction time. The marble was carried along a 15km long ramp , in carts pulled by thirty or forty oxen.

The mausoleum was built starting with the pedestal or base , then the building with its dome, then the four minarets, then the mosque and the jawab, and finally the access fort. Just building the first two parts took twelve years of work, and the rest of the complex ten more years.

The legend that the initial draft of the monument included the building of a second mausoleum on the opposite bank of the river, identical proportions but made marble black, called the black Taj. However, the monarch was dethroned by his sons before completing it, leaving only the bases on the other side of the river.

This version has been denied, and it has been shown that the alleged bases of the black Taj are actually part of the Garden of Moonlight , equipped with an octagonal pool in which the image of the dome could be reflected, thus preserving the symmetry that inspired the project. Black marble has not been found anywhere nearby.

Other legends about the Taj Mahal Mausoleum 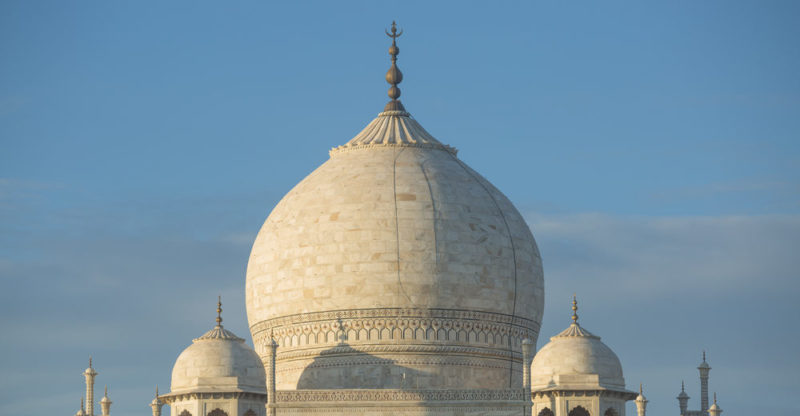 The original monument included a set of gold leaves covering the dome.

Many things are told about the Taj Mahal, most of them simple legends or rumors. Some examples are:

Threats of the Taj Mahal Mausoleum 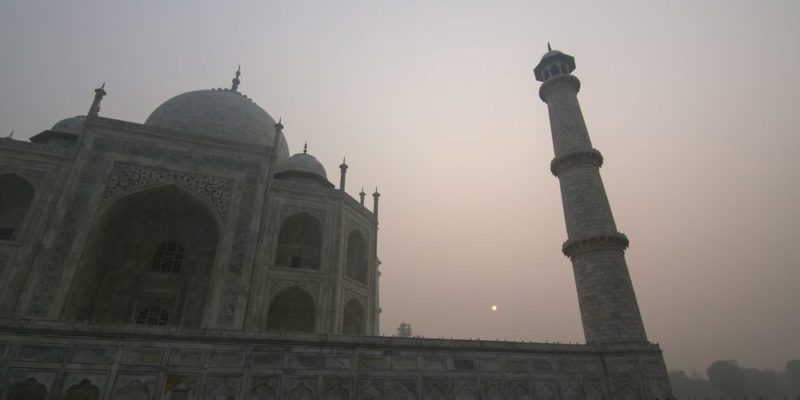 As curious as it may sound, the great contemporary threats to this architectural marvel come not from wars or large-scale catastrophes, but from the slow action of human industry .

The pollution in the region by, among others, the Mathura refinery, have brought one acid rain which seriously impairs the facilities of the Taj Mahal. It causes cracks and darkening of the marble, which in turn has affected the foundations of the building and its marvelous dome.

In addition, certain political and bureaucratic disputes regarding the ownership (Hindi or Muslim) of the building, make it more difficult to undertake the preservation and repair work that would be necessary to restore it to its former splendor.

Importance of the Taj Mahal Mausoleum

The Bengali poet Rabindranath Tagore described the Taj Mahal as “a tear on the cheek of time,” due to its unique architecture and the narrative that accompanies its construction. It was declared a World Heritage Site by UNESCO in 1983 . In addition, in 2007 it was elected as one of the New Seven Wonders of the Modern World.