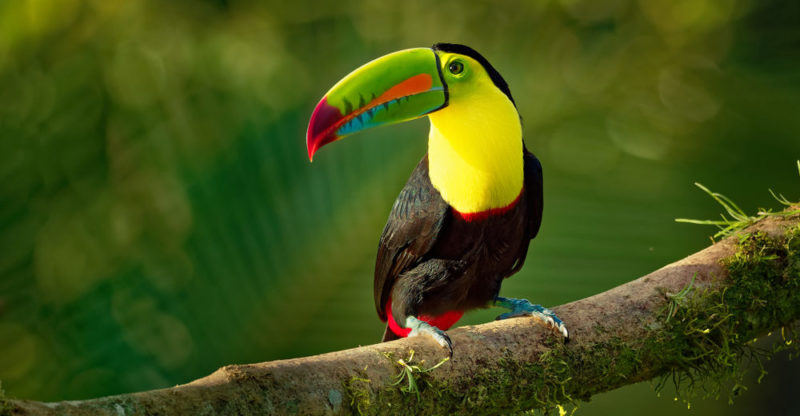 What is a toucan?

displacement of the toucan

Evolution of the toucan

We explain everything about the toucan, the types that exist and how they reproduce. In addition, what are its characteristics and feeding.

What is a toucan?

A family of birds is known as toucan, diotedé or diostedé . It is an extremely large family, which houses six genera and forty-two different species, all characterized by very long and voluminous beaks, and bright colors.

They are scientifically known as the ranfastids ( Ramphastidae ). Its common name, toucan, comes from the Tupi Guaraní word “ tucana ” . With its colorful plumage, it is a characteristic animal of the exuberant American fauna and is the national bird of Belize.

Toucans on average measure between 18 and 65 cm, weigh between 130 and 680 grams , and live about 20 years (18 in captivity). They are a monogamous species, holding the same partner for their entire lives. They do not have a melodious song, but a monotonous and at times unpleasant croak.

Toucans are American birds , widely distributed from Mexico to Argentina .

They normally prefer low altitude tropical rain forests , although there are also species adapted to temperate forests at 3000 meters above sea level.

Their nests are usually in holes inside trees. It is a sedentary species , inhabiting the same region all its life. 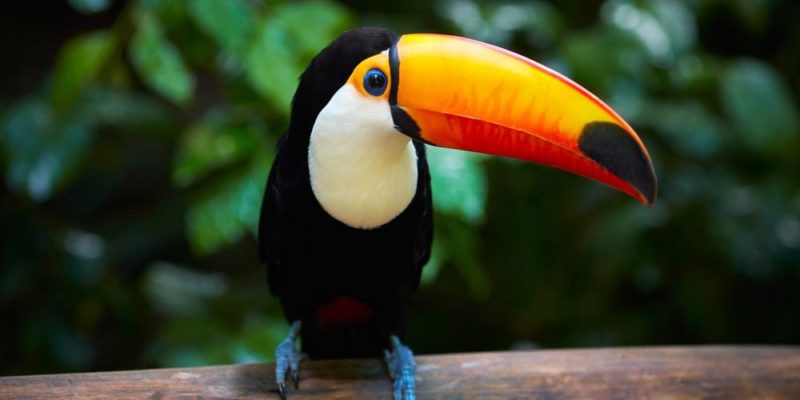 The “true toucans” are characterized by their large beak and square tail.

Scholars of these birds generally classify them into two large groups:

The courtship of the toucans is very striking: the female and the male share food or sticks , with their bulky beaks. Their nests are usually in holes inside trees, and once fertilized, the female lays two to four white, oval, porous eggs in a single annual clutch.

The incubation of the eggs lasts between 17 and 20 days , after which the hatchlings come out devoid of plumage and with their eyes closed. After eight to nine weeks, they leave the nest to provide themselves with food and at three or four years they are sexually mature, ready to repeat the cycle. 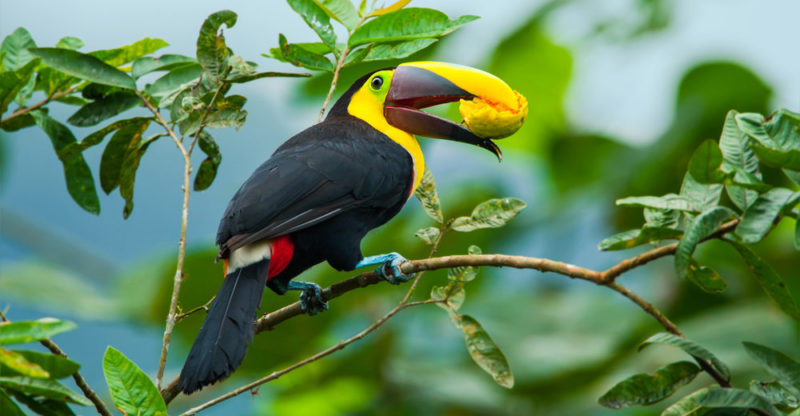 To swallow, the toucan jerks its neck due to its huge beak.

Toucans feed mostly on berries, seeds and ripe fruit , as they spend most of their lives in trees. However, they can also eat insects , small lizards, and even nestlings and the eggs of other birds .

They have a very small stomach. In captivity it is usual to feed them with caterpillars , insects or ground meat. To swallow they make a sudden movement with their neck, given the large size of their beaks.

Toucans are very social birds . They usually walk in pairs or in small groups that can reach a dozen. They generally stay on the branches of trees.

In some places they are considered talkative birds , similar to parrots, but in reality they are not capable of repeating too many sounds . Its squawk can sometimes resemble a human voice .

They can be tamed, although they never lose their fierce and territorial nature , which requires keeping them in separate cages. The best thing, in any case, is to observe them in their natural habitat. 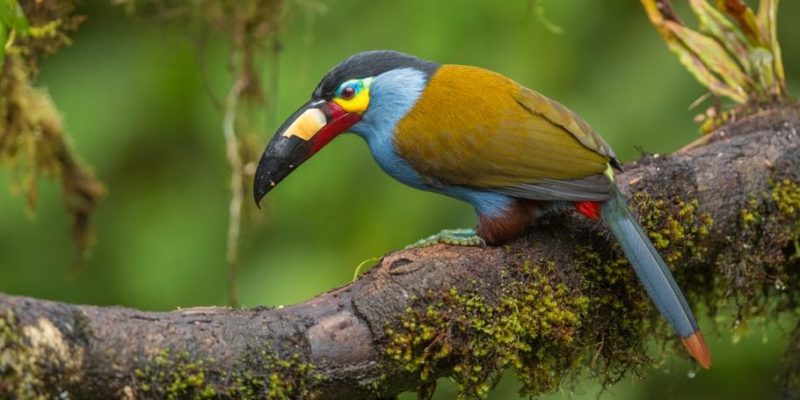 Some species of toucan have beaks and feathers of various colors.

The traditional toucan or toco toucan almost always has a body of well-differentiated black and white feathers , with a yellow and orange beak, at the end of which there is a black spot.

Other species have beaks with various colored spots , or they have a much more varied plumage, including shades of blue, yellow and green.

displacement of the toucan

Toucans do not fly for long periods of time . This may be due to the weight of their beak or because they simply do not have the need to do so, as they are not migratory birds.

Evolution of the toucan 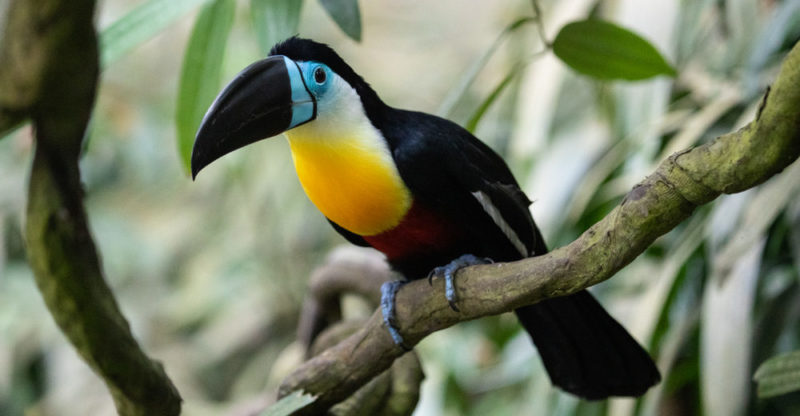 The bill of the toucan reaches up to a third of its body.

Toucans are part of the endogenous American species that emerged from centuries of isolated evolution , once the continent moved away from the Euro-African mass until it reached its current position.

Within the world of birds, they are part of the order of the piciformes, seven families of birds with peculiar beaks . In this order are also the woodpeckers or bearded birds which, unlike the toucan, are found in Asia and Africa .

Its beak, the most striking physiological characteristic, reaches up to a third of its body . Not only does it serve as a tool for feeding , but it also provides an excellent cooling surface, which dissipates body heat and allows the animal to be kept cool in the high temperatures of the humid tropical forest.

The toucan is considered in danger of extinction , due to the confluence of different factors such as predation, hunting to make ornaments with its colorful feathers and beak. In addition, it is affected by the serious deforestation problem facing the Amazon.

Their threats also include biopiracy and captivity . For this reason, in many American countries today it is considered a crime to trade with these birds or to keep them in any type of captivity. 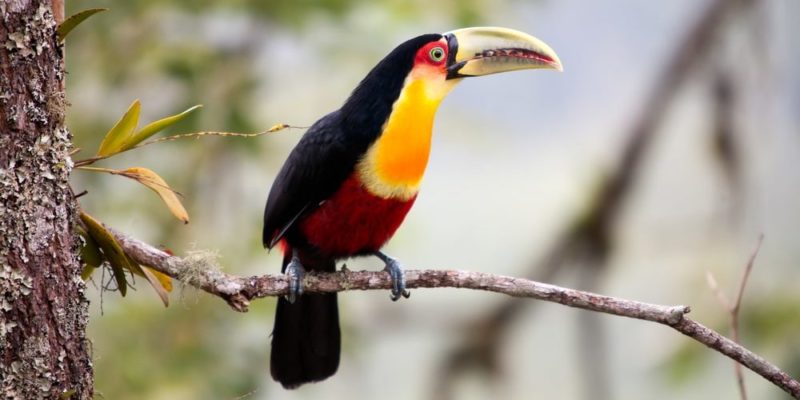 The bicolored toucan is found in Bolivia, Paraguay, Brazil and Argentina.

The main species of toucan are: