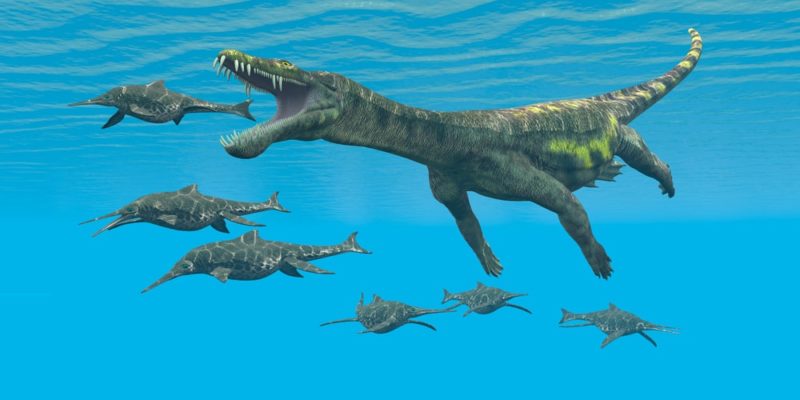 What was the Triassic Period?

Geological features of the Triassic

We explain what the Triassic Period was, how it is divided and the climate it presents. Also, what are its characteristics, flora and fauna.

What was the Triassic Period?

The Triassic Period is the initial period of the Mesozoic era on the geological time scale (which began 252.2 million years ago and ended 66 million years ago). Together with the later Jurassic and Cretaceous periods , they constitute the reign of the dinosaurs on Earth .

The Triassic Period lasted from 251 million years ago to approximately 201 million years ago, a period that begins and ends with two mass extinction events of species : the Permian-Triassic and the Triassic-Jurassic. This allows a more precise setting of its time limits.

Its name comes from the three rock strata in which the German paleontologist Friedrich August von Alberti identified the first fossil finds of that period, in central Germany , in 1834. The Triassic is the first geological period in which fossils of dinosaurs .

The Permian Period is the last of the Paleozoic Era , prior to the Mesozoic. It is temporarily located between 299 and 251 million years ago.

At this time the world consisted of two large continents , Siberia and Pangea , surrounded by a global ocean called Panthalassa.

The Permian culminated in the largest known extinction in the history of life on the planet, the Permian-Triassic mass extinction. 70% of terrestrial species were eliminated and 90% of marine species. Also at its end, Pangea, a “C”-shaped macrocontinent, was formed. 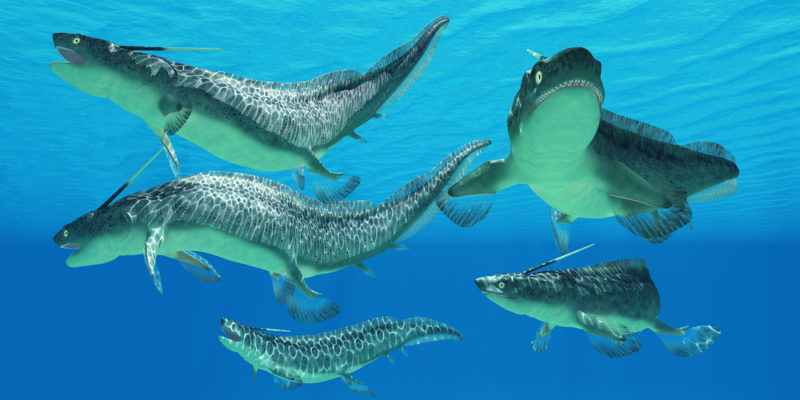 The Upper Triassic begins about 247.2 million years ago.

The Triassic is divided into three Epochs or Series, comprising seven Ages or Floors throughout its 50 million years:

Geological features of the Triassic

At the beginning of the Triassic, the two continents known in previous times were unified into one, in the shape of a “C”, known as Pangea.

In the central hole was the Tethys Sea . It separated its two great continental portions, known as Laurasia ( North America , Europe , and Asia ) and Gondwana ( South America , Africa , Arabia, India , and Antarctica).

In the late Triassic, Pangea showed its first signs of separation , as gaps between North America, Eurasia, and Africa emerged. Sea level began a slow rise that culminated at the end of the Mesozoic Era. However, it still did not significantly reduce the portion of the planet’s surface above water. 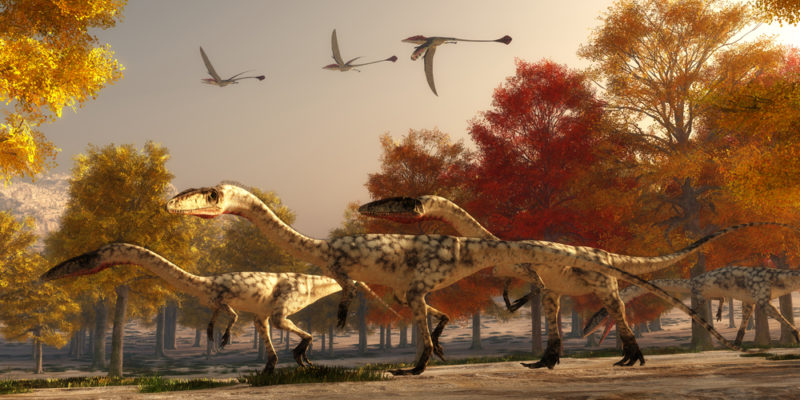 Pangea’s enormous size made it difficult to cool the oceans.

The world’s climate in the Triassic was hot and dry . The summers were very intense and the winters very cold, especially in the equatorial region, which probably received water from strong monsoons annually.

However, the enormous size of Pangea made it difficult to cool the oceans, producing deserts and evaporites in its interior. There is no evidence of a glacial presence at the poles of the time, but of a temperate climate suitable for reptiles .

Since land plants did not suffer like other species during the end-Permian extinction, they did not show very significant evolutionary changes during the Triassic.

Broadly speaking, it can be classified according to its place in location.

In Argentina there are petrified trees that come from the Triassic.

Petrified forests are archaeological sites of fossilized trees . For a tree to petrify, all its organic matter had to be gradually replaced by minerals. Many Triassic trees today are found in petrified forests.

An example are those that abound in the Paramillos de Upsallata, in Mendoza, Argentina . This Middle Triassic petrified forest is in a life position, and is made up of more than 120 fossil logs from a subtropical evergreen forest. It was discovered on his world tour by Charles Darwin in 1835. 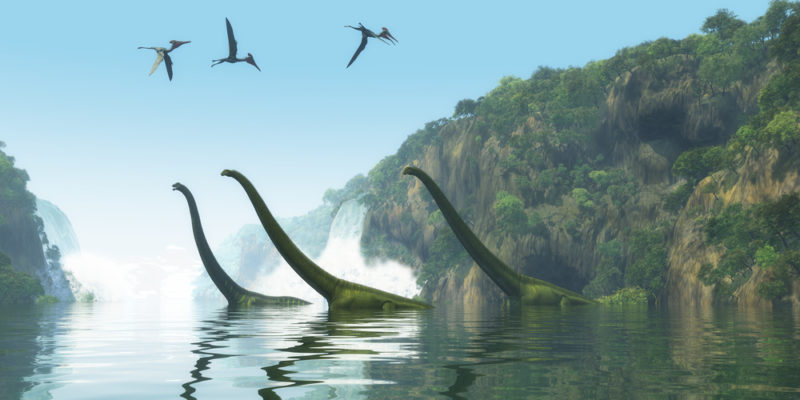 During the Triassic the earth’s surface was dominated by reptilian life.

Triassic animals can be distinguished into three categories:

Both categories of new species took advantage of the vacuum left by species that disappeared during the extinction.

The earth’s surface was dominated by reptilian life during this period. Among them, the mammalian reptiles stood out , who left the legacy of the true mammals of the Jurassic.

The other species evolved into large herbivorous and carnivorous reptiles , as well as bulky insects . The membranous reptile species were capable of gliding from one tree to another, but not of proper flight.

The dinosaurs appeared at the end of the Triassic and quickly colonized the Earth, since they lacked competition. Some of the earliest species were Procompsognathus and Plateosaurus.

In the sea, the predominant predator of abundant molluscs (mainly ammonoids) was the Ichthyosaur, which evolved rapidly at the beginning of the Triassic. Gradually it was losing its reptilian forms, in favor of others more similar to those of the modern dolphin.

There would also be other aquatic reptiles towards the end of the period, such as Nothosaurus , Lariosaurus, or Askeptosaurus. Corals would appear in the middle Triassic. 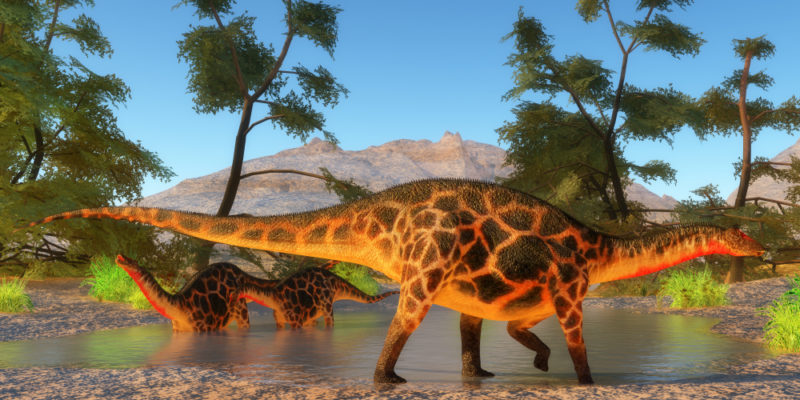 Mass extinction guaranteed the success of the dinosaurs in the Jurassic.

At the end of the Triassic, another mass extinction of land and sea species occurred, although not as severe as the one at the end of the Permian. An estimated 20% of marine biological families disappeared , most archosaurs, therapsids, and large amphibians .

This extinction guaranteed the success of the dinosaurs in the Jurassic , opening niches for them without competition on land and sea. The cause of this event is unknown, although the hypotheses range from climatic changes, changes in marine chemistry or massive volcanic eruptions.

Some of the largest paleontological sites of the Triassic Period are found in: 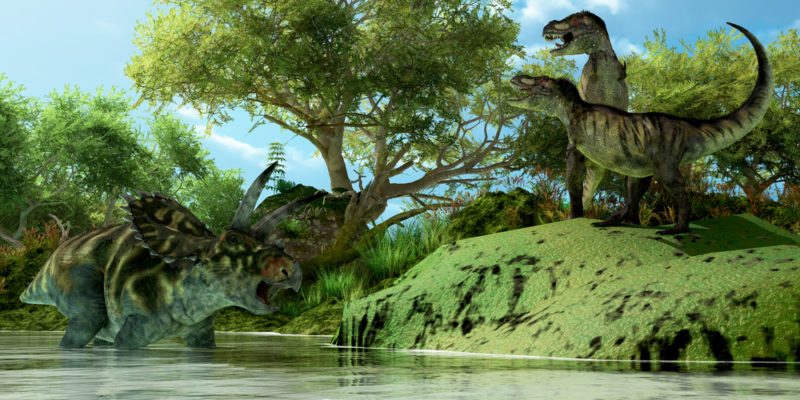 In the Jurassic, the fracture of the supercontinent Pangea began.

The Jurassic Period began 201 million years ago and ended 145 million years ago . It was the period in which the dinosaurs proliferated and reigned, which is why it is perhaps the most famous of the Mesozoic periods.

In this period , the fracture of the Pangea supercontinent began , the great dinosaurs proliferated, which conquered the land, the sea and even the air .