A Showdown between Fitbit Luxe and Apple Watch Series 6: Which is better? 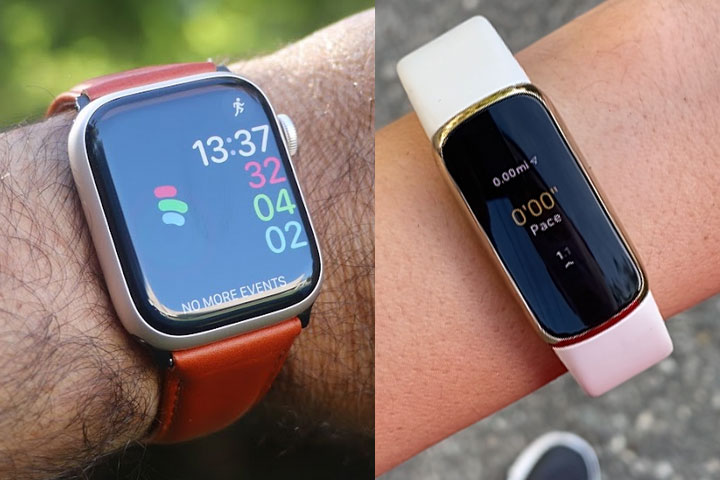 Monitoring of Health and Physical Activity

Which of these two options would you pick, then?

Apple products and Fitbit trackers currently hold most of the market share in their respective categories. Apple is known for making high-end smartwatches, whereas Fitbit is the industry standard for fitness trackers. Both smartwatches and fitness trackers have one thing in common: they can be difficult to understand for first-timers. Who, then, will come out on top? It’s between the Apple Watch 6 and the Fitbit Luxe.

This post is going to compare and contrast the greatest smartwatch that Apple has to offer, the Series 6, with the best fitness tracker that Fitbit has to offer, the Luxe. We have provided you with information regarding each gadget so that you can determine which one will serve your day-to-day needs in the most optimal manner. We will discuss some of the basic distinctions between them, as well as give our recommendation in an objective manner.

The size of each of these two devices is without a doubt the primary distinction between the two. Since the introduction of its first model, Apple has modified the Apple Watch lineup. The easily recognizable rounded square case is consistent with the design aesthetic of previous Apple devices.

The OLED display on the Series 6 is always active, and you can choose between a 40mm or 44mm case when you place your purchase. The case material can be selected from the options of stainless steel, aluminum, or titanium. The made-to-order procedure utilized by Apple guarantees that customers will have a pleasant experience when wearing their products.

Users are able to personalize the look of their watch by changing the band, which can be purchased separately. However, because of the huge casing of the Series 6, the replaceable bands will only serve to highlight its contemporary appearance. It appears to be a very “techie,” but in reality, it is a high-end digital smartwatch.

Therefore, the Fitbit luxury maintains the understated appearance of Fitbit’s Fitness Bands. It also features a color AMOLED display and a casing made of stainless steel (in available colors: graphite, soft gold, or platinum). The addition of the case gives the silky silicone band a more luxurious appearance and feel. Users who have smaller wrists will benefit from the tracker’s ability to be so thin and lightweight.

Because of Fitbit, it became necessary to design bands that resemble pieces of jewelry or traditional watches. In contrast to the Apple Watch, the Fitbit Luxe gives you the freedom to customize its look to a greater extent. The reason why Fitbit markets Luxe as a Holistic Wellness Tracker is because of this.

Monitoring of Health and Physical Activity

You most likely are aware of the reputations that Apple and Fitbit have in the health industry at this point. The Apple Series 6 and the Fitbit Luxe are high-end products, which means that this is the category in which they compete. These devices monitor your heart rate, blood oxygen levels (SpO2), skin temperature, activity, sleep, and menstrual cycle, in addition to the number of calories you burn. Both of these devices will provide you with personalized notifications and health-related reminders. We discovered that the quality of some characteristics was comparable to that of others, while others clearly excelled in comparison.

Both watches, for instance, are equipped with automatic workout detection. The Luxe will automatically begin to identify and record your activity once you have exercised for at least 15 minutes. It will do so based on one of the 20 workout modes. Using the Fitbit app, you have the ability to make modifications to the required minimum amount of time.

The most recent OS updates for the Apple Series 6 have enabled consumers to have more accurate automatic workout detection. We found that it had a higher degree of precision than the Luxe. If the Apple Watch recognizes that you are participating in a workout session, it will send you a notification that says, “It appears that you are working out.” After that, it will present you with sixteen distinct exercise modes to choose from.

Apple provides functionality that is not widely used but yet essential, such as the “wheelchair mode.” You are even given the ability to add a custom exercise, which compensates for the fact that there are four fewer exercise types. The Fitbit Luxe is equipped with a wide range of sport and activity modes, such as stair climbers and martial arts modes. As a result, it is strongly suggested that you spend some time becoming familiar with the various forms of exercise. Think about which pursuits are compatible with your way of life.

Both trackers provide comprehensive cardiac monitoring, but the Apple Watch Series 6 is the only one with an electrocardiogram (ECG). This allows you to determine the rhythm of your heartbeat (the pattern between each beat). Something that is missing from the Fitbit Luxe. In addition to tracking your heart rate around the clock, the optical sensor in the Apple Watch Series 6 can also determine the rhythm of your heartbeat. When it recognizes a pattern that is not normal, it will notify you. In the long run, this should help diagnose and treat any heart-related problems.

Fitbit is trying to bring tools for managing mental health to a wider audience of consumers. This is particularly noticeable in the Fitbit Luxe due to its more affordable price point. The Luxe will compile a stress management score by analyzing a variety of data points, including those relating to the amount of activity you get, the amount of sleep you get, and your heart rate. Your body’s capacity to deal with stress is evaluated daily using the score.

The “nature of the beast” of a smartwatch can be determined by the connection and “smart” functions it possesses. This knowledge raises the bar for performance in all of the other gadget areas (such as battery life or price). When comparing the capabilities of the Apple Watch 6 with the Fitbit Luxe, it is clear that there is a significant gap between the two smartwatches.

Both watches have the ability to receive notifications and monitor your movement, but the similarities between them end there. Because the Luxe does not have a built-in GPS, you will need to ensure that you always have your phone on you. The Fitbit function, known as “Fast Pair,” offers a simple and speedy connection to your Android smartphone, which works in conjunction with the GPS built into the device.

In a similar vein, the entry-level edition of the Apple Watch Series 6 cannot get notifications if it is not connected to an iPhone. However, for about $50 more, you can purchase a variant with cellular connectivity. Because the Series 6 incorporates GPS tracking directly into the watch, you won’t need to carry your phone with you when you work out. Not to add, the Apple Watch comes equipped with an altimeter that is always on and running, allowing it to monitor your real-time height.

The Series 6, in contrast to the Fitbit Luxe, grants you control over your music collection, both online and offline, thanks to its 32 GB of built-in storage space. Your smartwatch’s built-in microphone allows you to retrieve phone calls on the device. Apple Pay and Emergency SOS are only two of the many useful features that come along with it. As a result, it should be clear that the Series 6 is more than just a fitness tracker.

The duration of use of the battery is where there is a big difference. According to Fitbit, the Luxe has a battery life that can last up to 5 days on a single charge with normal use. On the other hand, the Apple Watch needs to be charged daily, although it has a battery life of up to 18 hours. Those who don’t want to take the chance of losing any of their valuable fitness or sleep data may find this to be a significant disadvantage. Nevertheless, the charging time for either device is relatively short to effectively charge the battery in the downtime between jobs.

The Fitbit is a premium health and fitness tracker. Therefore it places a strong emphasis on providing detailed health indicators. As a result, it should not come as a surprise that Fitbit takes great satisfaction in the extended battery life of their trackers. The inability to maintain battery power can result in the loss of essential data. If you find that charging the battery in your watch daily is an inconvenience, then the Fitbit Luxe is the obvious choice for you.

Which of these two options would you pick, then?

What did the judge decide? Which is better, the Apple Watch 6 or the Fitbit Luxe? If you are the type of user who will fully use the powerful capabilities of the Apple Watch Series 6, we recommend that you get that model. It’s not just a fitness tracker; it’s a smartwatch that helps you stay productive, stay connected, and do much more. The Apple Watch is a great option for you if you place a higher priority on having a high level of functionality and a lavish lifestyle than you do on having a magnificent aesthetic.

On the other hand, it’s possible that you’re the type who favors a watch’s traditional and less intrusive appearance. If you want to keep things simple with your smartwatch, the Fitbit Luxe is your option. If you need to increase their Fitness but do not want a steep learning curve, the Luxe package is the best option.

After you’ve finished reading this article, we strongly suggest you take a day or two to reflect on the things that go on in your life regularly. Consider the advantages they offer as well as the role they will play in your routine. Think about the things important to you in a digital watch and the activities you participate in. In addition to that, be sure to keep your priorities and routines in check by being as practical as possible.

Which of these two products, the Apple Series 6 or the Fitbit Luxe, do you find yourself reaching for more often?

If that’s the case, why?