Ants: What Are They, Habitat, Diet And Characteristics 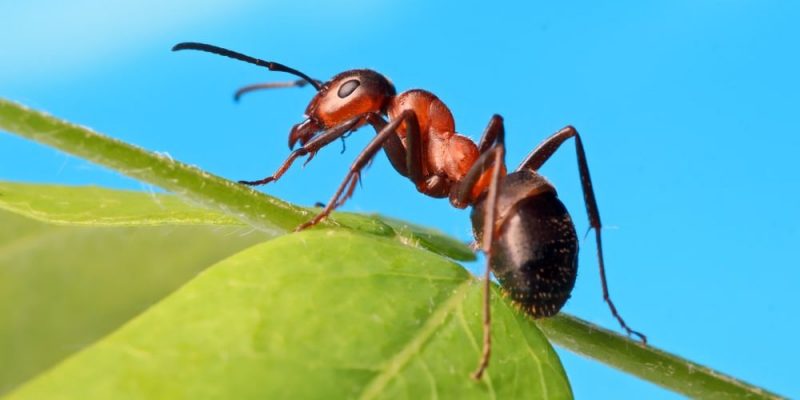 Origin and evolution of ants

Where do ants live?

How do ants feed?

How do ants reproduce?

How do ants communicate?

We explain what ants are, what their habitat and food are like. Also, what are its general characteristics, reproduction and more.

Ants are a type of insect belonging to the Formicidae family . They are zoologically related to bees and termites, the so-called eusocial insects . They are famous for their cooperative life and industriousness.

Ants are small insects, ranging between 2 and 25 millimeters and varying in color from black to brown, red or yellow. Its body is made up of a head (with antennae and chelicerae), a mesosome (thorax and first abdominal segment), and metasoma or gaster (final abdomen).

Some species have deposits of poison (stingers) or formic acid that they use as defense. In addition, they have unique morphological characteristics among insects, such as their elbow antennae, metapleural glands and two pairs of jaws: the first to hold objects (up to 50 times the weight of the animal) and the second to feed.

Origin and evolution of ants

Ants appeared in the fossil record in the Cretaceous period , more than 90 million years ago.

It is estimated that at that time they were a minority species among insects (1%).

Their morphology has been found to be more similar to their cousins, bees and wasps.

Their worldwide expansion is estimated 60 million years ago , when after the adaptive radiation of the Paleogene they became a dominant life form among insects.

Where do ants live? 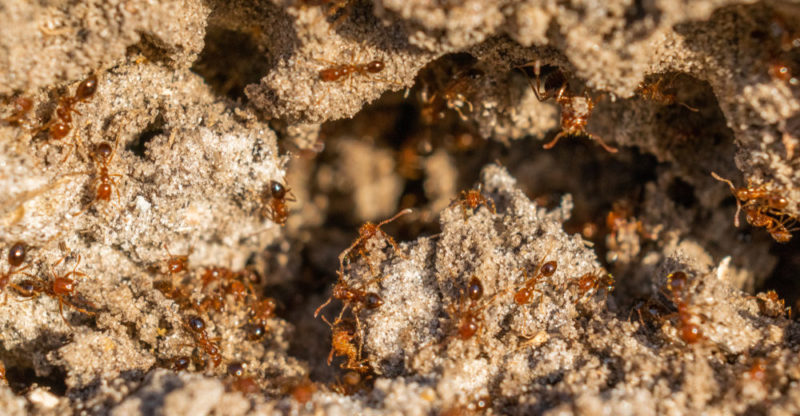 Ants are present on all continents except the Antarctic , and on some large islands such as Greenland, Iceland and Polynesia. They occupy the most diverse ecological niches, oscillating between nomadism and the construction of simple and complex colonies.

Their colonies are called ant hills and they can build them underground , in trees or in cracks of human constructions. They coexist with humans and in many places constitute veritable pests, destroying crops or raiding home pantries.

How do ants feed? 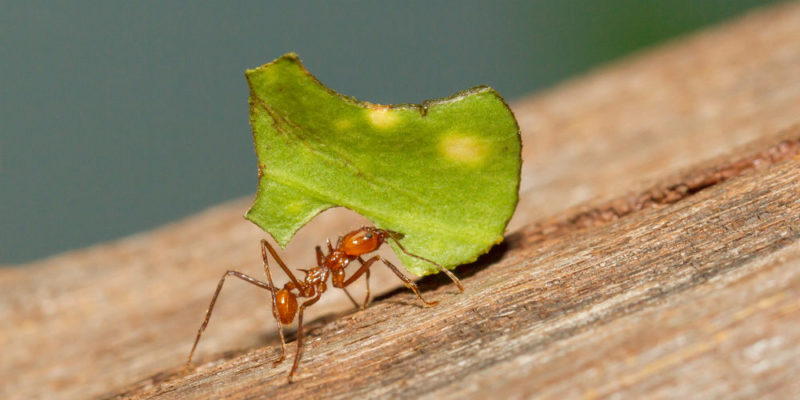 Ants are generally omnivorous . On the other hand, depending on their ecological context, they can be scavengers , predators or herbivores , sometimes with a high level of specialization. However, his direct methods of nutrition are worthy of a separate mention.

For example, leaf- cutter ants generally don’t use them for food , but rather to feed a certain type of fungus that grows inside their colonies. They take care of it by providing it with only organic matter of its convenience. When the fungus emits structures called gongylidia , the ants can feed on them.

In other species, the larvae directly nourish the queen with their hemolymph (the blood of insects) through specialized glands in their thorax. This leads in many cases to the ants piercing the larvae, feeding directly on their fluids but without killing them. These species are known as “vampire ants”. 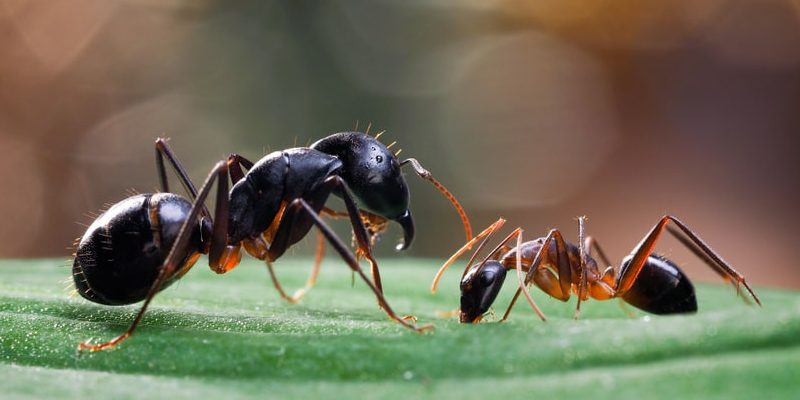 The ants do not occupy the same rung within the hive, but are rigorously stratified according to their functions and, therefore, their ways of life. Thus, we have several types of ants:

How do ants reproduce?

The larvae go through a pupal period before becoming adults.

Ants produce a new generation of insects every year . For the cycle to begin, young and virgin queens (“princesses”) must fly during a specific time of year to meet a male that fertilizes them, in what is called the “nuptial flight.”

Then the princess founds a new colony, for which she devours her own wings for sustenance, while laying eggs . Larvae emerge from these which, as they grow, become pupae and then adults: workers, soldiers, males or other queens. Only queens have the ability to reproduce.

How do ants communicate? 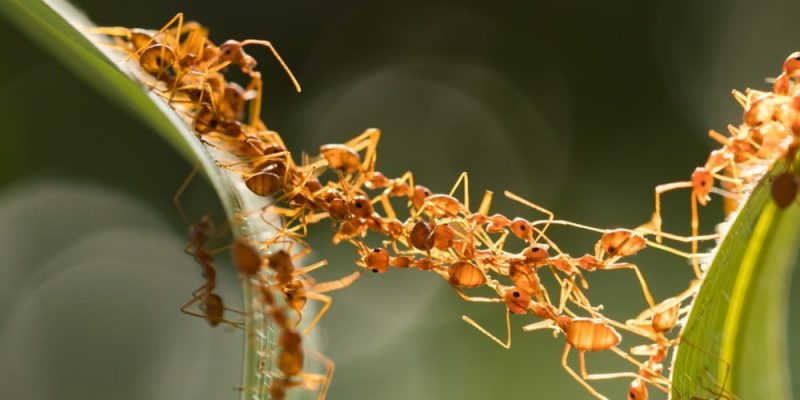 Thanks to their communication, ants act together as a supra-individual.

These insects have a type of chemical communication , through the secretion of pheromones perceived by their antennae. This allows queens to attract males, but also males to enter a colony and be identified as such, to be led to fertilize the queen.

Similarly, a male can defend his colony from others by marking them with a bite that chemically designates him as an enemy, making him prey to all the workers in the hive.

The workers also leave a trail behind them that can be read by the others, indicating the way to food, or warning them of some danger. It is for this reason that ants reach such a high level of cooperation , acting together as a supra-individual. 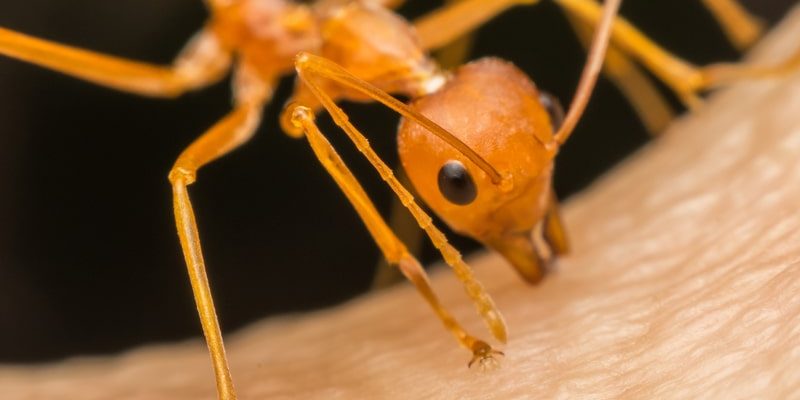 In general, ants defend themselves by biting with their pincers.

Most ants defend themselves by biting with their pincers or, if they have it (only a few species), by stinging with their stingers. Either way, they are capable of injecting or spraying their enemies with formic acid or different alkaloids.

Its sting is painful but rarely fatal . However, there are specific species whose toxins are particularly virulent or that can kill a sensitive person , in a similar way to what happens with bees.

Ants are extremely territorial creatures , and they tend to guard their nest surroundings fiercely. They attack any other insect or animal found there, even if they are rival colonies.

In this way, a real hive war can occur , in which some invade the other to kill the queen and thus prevent the reproduction of the colony. 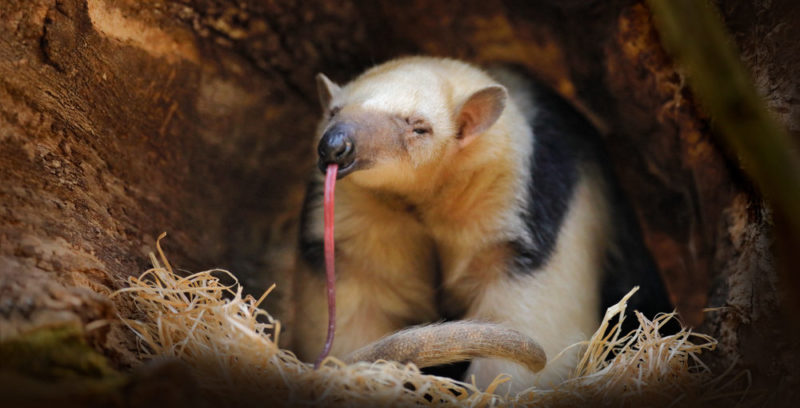 The anteater’s tongue allows it to devour many at once.

Ants support many amphibian species , including frogs, toads, and salamanders. They are also food for large mammals such as the anteater, whose long, sticky tongue allows it to attack the ant hills and devour many at once.

However, there are also many creatures that develop commensal or symbiotic relationships with ants. For example, there are birds that take “ant baths” perching on ant hills, so that the insects rid them of lice and other parasites in their plumage.

These insects have always coexisted with humans , who have made them a symbol of industry, teamwork , and sacrifice for the collective well-being. On the other hand, it is also noted for its rigid hierarchies and the anonymity of the workers.

Her appearance in Aesop’s fable “The Ant and the Cicada” is famous, in which she is represented as far-sighted, committed and hard-working, unlike the lazy and easy-going cicada.

In many countries ants are part of the gastronomic menu , toasted or cooked in different ways. In other places, by contrast, they are a pest to deal with, invading fields and homes. At the same time, ants can be an excellent agricultural resource in the fight against other parasitic insects.