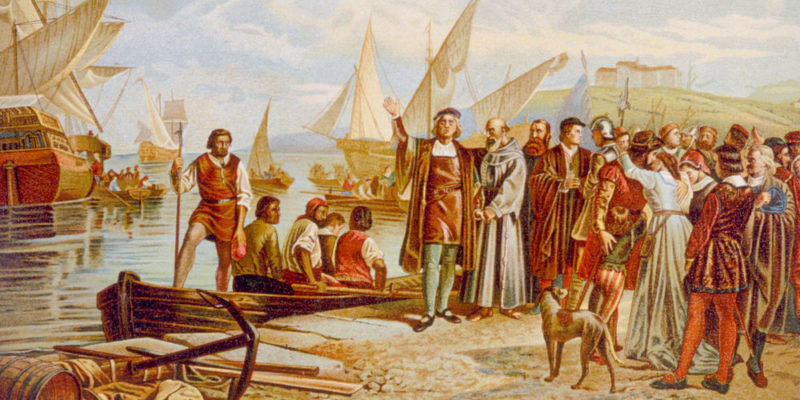 The division of the continent

The expansion of the Catholic Church

The myth of El Dorado

The start of globalization

Regions not controlled by the conquerors

Discrepancies around the term

We explain everything about the Colonization of America, the distribution of the territory between the European powers and its main characteristics.

The European colonization of the American continent was a historical process of appropriation and occupation of the overseas territories recently “discovered” by Columbus in 1492, by the great European powers.

The main stakeholders in the division of the so-called New Continent were the Spanish Empire  and the Portuguese Empire, and later the British Empire , the Kingdom of France and the Netherlands. There were also much smaller initiatives from Germany , Denmark, Sweden, Russia, Italy, and Scotland.

This process began at the end of the 15th century and culminated in the numerous American Wars of Independence of the 18th century that gave rise to a group of young autonomous republics, whose destiny was to become the current American countries.

In general terms, colonization of the American continent is understood as the set of two different stages: 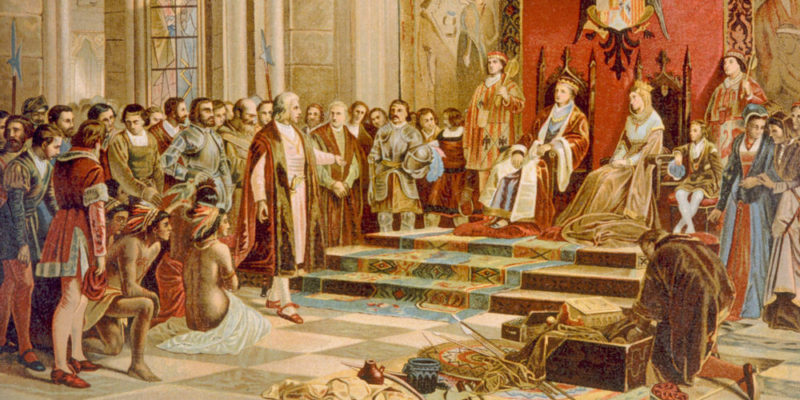 The arrival of the European colonists to America was not exactly in peace . They came in search of new territories to annex to their different empires, thirsty for new riches and in open competition for world supremacy.

The different kings legally administered the permits for the conquest , which were financed by the insurgent bourgeoisie of the time and which basically consisted of military occupations and the forced foundation of the first European settlements on the continent.

This implied, of course, subjugating the different aboriginal nations that resisted looting , if not simply eradicating them or reducing them to reserves, as in the case of the British conquest. To this must be added the weakness of the native peoples in the face of smallpox and the different diseases that the Europeans brought with them, whose consequences were felt beyond the end of the war, as well as their systematic annihilation in forced labor imposed by their conquerors.

The total victims of the invasion of the American continent are estimated at about 70 million dead , the largest slaughter in the history of mankind.

Since the decimated aboriginal populations were not sufficient in number and skills for the founding work and economic support of the nascent European colonies, the forced transfer of African slaves to America began.

These individuals were uprooted from their lands and sold to European colonists and landowners to start the exploitation of the various economic assets that abounded in the New Continent, whether agricultural, mineral and fishing.

The black slaves lacked all kinds of rights and were subject to the will of their white masters, while the Indians occupied a state of semi-slavery called serfdom, charged with domestic and exploratory tasks. None, however, was considered a free individual, nor did he have the right to property or property. 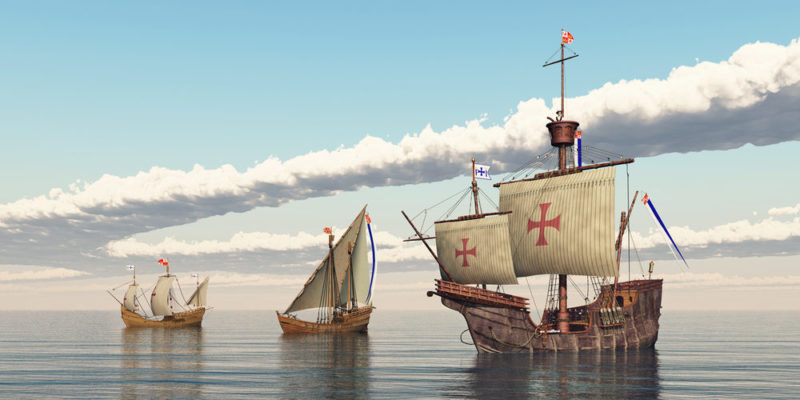 The English assumed total control of the territory of the North American continent.

Broadly speaking, the distribution of the American territory among the main European powers was as follows:

The colonization of America led many indigenous languages to extinction.

One of the strongest marks of the Spanish colonist was his rabid anti-reformist Catholicism , a product of the exclusion of Spain from Renaissance philosophies during the Reconquest (722-1492) against Islam .

This determined that the Catholic Church played an important role in the conquest , as a moral and cultural arm of the Spanish imposition on the American peoples. The principle of “Lands for Christendom” or of winning souls for the Church , justified the principle of violence as a mechanism of forced conversion.

In all fairness, it should also be noted the papal bull Sublimis deus , promulgated by Paul III in 1537, which affirmed the right of the indigenous to freedom and to receive a Christian education. This protected the decimated indigenous population from the brutalities of slavery , but not from the cultural imposition that prohibited their customs and sentenced most of their languages to extinction.

Besieged by the Protestant reform of northern Europe, the Catholic Church found in the conquest of America and in the predominant role that, together with its Holy Inquisition, played in the order of the nascent colonial society, enough oxygen to survive to this day.

The inordinate ambition of the Spanish conquerors, who used to be ordinary citizens seeking their fortune in the Americas to return to an improved position in Europe, often led them to believe in legends of uncertain origin, regarding cities made all of gold and silver and other riches.

These imaginary cities were called the El Dorado Indians , and many expeditions were lost following their supposed trail in the jungles of the Amazon. 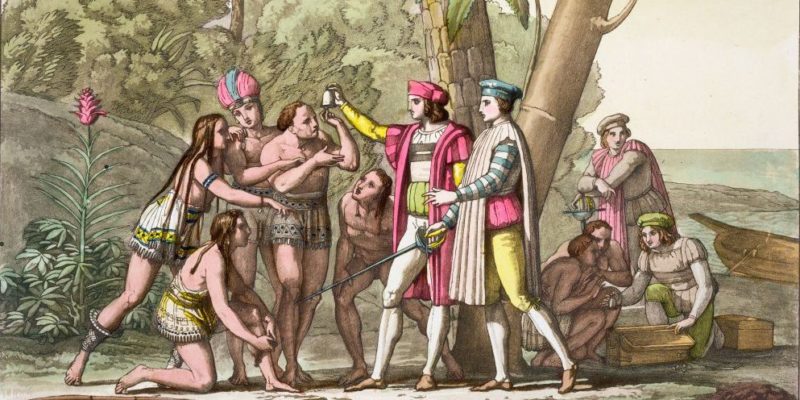 The colonization of America gave rise to the exploitation and trade of its natural resources.

The conquest of the American territory, rich in resources and in exploitable territory, and even more so the subsequent constitution of a colonial society, legally dependent on Europe but much more vital economically, laid the foundations for intercontinental trade and many companies. exploitation of products that ensued.

This became particularly notable after American Independence , when the young nations became the largest and closest sellers of raw materials to the West , a role they still occupy, displacing even trade with India and the eastern colonies.

Colonial society upheld its racial norms until the end of its days , but that never meant that there was no contact and syncretism between the races. It was common in colonial Brazil for Portuguese settlers to take indigenous wives and generate offspring difficult to catalog, the same as Spanish masters did with their black slaves, giving rise to families parallel to that of their European marriage. English settlers, on the other hand, mostly Puritans, were always reluctant to mix.

It was necessary, then, new designations for the resulting mixtures , whose most arbitrary term would be that of “brown”, a category in which everything that was unclassifiable and suspiciously mixed entered.

Just like the racial distinctions, the cultural ones were not as sharp as it might seem , and the prolonged coexistence between the races led to a growing syncretism, the result of which is the cultural melting pot that today characterizes Latin America . 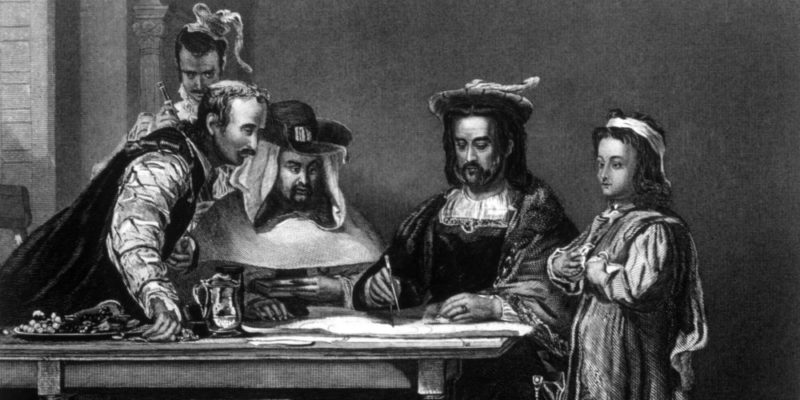 Colonial society was led by a white and European upper class.

Although racial distinction was key in the distribution of rights during the colony , with a practically zero margin of social mobility, it was participation in manual labor, something very frowned upon according to the prevailing Catholic doctrines, that separated the elite of the lower classes .

In this way, colonial society was made up, in the first place, of a minority white and European upper class that held the positions of state civil servants or engaged in trade through large production plants with slave hands. Second, by an indigenous serfdom and a varied mestizo sector that occupied an intermediate commercial position, and finally the black, mulatto or zambos slaves, in charge of mining, agricultural and labor tasks.

This system of inequalities was key to sowing the seeds of the liberating rebellion that, in many cases, offered the possibility of a heterogeneous society of free and equal citizens.

Some areas of more difficult access or more questionable survival, such as the Amazon rainforest , southern Patagonia, the Gran Chaco and the deserts of northern Central America, could never be reduced to the control of Europeans.

Thanks to this they remained, and some still do today, as the last bastions of pre-Columbian societies on a continent that was taken from them. 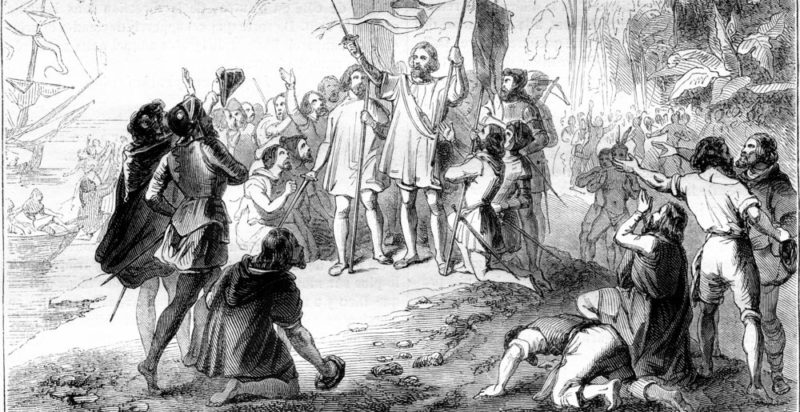 The term “discovery” has been questioned to refer to the arrival of Colon to America.

Believe it or not, there are still conflicting positions regarding the way in which the American conquest and colonization should be named and remembered. Indigenous movements and aboriginal memory movements have fought for the visibility and recognition of the massacre of native peoples, against euphemisms such as “the meeting of two worlds” or “ the day of the race .”

The term “discovery” has even been questioned to name the arrival of Columbus to the Americas in 1492, given that there were already societies occupying that territory and that, on the other hand, the Viking peoples had already visited eastern Canada in earlier times.

The truth is that the debate around the term continues, evaluating the cultural contributions and the rapid modernization that the conquest imposed on the continent, but also the enormous human cost that this entailed.