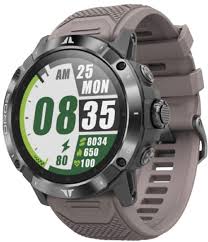 At long last, a Garmin can record electrocardiograms

Either touch screens or solar panels, but not both

Garmin’s soon-to-be-released Fenix 7 and Epix 2 sports watches have received a few more details since their first announcement. It would appear that both will be able to do electrocardiogram (ECG or EKG) measures.

The information, as stated previously, was obtained from winfuture.de. To refresh your memory, about two weeks ago, they published what they assert to be genuine pictures of the Garmin Fenix 7 and EPIX 2 watches. Both are anticipated to begin their operations in the coming weeks.

The firm will be present at CES 2022 and has previously disclosed that it will be releasing the Venu 2 Plus. Since the event is scheduled to end on Saturday, it is quite unlikely that any further announcements will be made in the time remaining until the conclusion of the exhibition. Tuesday is the day that Garmin most frequently launches new products. Therefore the 11th and 18th of January are the dates that you should keep an eye on.

At long last, a Garmin can record electrocardiograms

A number of companies specializing in wearable technology have already introduced smartwatches and fitness bands capable of recording an electrocardiogram (also known as an ECG or EKG) from the wrist. This is a measurement of the health of the electrical activity in your heart as well as the rhythm of your heart. The technician is frequently used to diagnose signs of possible cardiac problems, including arrhythmias, coronary heart disease, and a variety of other conditions.

In this regard, Garmin has lagged far behind its competitors. However, we were aware that it already possessed this kind of functionality because of a Clinical Trial carried out earlier this year. This made it evident that the single-lead ECG gadget utilized for the research project is a “wrist-worn, consumer device” manufactured by Garmin. Data from a single lead is typically what can be obtained from smartwatches that use ECG technology.

Given this, we weren’t very taken aback by the report that a Garmin watch equipped with an electrocardiogram would soon be on the horizon. The choice itself is more unexpected than anything else. We would have anticipated seeing this on an all-in-one gadget like the Vivoactive 4 or the Venu. On the other hand, if the report from winfuture.de is to be trusted, it seems that ECG could make its debut on the Fenix 7 and the EPIX 2. The surprise comes from the fact that these are sports watches designed for athletes and explorers.

Specifications are the subject of the latest piece of information that was published on the German website today. You may find pictures of Fenix 7 and EPIX 2 in the prior item that we published.

The following table compares the purported technological capabilities of the various iterations of the Fenix 7 and the EPIX 2 cameras. Information on solar models can be found in the brackets.

Either touch screens or solar panels, but not both

As can be seen from the information presented above, the EPIX 2 and the Fenix 7 are, for the most part, interchangeable. The AMOLED display, which can be found on the Fenix series, has a significantly greater resolution than the MIP display, which is the primary distinction between the two types of displays. On the other hand, it does not have the solar capability found on the other three Fenix 7 watches.

The battery life of the EPIX 2 is the first thing that comes to mind. Battery life of up to 16 days for an item with an AMOLED display is really impressive. It will be interesting to see how long the watch can continue to function with the option for an always-on display. We’re going to predict four, but it could be five.

Solar energy is also gaining momentum. It is reported that the ring size on these models is more than in previous iterations. Therefore, they are able to extend the battery life of the Fenix 7X by nine days (versus three days on 6x).

According to the information provided on the German site, the Fenix 7 and the EPIX 2 will both have access to the ECG capability. We were making assumptions about the purpose of the red physical button on the top right of the leaked press images. This has been given a wholly new look, and the perimeter now has a knurled texture. It is currently unknown whether this is for an electrocardiogram or a rotating crown. It’s possible that an ECG reading may be taken using the metal around the button as a contact point.

Another piece of new information is that touch displays will be standard on every model. Except for the ones powered by the sun, that is. Therefore, you can either have solar power or a touchscreen, but not both at the same time.

According to what we have been told, you will be able to navigate the touch-enabled watches using either the display or the button. Once you begin an activity, the only way to interact with it is through the physical buttons. Because not all customers will be interested in the touchscreen capabilities, it is extremely probable that Garmin will include an option for users to disable it fully. On the other hand, one might find a touchscreen beneficial for navigating the system or using a map.

Naturally, Garmin has not confirmed or refuted any of this information at this time. Since the Winfuture.de website did not provide a source for its information, you should take all of this with a grain of salt.