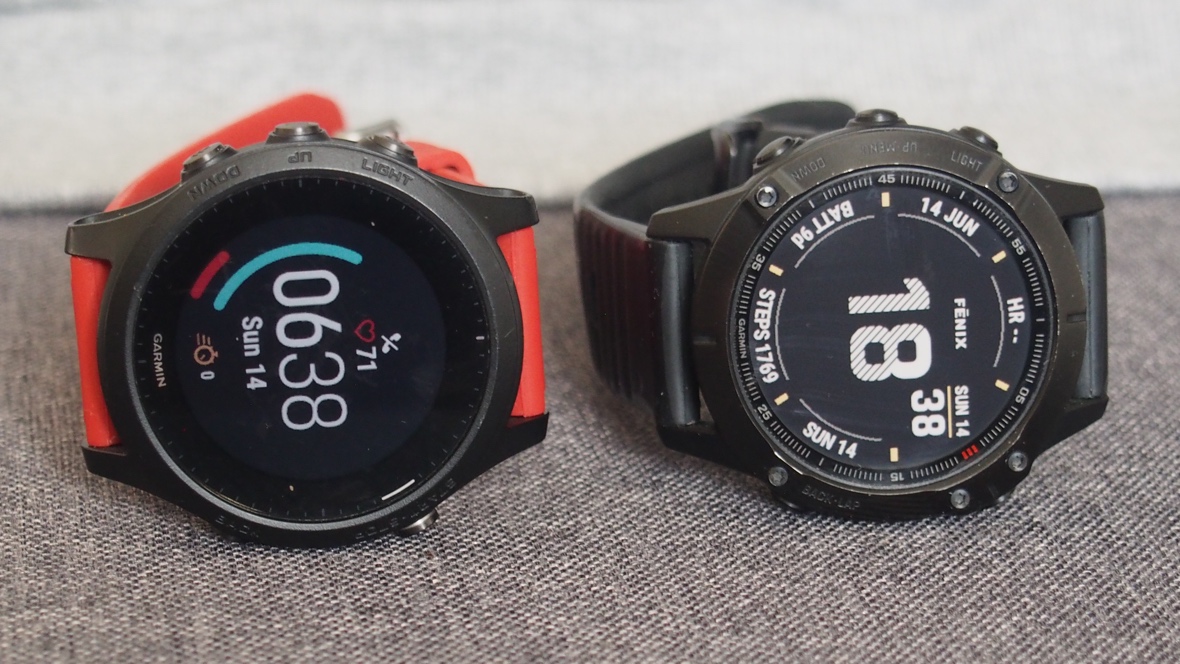 1. The Fenix 7 does not include an LTE connectivity option.

2. The Forerunner 945 does not have a touchscreen.

4. Additional profiles of activities on the Fenix 7

5. The Forerunner is smaller overall

More personalization options are available for the Fenix 7, which is available now.

Examining the Most Fundamental Aspects of Smartwatches

If any of the following apply to you, you should consider the Forerunner 945:

If any of the following describes your current situation, then the Fenix 7 is a better option:

Are you seeking a reliable smartwatch with many features that can be used for outdoor activities like running or hiking? Or does your active lifestyle necessitate a smartwatch with a more sophisticated set of functions than you now have? Your answers to these questions will help you choose which of these two smartwatches from Garmin—the Fenix 7 or the Forerunner 945—is the more suitable alternative for you to consider purchasing.

In today’s comparison, the new Garmin Fenix 7 and the Forerunner 945 are going head to head against one another. Both of these watches are high-end smartwatches that come loaded with a tonne of different functionalities, which means that there are a lot of various ways in which you may compare and contrast the two of them. However, given that this information is not likely to be of much assistance to someone trying to choose one of these options over the other, we are going to start by comparing some of the more significant aspects of the new Garmin Fenix 7 and the Forerunner 945. Both of these options are GPS running watches.

1. The Fenix 7 does not include an LTE connectivity option.

Depending on your preferences, you can acquire the Forerunner 945 LTE with or without the LTE function. There is no question that it has the capability to use LTE networks. The Fenix 7 cannot make phone calls or send messages, but it does contain Garmin’s Smart Notifications feature. This feature allows the user to be notified of certain events. Even if you are not actively paying attention to either device, you can tell when someone is trying to get in touch with you if your watch and phone are synchronized. This is because you will receive a notification on both devices. Even though the Forerunner 945 does not have LTE connectivity, it can still support Smart Notifications thanks to its Bluetooth connectivity.

2. The Forerunner 945 does not have a touchscreen.

If you like to push the limits of your comfort zone, are an avid follower of any type of sport, or are simply someone who is always on the go, a touchscreen device might be something you’re interested in. The new Fenix 7 is available in three different sizes, each of which comes with a display that can be operated via a touch screen. On the other side, the 945 does not have this feature. Instead, Forerunners rely on control methods such as buttons and scrolling to navigate their world.

4. Additional profiles of activities on the Fenix 7

5. The Forerunner is smaller overall

The Forerunner 945 is more compact than the Fenix 7 in every way, which also contributes to the fact that it is lighter than its predecessor.

The Forerunner 945 weighs between 49 and 50 grams, depending on your chosen model.

The Fenix 7 has a display that is somewhere between 1.2 and 1.4 inches in size.

Both the Fenix 7 and the Forerunner 945 are smartwatches manufactured by Garmin, and both provide an extensive assortment of sensors to track one’s health. A pulse oximeter, a Garmin ElevateTM wrist heart rate monitor, a barometric altimeter, a compass, a gyroscope, an accelerometer, and a thermometer are all part of this collection of sensors. A barometric altimeter is one of several types of sensors. This makes no allowance for the locating and mapping sensors they possess.

It should come as no surprise, given that GPS devices were Garmin’s original product specialty, that navigation is one of the company’s key strengths in its products. The Garmin Fenix 7 and the Garmin Forerunner 945 are excellent alternatives for a GPS wristwatch. They will keep you on track with GPS, GLONASS, and GALILEO, which are all sorts of satellite-based navigation systems. Both of these watches are available from Garmin.

Both the Fenix 7 series and the 945 offer excellent battery life compared to the vast majority of other smartwatches. This is true regardless of whether or not they include a solar update. A notable advantage that the Fenix possesses over the Forerunner is that it can be modified with a solar panel, which can assist the watch’s battery to last for a more extended period of time. Upgrading to the solar-powered version of the Fenix 7 results in a price increase, but conveniently, Garmin makes the solar model accessible in all three sizes (7S, 7, and 7X) of the Fenix 7. In addition, making use of the GPS functionality won’t deplete the battery as rapidly as it does on other watches, which is a problem that frequently arises when using this feature on other watches.

As can be seen from a cursory comparison of the two models, the design of the Fenix 7 is noticeably more eye-catching than that of the 945. This is evident from the gleaming stainless steel bezel that is featured on the Fenix 7, as well as the significantly larger screen and more substantial case size. On the other hand, when contrasted with other versions of Garmin smartwatches such as the prior Fenix 6 series, Epix, or Instinct, both of these Garmin smartwatches have a more streamlined aesthetic and fewer functionality that is not necessary.

Even though it is, all things considered, a larger smartwatch than the 945, the Fenix 7 has design elements that help make it rather pleasant to wear and may even be a little bit easier to operate than the 945. These features include buttons that are more compact and do not stick out as far, a backing that has a more uniform texture throughout, and sensors that are more smoothly integrated into the watch itself. This is because the Fenix 7 has a larger display than the 945.

Because you are more likely to use the touchscreen feature on the Fenix 7, it makes sense to have buttons that are less visible on the device. This is because you are more likely to utilize the touchscreen function. Are you barred from using the button controls in any capacity at no point in the game? The fact that the screen on the Fenix 7 is somewhat more significant than the screen on the 945 is another valuable feature of the former. (1.2 inches as opposed to somewhere between 1.2 and 1.4 inches). The touchscreen display of the 7 is protected by a bezel made of stainless steel and, depending on your personal desire, either Power Glass, Corning® Gorilla® Glass DX, or Power SapphireTM.

Corning® Gorilla® Glass DX is included in the Forerunner 945 in all of its configurations, including those that do not support LTE. This feature is one of the contributors to the device’s remarkably high level of durability. The resolution of the smartwatches is relatively comparable, with only a minute distinction between the Fenix 7, which has approximately 260 by 260 pixels, and the 945, which has 240 by 240 pixels. Both smartwatches have a resolution of 240 by 240 pixels.

More personalization options are available for the Fenix 7, which is available now.

If you are in the market for a running watch, and especially if you are searching for a second watch that will function just like a running watch, then the design of the watch might not be a priority for you. This is especially true if you search for a second watch that will function as a running watch. The Forerunner 945 is a smartwatch that is only available in black or white and has a limited amount of design alternatives, despite the fact that it is a compact device and does not weigh too much. On the other hand, given the circumstances of your particular predicament, it could very well be the best option for you to take. On the other hand, the Fenix 7 comes in a total of six different color combinations, and you may choose whichever one you like best.

Examining the Most Fundamental Aspects of Smartwatches

If any of the following apply to you, you should consider the Forerunner 945:

If any of the following describes your current situation, then the Fenix 7 is a better option: