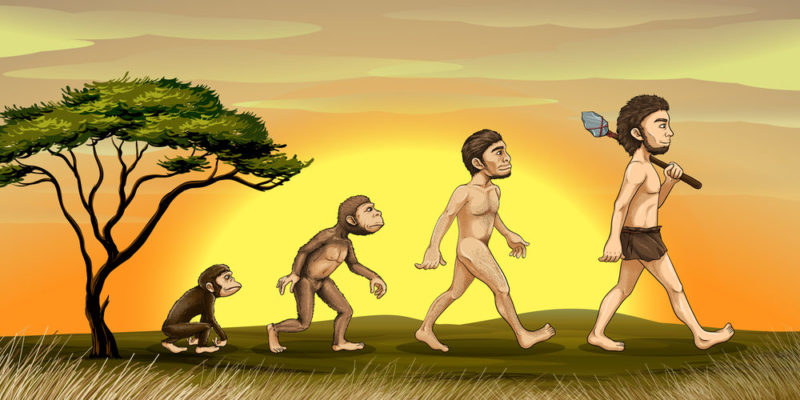 What was human evolution?

Theories about the origin of humanity

Future of the human species

We explain how Human Evolution was and the main theories of its development. In addition, its characteristics and species that existed.

What was human evolution?

We speak of Human Evolution or Evolution of the human being to refer to a dynamic process of adaptation and biological change . It began in Africa sometime 5 to 7 million years ago, when the most remote ancestor of our species emerged.

In other words, it is the process of biological change that, over several million years, caused the appearance of the species Homo sapiens in the world.

This process began with the inauguration of the hominin genus , that is, the bipedal primates, considerable ancestors of the human being . They became detached within the hominid family (higher apes), diverging from chimpanzees ( Pan troglodytes ) in their evolutionary course.

The study of human evolution is of interest to various disciplines, such as anthropology , genetics , paleontology , stratigraphy, geochronology, archeology, and even linguistics.

Theories about the origin of humanity 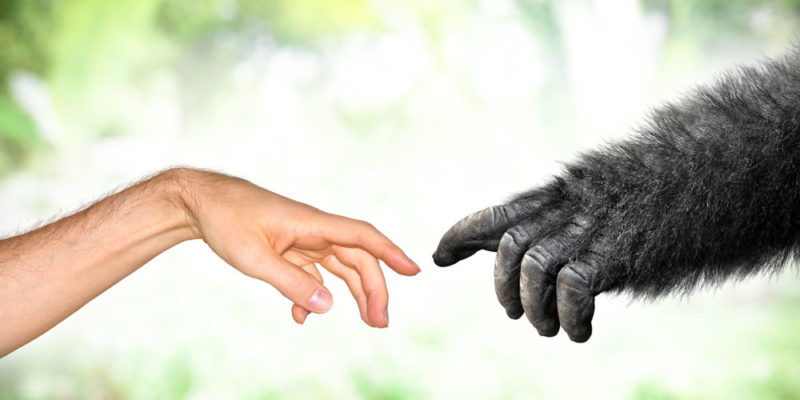 Various investigations affirm that humans are related to animals.

The origin of humanity has been an ancient , millenary question , to which only in recent times have we been able to give a satisfactory objective answer.

In sacred and ancient texts are mystical, religious or magical theories that supposed man the fruit of a divine miracle. This logic is called creationism and is defended by all religions.

There were other theories, some of which pointed to outlandish phenomena like spontaneous generation or extraterrestrial causes.

Finally, when science was a tool at the disposal of humanity, research in various fields was feeding the theory that the human being would be biologically related to animals (something that does not seem so difficult to accept and demonstrate).

In the 19th century Charles Darwin published his theory on the origin of species , from which the idea of evolution as “descent with modification” was proposed.

As a consequence, it was proposed that man evolved just as other animals did , from simpler forms of life with which he still shared many traits. This logic, nowadays proven by scientific discourse, was called Evolutionism.

It is often said that the human being descended from the ape . In scientific terms, that is not exact: it would be preferable to say that we are distant relatives of chimpanzees, since at some point 5 to 7 million years ago, there was a species of African primate from which both humans and chimpanzees descend .

This species, our last common ancestor with monkeys, found itself at a vital crossroads and ended up separating into two groups:

This second group went through new life situations with new challenges and new changes. Its long journey of several million years, culminates precisely with the appearance of the human species , the last of which is precisely ours. 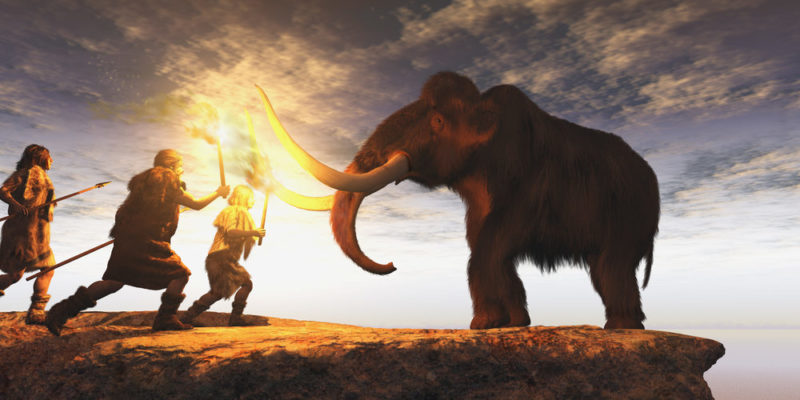 One of the main features of human evolution, and perhaps the first that marks the beginning of the path that leads to our species, was the upright posture in the hind limbs .

It is estimated that this posture arose to walk more effectively in the African savannas , being able to run with greater speed. In addition, when moving it was possible to keep an eye over the grasslands that predominated in the region, and that could hide predators .

In this way, the apes that stood on two legs outlived those that still walked on four. As a consequence, this trait was imposed, modifying the conformation of the body so that the skull is firmly located at the top of the spine. 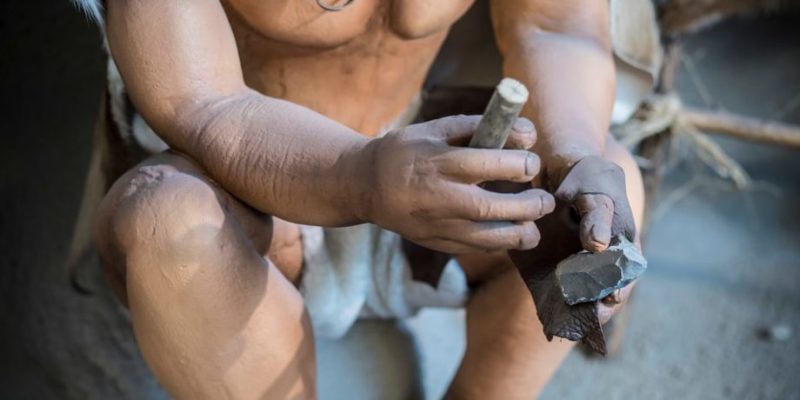 The opposable thumb made it possible to create and use tools.

By learning to walk upright, ancient proto-humans had their upper limbs free . They were then able to use them for other things, such as eating while walking, holding young while fleeing a predator, transporting food, or starting to use tools.

Stones, bones, pieces of wood were the initial tools that our ancestors had. They mark the beginning of a technological learning that leads to the sophisticated tools that we have today.

To be able to use tools, it was necessary the ability to oppose the thumb to the rest of the fingers of the hand , developed over the millennia of evolution. That simple gesture, impossible for primates whose arboreal life, allowed us an indispensable fine motor skills. 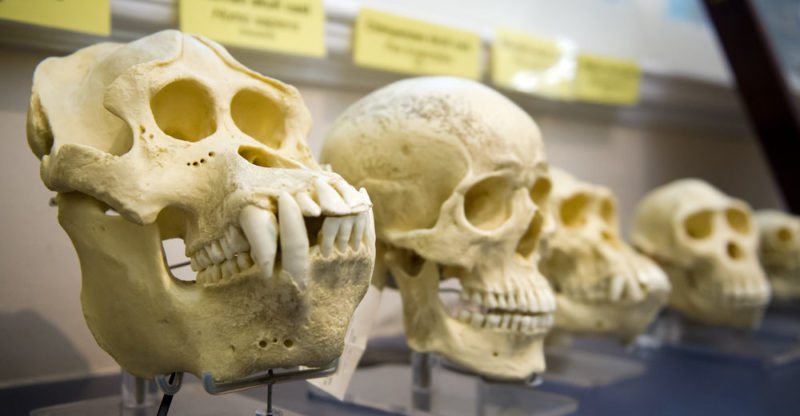 The increase in brain volume implies the capacity for greater cognitive processes.

Along with the development of manual talents and the use of primitive tools, the growth and complexity of the brain were key processes in human evolution.

As we progress through pre-human hominin species, cranial capacity increased from 350 cc. of the first Australopecines, up to 1200 to 1400 cc. of brain content of Homo sapiens .

This increase in brain volume implies the capacity for greater cognitive processes , broader, deeper and faster reasoning. In addition, it allowed the capacity for learning and abstraction that is the fundamental trait that distinguishes us from other animals .

These changes implied the creation of more complex tools and a growing understanding of the universe that surrounds us, even through myths and stories. In addition, it allowed the development of an articulated and symbolic language.

Although communication is an element related to all forms of life, language is something exclusively human .

Some animals can understand and associate certain instructions with desired or unwanted behaviors . Others, like chimpanzees, are able to understand certain communicative rudiments through sign language.

However, in none of these cases is it an articulated language . A system based on sounds and signs that translate into complex ideas is unique to our species.

This element was another vital factor in our evolution , especially when competing with other human species such as Homo neanderthaliensis , with whom we shared thousands of years and who ended up becoming extinct, despite the fact that they were much more robust and resistant.

It is estimated that their language was much more primitive and limited than ours , which gave us an advantage when it came to organizing ourselves socially or reaching higher levels of understanding and planning . For example, it was a key skill in hunting or in war. 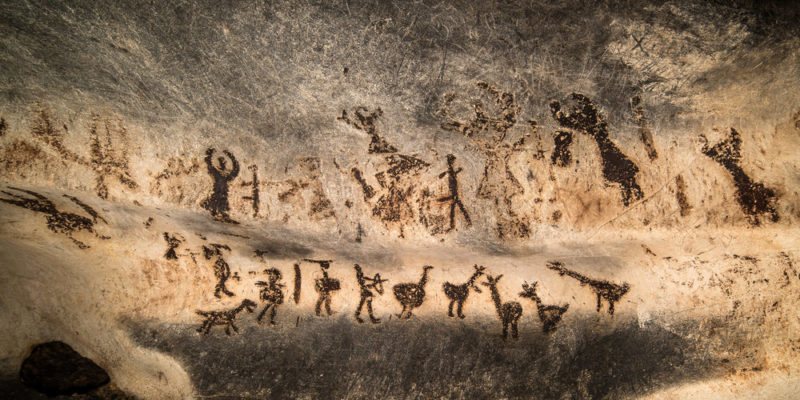 Art and culture are a reflection of our ability to think.

The most sophisticated forms of culture and artistic expression among all the human species that existed were reached by Homo sapiens. However, some ancestors left traces of their existence . Additionally, Neanderthals are also suspected of leaving behind cave paintings and other forms of prehistoric art.

In our civilization, the arts and culture are a reflection of our ability of thinking , our spirit expressive and creative . Furthermore, they are a highly valued aspect of our existence, unique among all forms of animal life.

The main human species that preceded us were:

It should be understood that these species did not “become” one another , but often coexisted in different regions of the world and gave way to future ones that displaced them.

Future of the human species 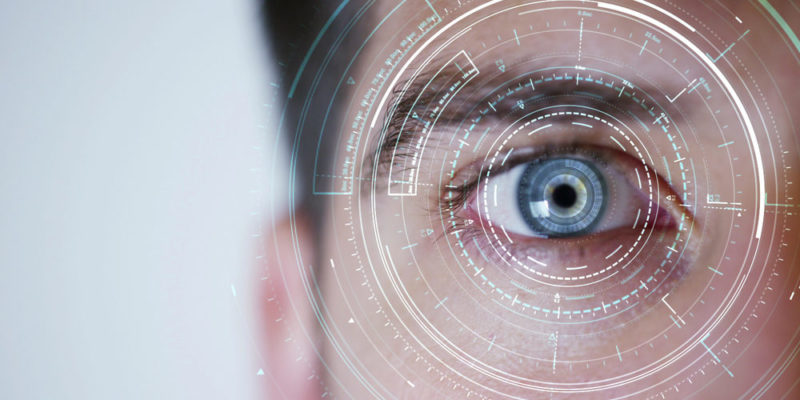 It is impossible to predict where human evolution will lead in the future, as the parameters on which it was based have radically changed . One could speak of an evolution no longer by natural selection, but by artificial pressures, by the human being’s own hand.

The global mobility of our species makes genetic variation more difficult. Selective pressures are focal and transient, so the species is likely to undergo only minor changes in the near future , such as those evidenced by the loss of wisdom molars, appendix, and other unnecessary evolutionary remnants.