Who Was Michelangelo? Know About His Birth, Biography, Life, Works, Recognitions And Characteristics 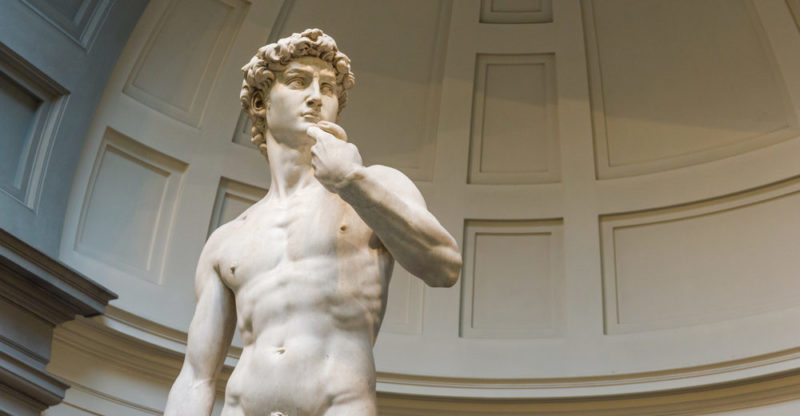 Drawings and designs by Michelangelo

We explain who Michelangelo was, what life was like and the different works of this artist. In addition, its characteristics and recognitions.

The Renaissance artist Michelangelo Buonarotti, known in Spanish as Miguel Ángel, was an Italian painter, sculptor and architect , considered one of the greatest artists in the history of mankind.

He developed his work between Florence and Rome for seventy uninterrupted years, having as patrons the Medici family of Florence and different Roman Popes.

Michelangelo is considered one of the most emblematic Renaissance artists , whose work embodies the spirit of the time with its return to the classical Greco -Roman tradition and its coexistence with the motifs of Catholic Christianity .

His works are characterized by an enormous expressive power and a degree of realism that his contemporaries, all admirers of his genius, called Terribilità (“The terrible”). Thus they tried to account for the unique and overwhelming style of Michelangelo’s works.

Today his legacy is considered one of the most valuable of humanity and has inspired numerous artists and thinkers, even reproducing itself in various formats, clothing and objects for mass consumption.

His mother died when Michelangelo was just six years old.

It was a run-down wealthy family , whose income came from a small estate in Settignano and a marble quarry in Florence.

Due to family emergencies, in Florence he was raised for a time by one of the master stonemasons of the family, whose wife Michelangelo would remember as his nurse, to whom he owed not only breastfed milk, but also a passion for sculpture , according to his own words. 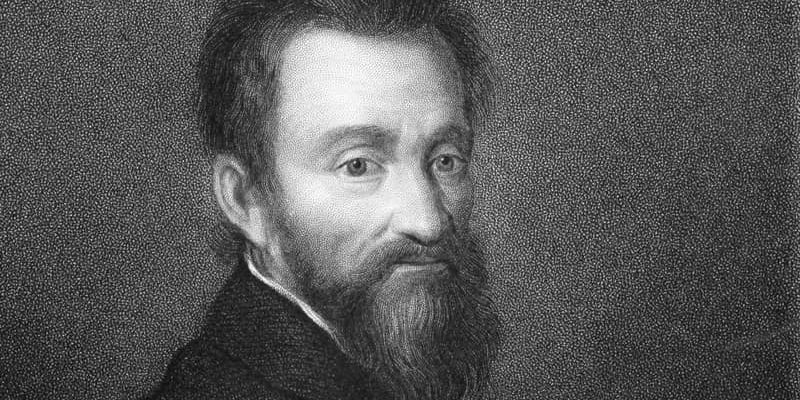 Throughout his life, Michelangelo had the support of various patrons.

Michelangelo did not have family support when deciding to dedicate himself to art , since it was not a very well-regarded job at that time.

However, he managed to enter the workshop of the famous Domenico and Davide Ghirlandaio , with whom he studied for three years.

From there it went to the Medici family’s San Marco garden , under the tutelage of Bertoldo di Giovanni. According to the latter, a punch received during that time left his characteristic flat nose forever.

Michelangelo had numerous patrons throughout his life , the first of whom was Lorenzo the Magnificent, after whose death in 1492 the artist wandered through Venice and Bologna, finally arriving in Rome.

There he made his first great works, which led him to the patronage of political figures of great importance in Italy at the time. At his request Michelangelo became the great master who has gone down in history.

His last years of life were spent in Rome , dedicated above all to architectural work , and in charge of teaching his disciples.

In that last period he was disappointed in humanity and focused his interests on religious poetry and drawings , leaving his project for the Vatican basilica unfinished when he died.

Michelangelo had numerous homosexual lovers , among which the young poet Giovanni da Pistoia stands out, who dedicated some beautiful and very passionate sonnets to him.

In addition , she fell in love with the young Tommaso Cavalieri , well off and a lover of the arts , when Michelangelo was already 57 years old.

Much later, the artist met Vittoria Colonna, a widow who represented Dante’s Beatrice for him , and with whom he cultivated a very ardent and aesthetically inspired friendship. His death in 1547 plunged the artist into the deepest pain. 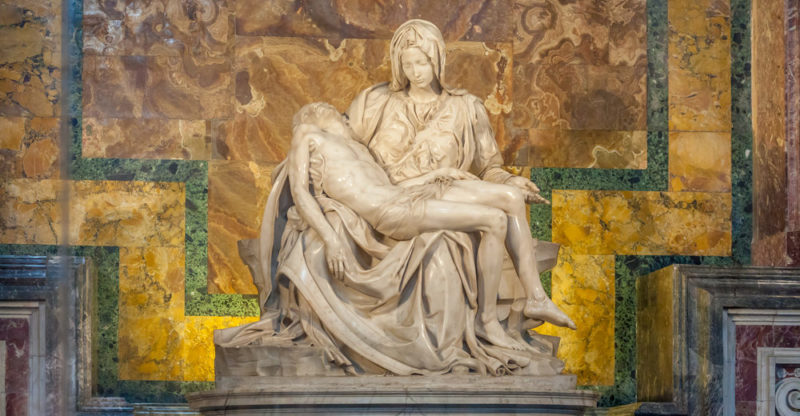 The Pietà measures 1.74 x 1.95 meters and is located in Saint Peter’s Basilica in the Vatican.

Michelangelo’s sculptures are perhaps the most recognized and celebrated aspect of his work , in which both classical motifs of the Greco-Roman heritage can be seen, as well as Christian scenes that would be central in the religious art of the time.

Many of these figures were destined for emblematic places in the city or for the tomb of their patrons, the Medici. Among the enormous set of sculptures that he left, the following stand out: 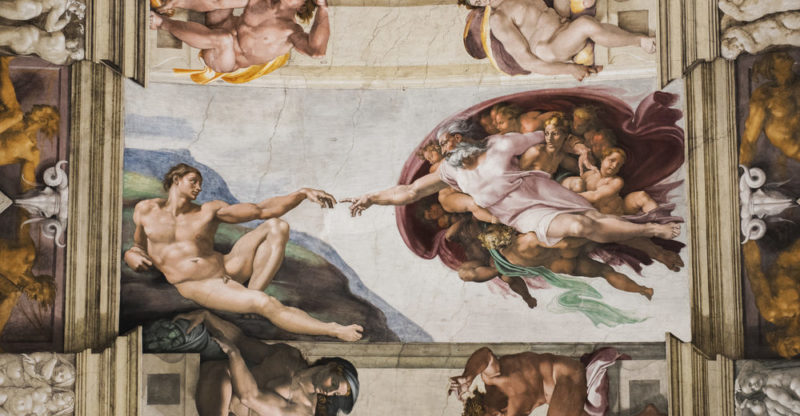 The vault of the Sistine Chapel was completed in four years.

Michelangelo started painting when he was only twelve years old , when he finished his Tormento de San Antonio .

The genius of the artist could already be seen in this early work, which would reach its greatest heights with the Tondo Doni in Florence between 1504 and 1505, a representation of the Holy Family, against a background in which the various stages in the history of The humanity.

However, Michelangelo’s masterpiece in terms of painting was the fresco design for the Vault of the Sistine Chapel : a project that began in 1508 and was completed four years later.

It is a fresco of colossal proportions, sticking to the shape of the vault , in which he painted nine scenes of biblical genesis, with the presence of the prophets, the sibyls and four ignudi (naked youths).

This colossal masterpiece was completed in 1512 despite financial setbacks for the artist, frequent pressure from the Pope, and the fact that Michelangelo painted it entirely on his own.

Many of the scenes in this painting have been used in numerous performances and are at the heart of European Renaissance culture. 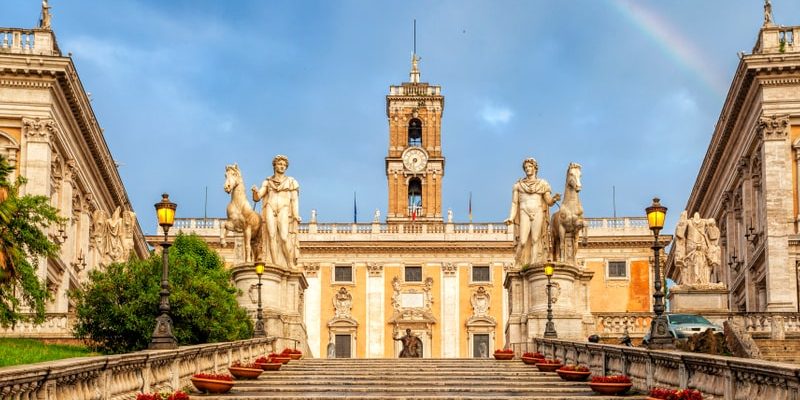 The Capitol Square was rebuilt by Michelangelo.

Among these works are the façade of San Lorenzo (begun in 1420 and unfinished in 1518 when it was taken over by the artist), the improvements to the Medici Riccardi palace in 1517.

In Florence, he was in charge of the renovations of the Laurentian Library undertaken in 1533 under the mandate of Pope Clement VII and in the Vatican the design of the Basilica of San Pedro.

Also, in the reconstruction of the Capitol Square , Michelangelo varied its façade so that instead of the Roman Forum, it pointed towards the new center of power: Saint Peter’s Basilica.

Drawings and designs by Michelangelo 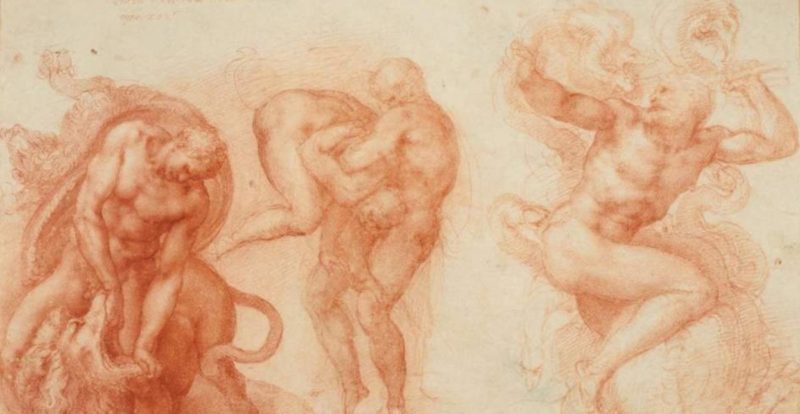 Michelangelo burned many of his sketches and drawings.

Michelangelo also made a diverse set of drawings, which are held to be incomplete masterpieces , since the artist himself burned numerous sketches and drawings in bonfires lit by himself.

Among them stands out “The Battle of Cascina” , inspired by a chronicle by Filippo Villani, which shows the troops of Florence in combat with those of Pisa.

Also famous are the preparatory drawings for the fortification of Florence , when Michelangelo was appointed “governor and procurator general of fortifications”, after the expulsion of the Medici in 1527.

Michelangelo also ventured into poetry , leaving some three hundred compositions in which sonnets and madrigals abound , influenced by the work of Petrarch and, eventually, with satirical and humorous outlets.

Of the set, the poems dedicated to his platonic love for Vittoria Colonna stand out , of a marked religious and mystical nature, since they shared those concerns. 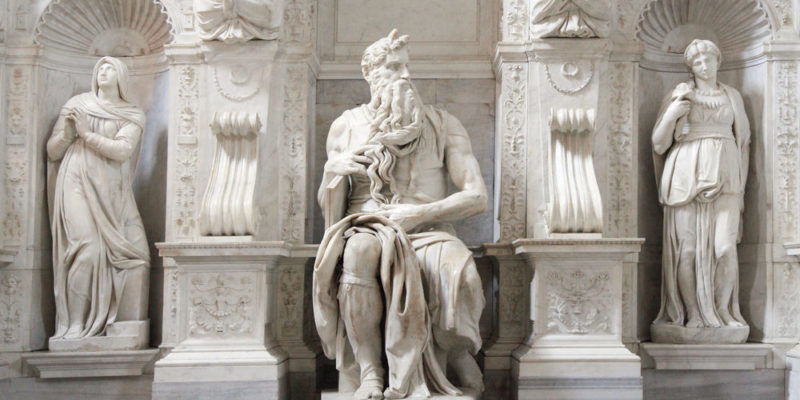 Michelangelo was called by his followers as El Divino.

Michelangelo was the first Western artist to have two biographies published during his lifetime , in 1550 and 1553, one by Giorgio Vasari and the other by a disciple of his, Ascanio Condivi.

His contemporaries greatly admired him and called him the divine .

His name also appears in the Calendar of the Lutheran Saints , it was given to an asteroid discovered in 1982 and to a crater on the planet Mercury . Numerous streets, squares and avenues pay homage to him throughout the world.

Michelangelo died in Rome in 1564 , without seeing many of his works of the last period completed, and was buried in Florence according to his will.

His tomb exhibits a sublime work by a disciple of his , Giorgio Vasari, designed in 1570.