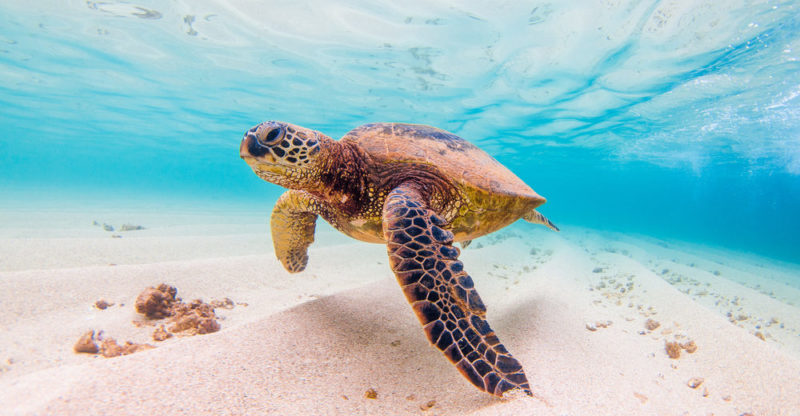 What is the Pacific Ocean?

Where is the Pacific Ocean located?

Expanse of the Pacific Ocean

Flora and fauna of the Pacific Ocean

The Belt of Fire

We explain what the Pacific Ocean is, how much it extends and what its flora and fauna are like. Also, what are its characteristics, climate and more.

What is the Pacific Ocean?

We call the Pacific Ocean or Great Ocean the largest, deepest and most violent of the planet’s oceans . Its name is attributed to Fernando de Magallanes, who found its waters very peaceful . However, the name assigned by the first European to contemplate its waters in 1513, the Spanish explorer Vasco Núñez de Balboa, was “Mar del Sur”.

The Pacific Ocean is often found, in western world maps, relegated to the edges of the map, unlike the Atlantic, which is a much more central ocean in our imagination. Contrary to its name, it is located in a highly dangerous region, where earthquakes , volcanic eruptions, typhoons and hurricanes are frequent .

This great ocean is divided into two:

Where is the Pacific Ocean located?

The Pacific is located in the intermediate space between the coasts of America , Asia and Oceania . Its waters are part of the territory of 53 different countries.

In addition, it borders the Arctic Ocean (and the Bering Sea) to the north and Antarctica (and the Ross Sea) to the south.

Expanse of the Pacific Ocean 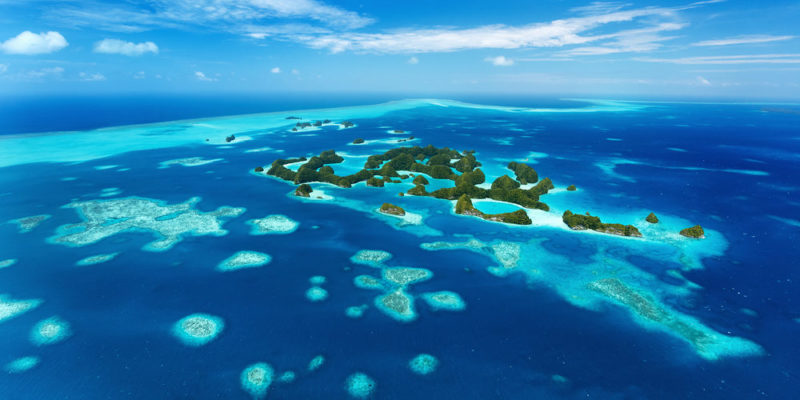 The extension of the Pacific is 15,000 kilometers from North to South . It reaches its greatest width (19,800 km) at 5 degrees north latitude, that is, between Indonesia and the Colombian coasts.

It covers a total area of 155,557,000 square kilometers , which is equivalent to one third of the planet Earth . In addition, the waters of the Pacific represent 43% of the planet’s water: some 169.2 million cubic kilometers of salt water.

The density of oceanic water is closely related to its salinity level , which varies in the case of the Pacific depending on its latitude.

The waters near the equator are less brackish due to the frequent rainfall in that area. On the other hand, they are also less brackish in the polar regions due to their little evaporation . The mean salinity of the Pacific is 32.5% (about 34 grams per liter).

Flora and fauna of the Pacific Ocean 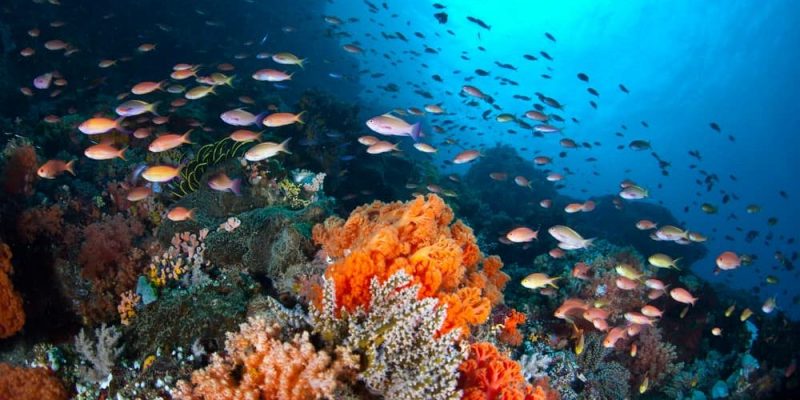 The Pacific is an important source of fish for the fishing industry.

The greatest biological wealth of the Pacific Ocean is centered on its margins, where the flow of currents maintains a great diversity of animal and plant species . Especially the large coral reefs are veritable explosions of ocean life.

Marine life ranges depending on depth, from plankton on the surface to large predators like sharks . There are even species adapted to life in the deep ocean, where there is no light and the pressure is overwhelming.

The Pacific is an important source of fish for the fishing industry , such as anchovy or anchovy, highly demanded in the world.

The waters near the pole , on the other hand, are home to marine life adapted to the frozen environment, such as seals , walruses, killer whales , and whales . The latter are under ecological protection as hunters from Asia (especially Japan ) and Chile have hunted them for decades for their valuable oil.

In the Pacific zone there are five well differentiated climatic regions: 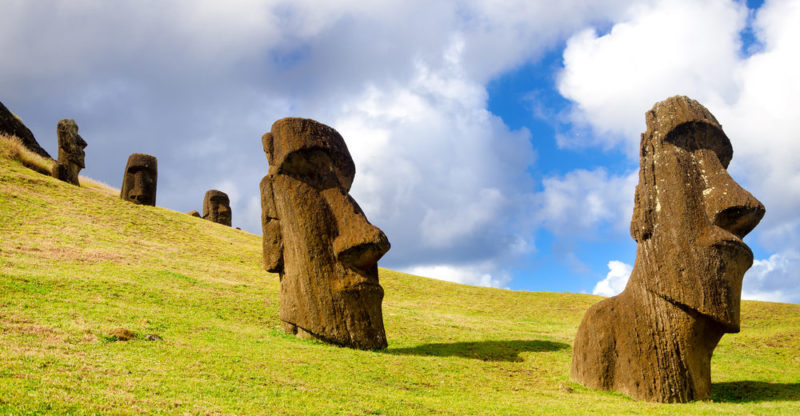 Easter Island is part of Polynesia, although it belongs to Chile.

The Pacific has thousands of different islands, most of them belonging to Oceania, grouped into three distinctive regions:

In addition, there are other islands that are not part of this continent, such as:

It is known as the Mariana Trench to the deepest known part of all the world’s oceans , located in the western Pacific, near the Mariana Islands and Guam. It has the shape of a scar or crescent, extending along 2,550 km of the earth’s crust and reaching 69 km in width.

Its maximum known depth is 11,034 meters , meaning that if Mount Everest were to fall standing upright in the Mariana Trench, its peak would remain 1.6 km below the water level. 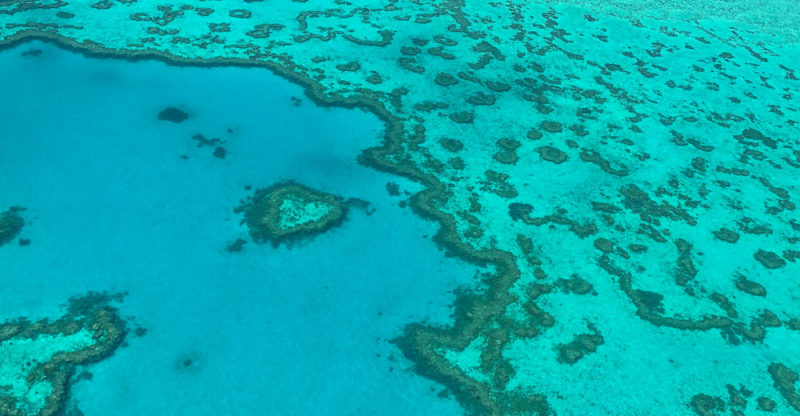 This is the name of the world’s largest coral reef system , located off the northeast coast of Australia in the Coral Sea . Although its exact extension is indecipherable, it is estimated that it stretches over 2,600 kilometers.

It is made up of more than 2000 different coral reefs and some almost 1000 islands. Its magnitude is such that it is appreciable from space and contains one of the largest agglomerations of biodiversity in the world. For this reason, it has been declared a World Heritage Site by UNESCO in 1981 .

The Belt of Fire 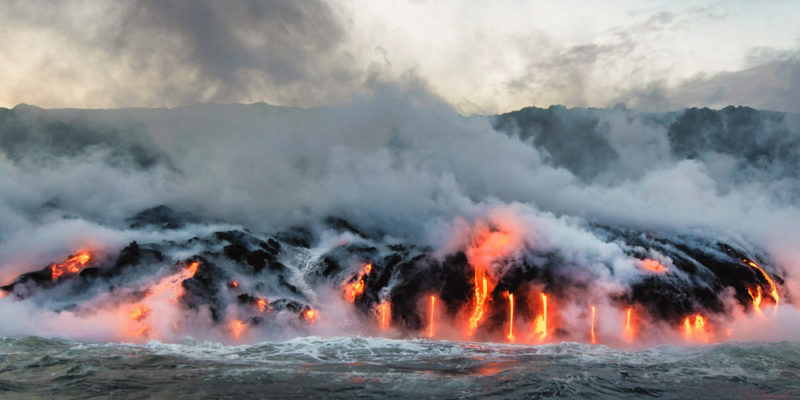 The Ring of Fire is home to 452 volcanoes.

Also called the “Pacific Ring of Fire”, it is a region of the Pacific basin that is home to some of the largest volcanoes and supervolcanoes on the planet.

In addition, the most intense seismic activities are recorded there , in a horseshoe-shaped pattern along 40,000 km of coasts in South, Central and North America, Russia, Japan, China, Korea, Asia Minor and Oceania .

452 volcanoes are concentrated in this area (75% of the world’s active and inactive volcanoes) and 80% of the planet’s earthquakes take place there.

Also known as the “North Pacific Current”, it is a slow warm water current that flows from west to east of the Pacific Ocean between the 40th and 50th parallel.

It is caused by the collision of the Kuro Shio current , which runs north from the Japanese coast, with the Oya Shio current, which flows south from almost the Arctic, in an opposite clockwise direction. This is one of the main ocean currents in the Pacific Ocean.