The real numbers are the set that includes the natural, integer, rational and irrational numbers . It is represented by the letter ?.

The word real is used to distinguish these numbers from the imaginary number i , which is equal to the square root of -1, or ?-1. This expression is used to simplify the mathematical interpretation of effects such as electrical phenomena.

All real numbers have an order:

In the case of fractions and decimals:

The integrity characteristic of real numbers is that there are no empty spaces in this set of numbers. This means that each set that has an upper limit has a smaller limit.

Irrational and rational numbers are infinitely numerous, that is, they have no end, either on the positive or negative side.

A real number is a quantity that can be expressed as an infinite decimal expansion. They are used in measurements of continuous quantities, such as length and time.

Each real number can be written as a decimal. Irrational numbers have endless and unrepeatable decimal places, for example, the number pi ? is approximately 3.14159265358979 ... 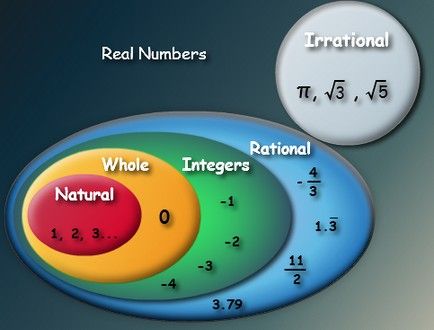 Sets of the real numbers.

Natural numbers arose from the need to count objects. These are the numbers we are most comfortable with: 1, 2, 3, 4, 5, 6, ... to infinity. The set of natural numbers is designated by the capital letter N .

Natural numbers help us to tell how many classmates we have in class, the number of flowers in a bouquet, and the number of books in a library.

The set of whole numbers includes the natural numbers and their symmetric numbers. This includes positive integers, zero, and negative integers. Negative numbers are denoted by a “minus” sign (-). It is designated by the capital letter Z and is represented as:

A symmetric number is one that added with its corresponding natural number gives zero. That is, the symmetric of n is -n , since:

Integers are used to:

Irrational numbers comprise numbers that cannot be expressed as integer division in which the denominator is nonzero. It is represented by the capital letter I .

Those quantities that cannot be expressed in whole form or as a fraction that are incommensurable are also irrational. For example, the ratio of the circumference to the diameter the number ? = 3.141592…

The roots that cannot be expressed exactly by any whole or fractional number are irrational numbers:

The discovery of real numbers is attributed to the Greek mathematician Pythagoras. For him there was no rational number whose square is two:

So the ancient Greeks saw the need to call these irrational numbers .