Which is better: Fitbit Charge 5 or Inspire 2? 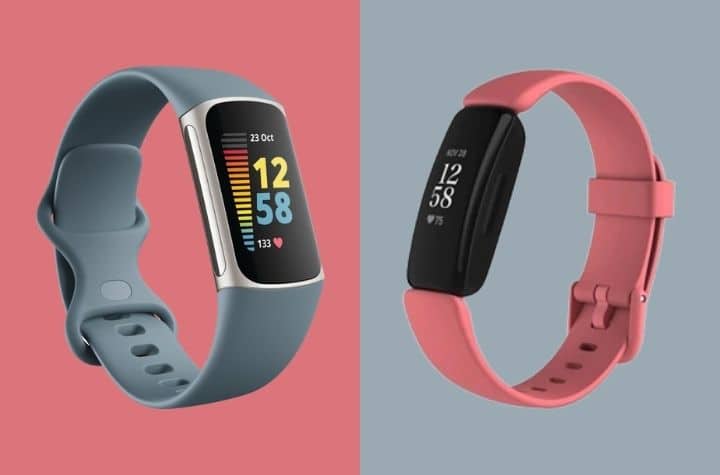 Introduce yourself to the fitness trackers.

Activity trackers are an indispensable tool for everyone serious about their health and fitness. These cutting-edge timepieces make it easier for you to achieve your activity objectives and boost your overall health at the same time. The Fitbit Charge 5 and the Fitbit Inspire 2 have both been evaluated and compared.

When it comes to Fitbit, the company offers a variety of trackers, each of which contributes to your health and fitness in some way. Fitbit versions are both inexpensive and high-end, guaranteeing that customers with every kind of budget can find something suitable. Fitbit has a wide variety of models, so it doesn’t matter if you’re looking for a tracker with many features or one with fewer bells and whistles.

The Fitbit Charge 5 and the Fitbit Inspire 2 track steps and calories, but how do they vary?

Introduce yourself to the fitness trackers.

Both the Fitbit Charge 5 and the Fitbit Inspire 2 will be discussed in this brief overview.

The Fitbit Charge 5 is the most recent addition to the Charge line of fitness trackers, and it is a watch that delivers a powerful punch. This new option incorporates several significant modifications to the architecture of the Charge 4, and as a result, it offers superior trackers, health data, and advanced sensors.

The Charge 5 has many cutting-edge features, including an EDA and ECG sensor, an AMOLED display, and an internal GPS receiver.

Although the Fitbit Inspire 2 is not as well-known as other models from the brand (such as the Sense and Versa lines, for example), this fitness tracker is not to be disregarded in any way! This option won’t break the bank and makes data on users’ health and fitness available to everyone.

Even though this is an entry-level fitness tracker, it is still more trustworthy than other brands, and it is a very popular choice among people who have never used a fitness tracker before.

What are the most notable distinctions between these two watches, even though they share several characteristics in common? Determine which watch provides the features and services that are most beneficial to your way of life.

These fitness trackers each have unique features, and their designs are rather distinct from one another. When shopping for a fitness tracker, the design may not necessarily be the most important consideration; however, it is critical to remember that you will be wearing the tracker regularly.

The Charge 5 is thicker and larger than the Fitbit Inspire 2, which is thinner and more compact. This is an excellent idea for you if you have been seeking a fitness tracker that is extremely lightweight and comfortable to wear; in fact, it is so light that you can even use it while you are sleeping.

Rose, white, and black are the three color possibilities for the Inspire 2, and extra silicone bands can be purchased online. Additionally, the Inspire 2 comes with a variety of color options. Because it has a clip, this fitness tracker may also be worn as an accessory, so you can keep track of your workouts in complete secrecy if you so want.

The aluminum case of the Fitbit Charge 5 is designed to be more robust. The tracker’s aesthetic appeal is improved due to this and the silicone band it comes with. This tracker is also water-resistant to a depth of five ATMs, making it ideal for anyone who enjoys going swimming.

The Charge 5, in contrast to the Inspire 2, has a contemporary AMOLED touchscreen that displays full-color images. This also includes an “always-on” mode, making it a more advanced tracker than the Inspire 2, which has one setting. For the Charge 5 model, you can select the band’s color and the band itself.

Both of the watches can monitor the distance traveled, the number of steps taken, the number of calories burnt, and give warnings when there has been a period of inactivity. Both watches also come equipped with optical heart rate monitors that will provide you with accurate statistics at all hours of the day and night.

Users of the Fitbit Inspire 2 have access to over 20 different activity modes that are centered on achieving specific goals. These include not only strolling but also jogging, cycling, and swimming as well. You may also find out your cardiac fitness levels and the number of minutes you spent in the active zone, and you have access to activity maps.

In addition to the other premium services, the Charge 5 provides access to all of these health and fitness capabilities. Users of the tracker are also provided with daily readiness scores that indicate whether or not they should engage in physical activity. You may also get data from the built-in GPS and altimeter for any activities that take place outside. Additional ECG sensors, SpO2 sensors, and other types of sensors can be found on Charge 5.

Tracking one’s sleep is another advantage provided by both of these trackers. Both trackers have excellent sensors, but Fitbit sleep tracking is significantly more advanced than other competitors. Both can provide:

On the other hand, some of this information can only be accessed with a Fitbit premium subscription.

It is important for readers to be aware that the Charge 5 can offer users additional SpO2 data during the night, which can indicate health problems; nevertheless, other than this difference, both trackers have the same ability to track sleep.

There is a significant gap between the costs of these two Fitbit alternatives. Both wristwatches come equipped with a diverse selection of features, which causes their respective prices to vary.

At $99, the Fitbit Inspire 2 has the most affordable pricing point among all of Fitbit’s offerings. This watch is perfect for anyone interested in trying out fitness trackers for the first time or those looking for an affordable alternative. The fact that fitness trackers from other brands can be purchased for even less money is the only criticism many people have regarding the Fitbit Inspire 2.

On the other hand, the Fitbit Charge 5 can be purchased for roughly $179.99, a significant increase over the Fitbit Inspire 2. However, considering that this is the most advanced fitness tracker that the company has and that it comes equipped with more intricate functions, you will find that it costs more.

The following is a list of other smartwatch characteristics that will assist you in selecting the activity tracker that is ideal for you.

You should investigate the Fitbit brand if you are looking for a good fitness tracker. Their collection includes a wide variety of watches that are suitable for a wide variety of lifestyles. When comparing the Charge 5 to the Inspire 2, if you want a simpler and more economical watch, our recommendation is to go with the Inspire 2. On the other hand, if you are going to spend more money on a tracker, the Charge 5 would be a better choice for you to consider purchasing.