What Was The May Revolution? Know Its Top 10 Features and Characteristics 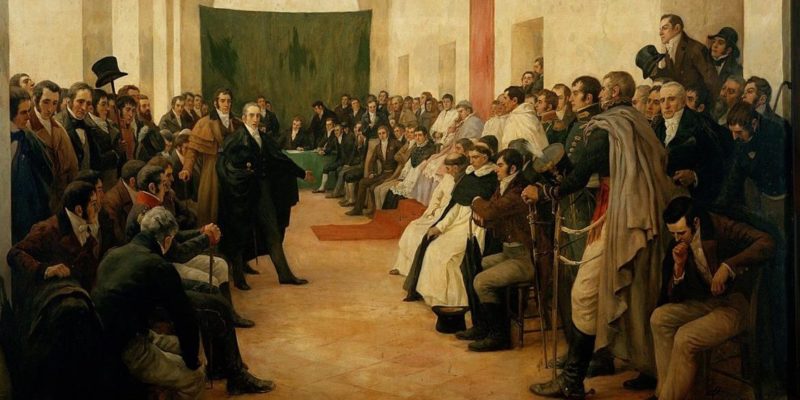 What was the May Revolution?

Characteristics of the May Revolution :

The change of throne as an excuse

The "Week of May"

Opposition to the First Board

The territorial fracture of the Viceroyalty

Part of a continental feeling

We explain what the May Revolution is, the main events and characters, and what its general characteristics are.

What was the May Revolution?

The May Revolution was a set of historical events that occurred during the month of May 1810 in the city of Buenos Aires , then the capital of the Viceroyalty of the Río de la Plata, one of the four that the Spanish Crown maintained as a form of government . of its American colonies.

The events of the May Revolution occurred within the framework of the deposition of King Ferdinand VII by Napoleonic forces who gained control of Spain , whose place was taken by the French conqueror’s own brother, Joseph Bonaparte . They had as a consequence the deposition of the Spanish Viceroy Baltasar Hidalgo de Cisneros , as well as the Central Supreme Board as a political entity to which the viceroyalty responded.

The May Revolution, for this reason, is considered the beginning of the Argentine independence process and the formal emergence of the first Argentine State . The full declaration of independence would take place years later, during the Congress of Tucumán in 1816.

Next, and as a summary of the revolution, we present the main characteristics.

Characteristics of the May Revolution :

The change of throne as an excuse

Like that of other Spanish colonies in America , the Creole population of Buenos Aires resented the political and economic organization of the colonial system , which widely and shamelessly favored peninsular Spain.

Inspired by the declaration of independence of the United States in 1776 and by the revolutionary discontent that was already taking shape in Upper Peru and in the Captaincy General of Venezuela , and further strengthened by their success in repelling the English invasions, they soon considered deposition . of Fernando VII as the ideal situation to announce his disobedience to the new mandate. A gesture that would give way to emancipation a while later.

The “Week of May” 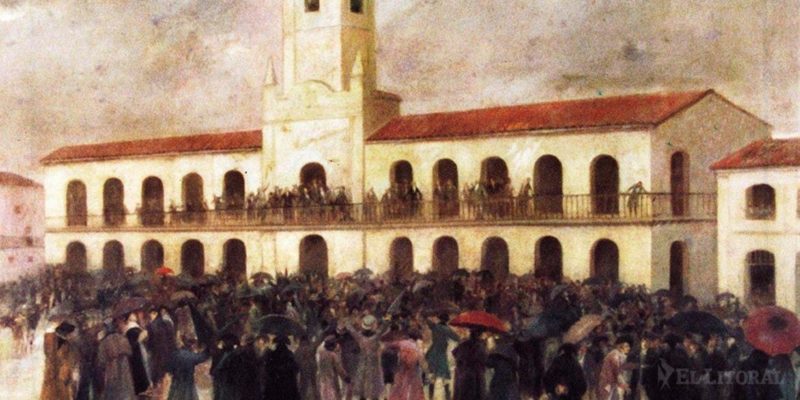 The Cabildo of the 22nd was to designate a new political authority.

These events took place over a week, the Week of May, whose beginning is established by the fall of the Central Supreme Board on the 18th , and whose end is marked by the rise of the First Board on May 25.

On the 19th, the Viceroy was asked for an open Cabildo to discuss the appointment of a new political authority , since the Spanish government was considered headless and therefore his position illegitimate.

Said council was summoned for the 22nd , after verifying the Viceroy that the militias had also disobeyed him. The members of the Cabildo, thus, assumed authority during the appointment of a governing board, which was announced on the 24th and was made up of Cornelio Saavedra, Juan José Castelli and, paradoxically, the Viceroy himself.

In the face of growing popular discontent, however, the latter presented his resignation the following day and thus the Provisional Governing Board of the capital of the Río de la Plata was elected.

Opposition to the First Board 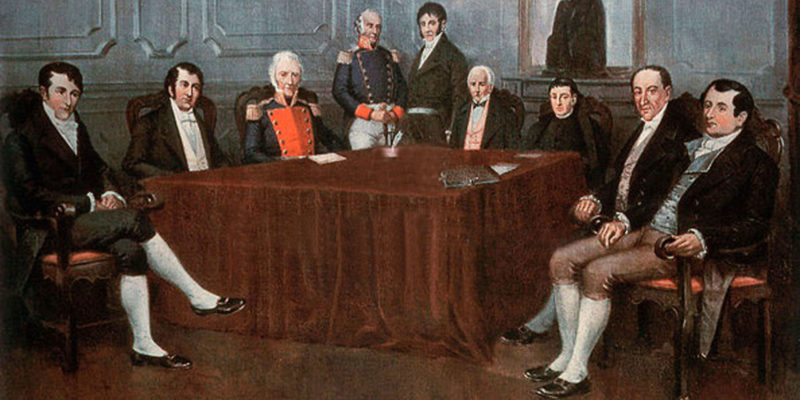 The appearance of the Primera Junta was not unanimously celebrated by the Viceroyalty.

Although the independence expressed the discontent of broad sectors of the criollos , the appearance of the Primera Junta was not unanimously celebrated by the Viceroyalty.

In Córdoba, the former viceroy Santiago de Liniers, hero of the resistance to the English, began a counterrevolutionary movement that militarily resisted the troops of the First Junta , when they tried to have their sovereignty recognized in the territory of the former viceroyalty. The counterrevolution was short-lived, however, and culminated in the execution of Liniers.

Similarly, the criollos of Mendoza were reluctant to the new order , and the people of Salta argued at length about the convenience of the project. Montevideo, Paraguay and Upper Peru were also particularly and actively resistant.

The precepts of the French Revolution of 1789, which led to the overthrow of the monarchy and the declaration of the universal rights of man, under the precept of Liberty, Equality and Fraternity, played a prominent role in the political imaginary of the American colonies, inspiring them the possibility of a radical change of social and political paradigms.

On the other hand, the support of Great Britain, to whom the Hispano-American emancipation was convenient to satisfy its industrial demands for raw materials , often tilted the balance of independence in favor of the Creoles, despite the fact that years before they had unsuccessfully tried to invade the Río de Silver twice.

The Spanish monarchy , on the other hand, tried to resist the winds of change through the promulgation of the Supreme Junta of Spain and the Indies , and after its failure and disobedience on the part of the revolutionaries, it proposed the Regency Council of Spain and the Indies, as a way of guaranteeing the bureaucratic and political dependency of the colonies with respect to the metropolis.

These initiatives failed miserably and were later replaced by the military placation that led to the numerous American Wars of Independence. 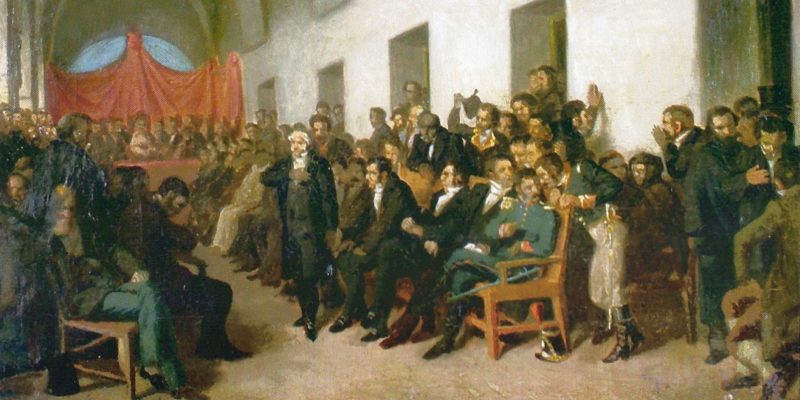 Most of the priests and friars were favorable to the new order.

The role of the clergy in this conflict was ambiguous, since the official position of the American church was one of condemnation of the revolutionaries and loyalty to the monarchical order , going so far as to qualify the insurgents as heretics. Especially in the territories of Upper Peru, where the ecclesiastical leaders played an important role in the adherence of the peoples to the royalist system.

In fact, during the Week of May , Bishop Benito Lué had insisted on the permanence of Viceroy Cisneros in the upcoming Government Juntas.

However, most priests and friars were favorable to the new order , and the revolutionaries continually insisted on conciliatory policies in religious matters, perhaps recognizing the influence of the Church in the culture of colonial America as a decisive human factor.

Although the republican and democratic ideals were not immediately implemented by the new order of government, the profound change in pattern that the abolition of the Viceroyalty meant, whose authorities were designated by Spain, must be taken into account.

The implementation of a government that responded to the common good, that is, to an early idea of popular sovereignty and self-determination of peoples , meant that the colony for the first time would choose its rulers taking into account their interests and not those of the metropolis. European.

A first step towards the independence scenario, which would later turn into the internal conflict to determine the form of autonomous government to implement.

The territorial fracture of the Viceroyalty

Another important consequence of the May Revolution was the atomization of the territory of the brief Viceroyalty of the Río de la Plata , into a more or less disparate set of provinces, which, once freed from the Spanish political yoke, began a process of distancing, particularly noticeable in the populations of Upper Peru, Paraguay and Montevideo.

This in turn would lay the groundwork for future military and territorial conflicts , once independence had been achieved. 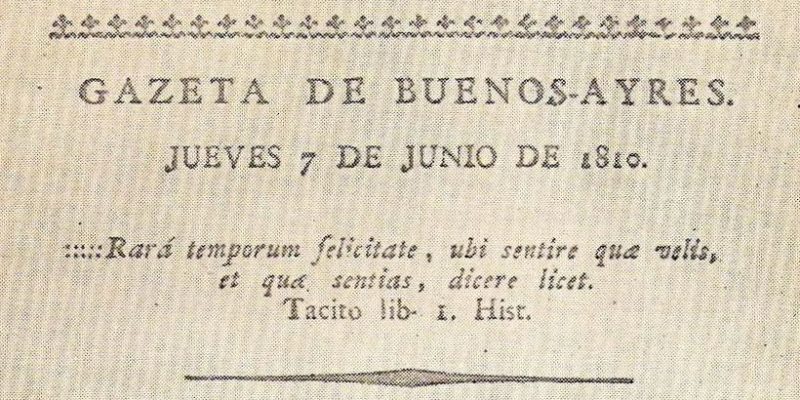 The Gazeta de Buenos Aires was one of the newspapers that saw light in the Revolution.

Once Spain’s political control over the Río de la Plata was lifted, the revolutionaries embraced freedom of the press and periodicals flourished , often satirical and feuilleton, but also in the field of newspapers . La Gazeta de Buenos Aires , El Grito del Sud, El Correo de Comercio, El Independiente, La Lira Argentina and others saw the light in that period.

Part of a continental feeling

The May Revolution coincides in dates with movements of a similar magnitude throughout colonial America, such as the Juntas of Mexico and Montevideo (1808); Quito and La Paz (1809) ; Caracas, Cartagena, Cali, Santa Fe (New Granada) and Chile (1810); Paraguay, Tacna, San Salvador (1811) and Cuzco (1814).

Collectively they are known as the American Autonomous Boards.