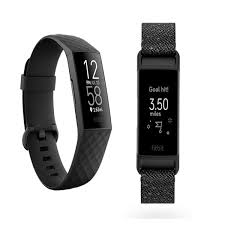 2. Go over the daily activity goals you set for yourself

5. Keep a record of the foods you eat

6. Review your history of physical activity

7. The Synchronization of Data

9. You don't have to own a Fitbit tracker to keep track of your activity

10. The Fitbit Coach is available to assist you

11. Xbox One consoles are compatible with Fitbit devices

12. You and your pals can compete against one another in a Fitbit challenge

13. Choose between participating in solo challenges or going on Fitbit trips

14. Fitbit has its very own social networking platform

The Fitbit app is actually the star of the show, even though your Fitbit can monitor your activity around the clock.

Consider this location as a hub where you can monitor trends, make adjustments to your objectives, and gain useful insight into your actions. All of your data is stored here. Every Fitbit device, including the Sense, Charge 4, Versa 3, Charge 5, and even more basic models like the Inspire 2, may connect to the same app. Depending on the tracker you use, you can see a different amount of information.

Fitbits are well-known for their ability to monitor your steps and your workouts, and your sleep patterns. However, there is more to these gadgets and apps than you would initially realize.

We are going to go over how to access the eight key areas of the Fitbit app, which range from monitoring your statistics to documenting your nutrition and some of the more hidden possibilities that are available. Then, we will demonstrate seven uses for it that you most likely were not aware of.

The Today view is essentially just a dashboard that allows you to go through all of the information that your tracker has gathered. You have the ability to rearrange the way in which these individual pieces of data are displayed. In addition to that, it includes the goals for measuring your daily activities. These include the number of steps walked, the number of floors climbed, the distance traveled, the number of calories expended, the number of active minutes spent, and a few additional factors, including weight, heart rate, and sleep.

2. Go over the daily activity goals you set for yourself

When you first create a Fitbit account, you will be prompted to select your goals. These goals will allow you to make adjustments to your Activity, Exercise, Nutrition & Body, and Sleep tracking. Because your objectives are likely to shift over time, Fitbit gives you the ability to modify them whenever you choose.

Your VO2 Max is determined by Fitbit using their Cardio Fitness Score. This is, in essence, the maximum quantity of oxygen that your body is capable of absorbing when you are engaging in physical activity. It is expressed as a round number that ranges from “Excellent” to “Poor,” depending on your age and gender.

According to Fitbit, this score is determined by your resting heart rate as well as your user profile, and the company claims that the score will get more accurate the longer you wear your Fitbit so that it can learn.

Overnight, while you sleep, the optical heart rate monitor from Fitbit utilizes a red LED to determine the percentage of oxygen that is present in the blood. Instead of displaying this information as a single percentage, the Estimated Oxygen Variation (EOV) takes into account the difference between the highs and lows of your blood oxygen levels and seeks to identify any underlying problems.

5. Keep a record of the foods you eat

6. Review your history of physical activity

Your activity log includes everything that was tracked and synchronized with your Fitbit device. Including every run, walk, swim, and other activities. A registered workout will expand into a detailed display when you tap on it. This display will include information such as your heart rate as well as other data.

7. The Synchronization of Data

While you go about your day wearing your Fitbit, the device records and stores all of the data you collect until you sync it with your smartphone via the Fitbit app. You have the option to select ‘All-Day Sync,’ which means that your Fitbit will automatically sync whenever your phone is within range throughout the day. However, you also have the option to sync manually whenever you want to use the app.

Simple ranges of beats per minute that are lower than your maximum heart rate constitute what is known as heart rate zones.

After determining your maximum heart rate, Fitbit will provide you with three easy-to-understand heart rate zones to follow. Each one corresponds to a unique intensity level (or percentage of your maximal heart rate), which activates a different energy system within the body and results in a unique set of positive effects. The operation is as follows:

If you want to create a zone that is unique to your organization, you can do so under the “HR Zones” settings section of your account profile. Choose the “Custom Zone” option, and then type in the upper and lower limits that you want.

It would be best if you now had a better understanding of the fundamentals; the following are six elements of the Fitbit app that the vast majority of users are unaware of.

9. You don’t have to own a Fitbit tracker to keep track of your activity

We are thrilled that there are no hidden costs associated with downloading the software. It only demands that you always have your smartphone on you, which is something that the vast majority of people already do.

Despite this, it does not have some of the more advanced features that are available on Fitbit devices, such as tracking your heart rate. In addition, it cannot be utilized for water-based activities such as swimming, although a Fitbit that is waterproof may.

For their own personal reasons, there are some individuals who do not own a Fitbit tracker. It’s possible that they have no interest in technology and don’t see the point in spending the money on it. Both the official Fitbit app, which can be installed on any smartphone, and the Fitbit wrist trackers are responsible for recording a user’s step count.

10. The Fitbit Coach is available to assist you

The Fitbit Coach is a video streaming platform that features an ever-expanding library of instructional videos designed to cater to a wide range of fitness levels and a wide range of fitness interests. The Fitbit Coach is different from other fitness programs because it provides a variety of fast activities to choose from. These workouts are included in playlists and chosen for you based on your current fitness and energy level. The Fitbit Coach app uses the same Fitbit account as the other Fitbit applications, so all of the apps’ data may be synchronized with one another.

This is a great approach to introducing a range of training regimens, particularly if your only form of exercise is walking or running. Although there are many free workouts available, a membership is required to access the vast majority of the site’s material.

11. Xbox One consoles are compatible with Fitbit devices

This simple solution allows you to view the facts about your fitness on a more substantial screen. However, you are unable to connect to the Fitbit device that you are using. For this, you will need a mobile device such as a smartphone or tablet or a computer running Windows 10. The official Fitbit app for Microsoft Xbox may be obtained by downloading it and opening it. To locate the app, navigate to the Store section of the dashboard and perform a search for Fitbit. Easy.

The Fitbit app may be downloaded on Xbox One, Xbox One S, and Xbox One X video game consoles manufactured and sold by Microsoft.

12. You and your pals can compete against one another in a Fitbit challenge

It is possible for the start time and the end time to be unclear when participants are in different time zones. Nevertheless, Fitbit Challenges enhances your experience by doing exercise more like a game and giving you the opportunity to compete against your friends on daily or weekly leaderboards. In addition, users can compete with one another to see who can walk the most steps in a day or reach their daily goal first. Each player’s progress is recorded on a scoreboard for the entirety of the competition, and any and all participants are free to offer feedback on its contents at any time.

Any Fitbit app or device may be used to track your progress in a Fitbit Challenge and start a new one. After opening the application, navigate to the Challenges tab and scroll all the way down until you reach the bottom of the page to begin a challenge with your friends.

13. Choose between participating in solo challenges or going on Fitbit trips

A sense of progression and an eventual goal, such as trivia, can be conveyed through the use of steps depicted on a map at various location points along with the race.

Or, if you don’t feel like competing with other people, you may always go on a solo adventure!

Participants compete against one another by racing around a 3D map of real-world sites such as New York City and Yosemite rather than on traditional leaderboards. When you use your Fitbit to register one thousand steps in the real world, the app will advance you one thousand steps on the virtual racetrack.

14. Fitbit has its very own social networking platform

Your friends are the only people who can see the content that you publish on the feed; this is perfect if you do not want your actions to be made public.

It is simple to overlook the social element of the Fitbit app because it is hidden away in the Community option rather than being displayed on the primary dashboard.

The social aspects of Fitbit, like a friends list and scoreboards, have always been available. The social feed is a newer feature that may be foreign to users who have been using the platform for a longer period of time because it may be accessible under the page labeled Community.

On this feed, you may publish your Fitbit activity exactly like you would on Facebook or Twitter, such as the number of steps you’ve taken or the badges you’ve unlocked. The posts of one another’s friends can be commented on, and friends can encourage and help one another to maintain a quick connection (similar to liking on Facebook).