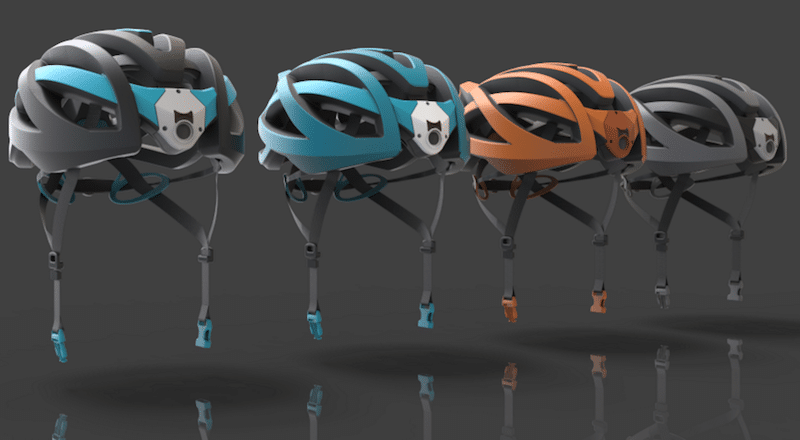 Smart bike helmets distinguish themselves from other wearables by operating in any weather and always remaining comfortable. A revolutionary dual camera helmet makes it possible to record and transmit fantastic content while remaining even safer on the road.

The first cycling helmet with integrated front and rear cameras is the Cyclevision EDGE. The two cameras work together to simultaneously record 160-degree, 1920 x 1080 pixel video and store it in two 32GB on-board memory cards. This is sufficient for about 4.5 hours of video. The helmet will automatically begin overwriting the oldest video as the storage space fills up. Wearers only need to plug the device into a USB port in order to download the video to a computer.

More importantly, you can stream live video to your smartphone thanks to the app and WiFi compatibility. This means your phone can serve as a rear-view mirror if you mount it to the handlebars.

This gives you a greater view than cameras connected to a bike frame because the cameras are attached to your helmet. The cameras are recording everywhere you turn. Additionally, you don’t have to go to the trouble of taking your camera out of your bicycle’s frame when you leave it.

Rob Asker, the startup’s founder and CEO from Australia, claims he had the concept after being involved in not one, but two hit-and-run accidents a few years prior.

“We’re passionate about rider safety, and we look forward to bringing the Cyclevision EDGE helmet to the cycling community,” adds Asker. “Not only will it make road cycling safer, but it will also serve as a tool to record their commuting and recreational cycling experiences.”

We can add new features as we advance by just updating the software because it is app-based.

A 3,200-mAh battery with a 2.5-hour runtime powers the inventive helmet. However, this can be increased by incorporating a power bank.

Cyclevision is attempting to gather about $80,000 since it launched on Kickstarter earlier this week. Although there are still 26 days left, the project has so far raised about $10,000.