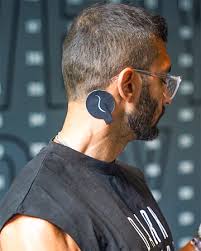 Review of the FeelZing Energy Patch: Instructions for Use

A look at the FeelZing Energy Patch with the question: Does It Work

The conclusion of the review of the FeelZing Energy Patch

FeelZing is an energy patch that, in addition to giving you more energy, is also supposed to improve your attention. You can use the neurostimulation device for anything that requires concentrated effort, like working, learning, playing sports, or pretty much anything else.

Thync Global provided this item. The company has been operational for more than a decade at this point, and it was first founded by a group that included neuroscientists, engineers, and businesspeople. They are the people who are responsible for several neurostimulation devices, such as Thync Edition 1 and Relax Pro. The first one was published in 2015, and the second one came out after two years had passed. Both were developed with the intention of assisting users in attaining a condition that is more serene and quiet.

The first version of the device, which was Star Trek inspired, was worn on the forehead and resembled an eye patch. It did its job by establishing a connection with the supplementary app and sending waveforms to the user’s head. Using electrode pads that were disposable, the second version of the device operated on the back of the patient’s neck. The use of moderate nerve stimulation achieved stress alleviation by employing low-level electrical stimulation patterns, which Thync Relax Pro applied. Both neurostimulation systems were well received and boasted a combined user base of over 10,000 people.

Now the company based in California is working on a new product, and this one is just as original as the last one they developed. The FeelZing Energy Patch was under development for around five years before it was released. Simply put, this is a neurostimulation device that is designed for use in a laboratory setting. It is in the form of a one-time use patch about the size of a silver dollar.

Review of the FeelZing Energy Patch: Instructions for Use

The convenience of this device lies in the fact that it does not require charging and does not require a smartphone app, Bluetooth connection, or WiFi connection. It operates quite well on its own. You get two uses out of each patch, and you may decide whether you want the regular or the extra-strength version.

You might think of it as a way to enhance your focus and energy without the use of coffee. The non-allergic cotton cover of the 52mm patch is affixed to a smart circuit, which rests on a hydrogel and flex base. The patch also includes a flex base and a hydrogel base.

I used both the standard and the enhanced version of the patch. Thync claims that the effects of the different strength varieties differ from person to person, despite the fact that the extra strength variant is highly potent.

FeelZing is really straightforward to use. Take the patch out of its package and pull the tab to activate the mechanism inside. Check to see that the space behind your ear is tidy. You can now remove the release film and adhere the patch directly behind the ear and in the space between the hairline. The mastoid is the name given to this region.

Check that there are no stray hairs in the way, and apply a little bit of pressure to the patch so that it stays securely in place. The glue will keep it in place; when removed, it will not leave any residue. The patch application takes considerably less than one minute to complete.

What is going to follow is a time of stimulation, during which you will feel a tiny tingle behind the ear, along with the occasional zing. It seems like someone is pinching the area just behind your ear every few seconds, which is the closest way I can think to compare it to an electrical sensation.

Before removing the patch completely, you should have it on for around seven minutes. After that time, the electrical pulses will cease; therefore, there is no use in continuing to have it on.

The encounter did not strike me as very enjoyable, but neither did it leave a particularly negative impression on me either. Having said that, some people may find that the tingling sensation caused by the increased strength patch is a little uncomfortable while they have it on. As the waveform is increased, they have the potential to be powerful in comparison to the standard strength product. Because of this, I recommend that customers begin by applying the patch with the standard level of severity and then upgrade if they believe it is required.

After the seven minutes have passed, remove the patch, reapply it to the release film, and then store it away in a secure location. This is due to the fact that it can be used once more.

There is a second layer of gel that is exposed to the outdoors. To reapply the patch, peel off the protective film and attach it in the same manner as the first time. You can use it the next day, but anything after that and the impact will not be as effective. According to Thync, it is safe to use FeelZing again within six hours; however, to err on the side of caution, they recommend not exceeding two applications in a single day.

A look at the FeelZing Energy Patch with the question: Does It Work

The critical inquiry is this: how efficiently does the FeelZing Energy Patchwork work? As part of my job, I try out a lot of different items, and some of them make lofty claims about their capabilities. Before beginning this review, I have to say that I did not have high hopes for the effectiveness of FeelZing. But it did.

Following the stimulation period of seven minutes, I would normally experience some fatigue for a few minutes afterward. It’s strange, but whenever that happened, my mind would be going a mile a minute.

After that, there was a period of four hours of peace during which I found that I was full of energy and that my mind was clear. You have no idea why, but you’re suddenly in a fantastic mood.

During those few hours, I found that I was extremely productive, moving quickly from one activity to the next. In addition to this, I discovered that it improves one’s mood.

I got up at seven in the morning to play a tennis match that lasted for two hours. When I got back to the office, I applied the patch, and I noticed that it made me feel as though I had just woken up — ready to take on any challenge that might be thrown my way.

In a different situation, I had a flight that left quite early in the morning, which meant that I could not sleep the entire night. After applying the patch at one in the morning, I noticed that it was easy for me to stay awake. Surprisingly, I even found that I could get an hour’s worth of work done on the iPad when I was waiting in line at the airport.

When the supplement’s effects wear off, there is not the unpleasant crash you would normally experience if you had consumed caffeine or an energy drink. This is something that I’ve seen. And it had no impact whatsoever on the quality of my sleep.

An anode and a cathode electrode are embedded in the patch. These electrodes are responsible for providing “patterned, high frequency, high amplitude electrical stimulation” to the neurons that make up the autonomic nervous system. The autonomic nervous system is the component of the body that controls fundamental processes such as the rate at which the heart beats, digestion, and breathing.

Both the sympathetic and the parasympathetic nervous systems are utilized in order to accomplish this goal. The first one is known as the “fight or flight” mechanism, and it is responsible for producing a high level of awareness and concentration. It quickens the heart rate, which in turn triggers the release of adrenalin. This was essential to the survival of our remote ancestors. You have two options if you find yourself being pursued by a tiger: engage the animal in combat or break for it as swiftly as possible.

On the other hand, the parasympathetic nervous system causes the heart rate to slow down, resulting in calm and sluggish energy. This is the stage in which the body relaxes and restores its energy stores in preparation for future activities.

The patch is applied behind the ear, in a region with significant nerve connections to the sympathetic and parasympathetic nervous systems. The patch helps the autonomic nervous system reach an optimal balance for energy and focus by stimulating certain nerves through the skin and muscle tissue with a precise waveform of electric current.

If you have an excessive amount of activity in your sympathetic nerves, you may experience feelings of anxiety and restlessness. If your parasympathetic nervous system is overactive, you may experience feelings of lethargy and lack of motivation. The goal is to strike a balance between the two; the optimal state for maximum productivity is one in which you are alert but not overly anxious.

Electric stimulation of the peripheral nervous system has been shown to be safe in over 30,000 studies that experts in the field have evaluated. This asserts that FeelZing is risk-free, and the company cites these studies as evidence. During the pre-launch testing, ninety percent of users said that using the patch positively influenced their energy and focus.

The conclusion of the review of the FeelZing Energy Patch

The FeelZing Energy Patch is an innovative piece of technology. It is quite doubtful that you will discover anything else quite like it. After placing it behind your ear for seven minutes, you will feel the effects, which will continue for several hours.

Before I started working on this review, I had some reservations, but I was pleasantly surprised to see that the patch made a noticeable improvement. It assisted me in focusing better and provided me with a lot of energy without causing any adverse effects. No chemicals, calories, or dashes to the bathroom are required! This will perk you up and get you ready for the day, even if you are feeling sleepy and wanting to take a nap.

The sensation is unique but quite effective; you experience mental clarity and alertness as a result. It was as if you had woken up after a restful night’s sleep, but there was no morning haze to distract you.

If you want to avoid the crash and jitters that caffeine can cause, or if you want to wean yourself off of unhealthy sugary drinks, the FeelZing Energy Patch may be an option worth considering for you. The energy you experience will be more consistent and will be with you for a longer time. If you want to get into the zone and get things done, I recommend using this product for your studies or work.

You may learn more about it on the FeelZing website. I recommend you start with the patch of the standard strength and observe how it works before moving on to the one of the higher potency.

*We are a review site that earns a little compensation from the sale of specific things; nevertheless, the price you pay is unaffected. We are able to keep this website up and running thanks to your purchases of products after clicking on links within this post. We are not affiliated with any other company, and any thoughts expressed here are entirely our own. See our affiliate disclosure page for more details.