The Most Popular Programming Languages to Learn

Java: The Workhorse of Programming (3)

Python: The Most Versatile of 2020's Top Programming Languages ??(2)

What programming language to learn

When it comes to learning programming, the hardest part is deciding where to start. The good news is that in this article we will tell you about the most popular and used programming languages ??in 2020 to help you get a better idea of ??where to start. As you advance on your learning path as a programmer, you will discover which programming language or languages ??are the best for you, according to your interests and professional goals.

In the list below we review the top 5 of the most used programming languages ??in 2021, ordered according to their usefulness. The list is created taking as reference the StackOverflow developer survey and the use of these languages ??on GitHub, detailed in their report called: The State of the Octoverse.

Another site that we have used as a reference and that we recommend visiting is GitHut 2.0, a site for discovering programming languages ??on GitHub .

GitHub is the most widely used software development platform in the world.

Let’s go there with the ranking of programming languages ??for this year 2020:

To understand the difference between C, C ++, and C #, we must know at what level each language runs. C runs directly on top of Assembly, the language a computer understands to perform tasks. C is mainly used to create operating systems or programs to control Hardware devices.

C ++ is a higher level than C mainly. C ++ is a high-level object-oriented programming language that helps programmers write fast and portable programs. C ++ is extremely popular in game development.

From the list, the newest. One of the main languages ??promoted by Google. Go is a low-level language ideal for those who want to enter the field of systems programming. Inspired by C, it encompasses much of the same functionality as C ++ and C ++ but with a much simpler syntax. This makes it an easy language to learn. Go is a perfect language for creating web services, data pipelines, and even machine-learning packages.

As a compiled language, Go runs blazingly fast. It is an open source language and developers contributing to the project can see their contributions adopted and used by other programmers around the world.package main

Java: The Workhorse of Programming (3)

With the ” Write once, works anywhere ” philosophy , Java is very popular with those looking to ensure that the applications they develop have a consistent user experience. Java programs can run no matter what operating system the user is running.

When we create Android applications, the programming language we use is Java through the IDE called Android Studio.

The Integrated Development Environment (IDE) is a software application that provides comprehensive spaces to programmers for software development.

Python: The Most Versatile of 2020’s Top Programming Languages ??(2)

Python is considered the most versatile and complete programming language. Used to create a wide range of web applications, from YouTube to Instagram, financial analysis tools, big data applications and artificial intelligence, it is possible to create almost any type of program with Python . Also, due to its popularity, it has a large developer community and is easy to learn and use, which means that it is an excellent language to start programming.

Python was created with code readability in mind and has excellent library support, making it a good choice as a starting point for any project you start or for scaling very large applications. Also, it is compatible with most major systems and databases.

It is possible to create almost any type of program with Python.

Most web browsers support JavaScript . It works in conjunction with HTML and CSS to create interactive web sites and applications. Today, the importance of the Internet in our lives is incalculable, therefore, it is no coincidence that Javascript is number 1 in our top 5 of the most used programming languages ??of 2020, since most of the websites depend on the functionality that JavaScript provides .

It is worth noting that it was created as a frontend language but that with technologies like NodeJs it is now possible to use it as a backend language. JavaScript should not be confused with Java, although the two languages ??have a similar syntax to C, that’s where their similarities end.

Developed by Google in 2011, Dart was dubbed the ” JavaScript Killer “. It is a language optimized for creating applications on many platforms including mobile, web and desktop. Google developed this language with the idea of ??replacing JavaScript in Chrome with its own virtual machine, however after some minor criticism they changed plans for Dart to compile to JavaScript code when it comes to web development.

Dart has become very popular in recent years thanks to the launch of Flutter , Google’s UI toolkit for creating beautiful, natively compiled applications for both mobile, web and desktop from a single source code base.

Julia , the programming language that is ready to change the world with its high performance and high-level dynamic programming. Its main features are suitable for computational science and numerical analysis. However, it is also useful as a general-purpose programming language. Anyone interested in data science or machine learning will surely have to learn this language in the near future.

Swift, Apple’s own web development programming language, is a compiled general-purpose language capable of high performance across all Apple products. This programming language has strong influences from C and C ++. It also uses the Objective-C runtime library, allowing C, Objective-C, C ++, and Swift to run in one program at a time.

It is an open source language, giving developers access to create their own versions of the language. The usability of the applications on the Apple operating system platforms is perfect and avoids bad practices and common mistakes. It is even considered highly usable for game development. This makes it one of the most useful web development languages ??of the 21st century.

Since the release of JavaScript in 1995, Microsoft has worked tirelessly on developing a language to be proficient. After JavaScript saw a resurgence around 2010, Microsoft took the opportunity to respond in the form of TypeScript .

Microsoft designed its own scripting language with the intention of developing great applications. TypeScript can be used to develop client-side (frontend) and server-side (backend) running JavaScript applications.

We did not want to make this list so long, but these are not the only programming languages ??that can be considered as new at the moment, besides them, we can mention Elixir, Red, Hack, Crystal, Reason and Ballerina.

Stack Overflow is a popular forum-type website where developers can share tips, solutions, tricks, and resources for many programming languages. We bet every developer has solved a technical problem at least once in their life by reading a solution on Stack Overflow. It saves a lot of work time and has created a great community of developers. Not surprisingly, their catchphrase is: For developers, by developers .

Every year this organization publishes a study on developer trends.

You can see from the trends Stack Overflow publishes that Python has been growing rapidly in recent years, including 2020.

Since the end of 2011, the growth of Python has been exponential compared to the rest of the most popular programming languages. 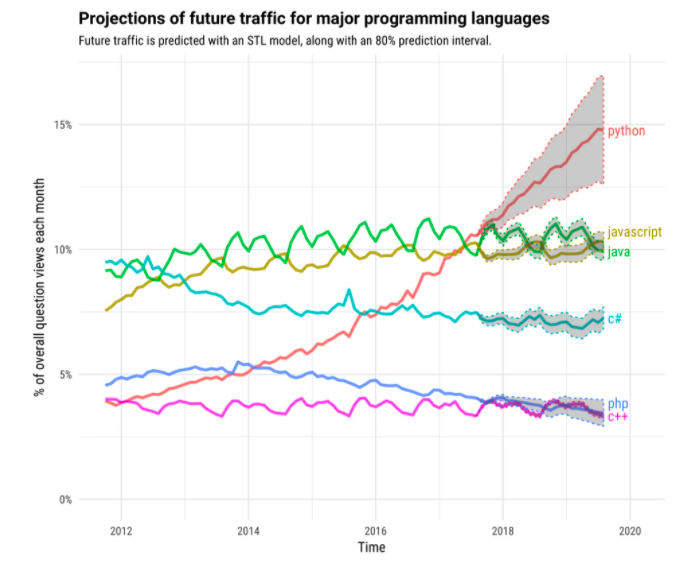 A successful career in the programming industry involves knowing which technologies are in greatest demand in the industry, learning and developing skills in those technologies, which can make it easier for programmers to earn higher pay.

These are the 5 programming languages ??that offer the highest paying packages to developers.

Clojure is a dynamic, general-purpose programming language that combines the accessibility and interactive development of a programming language with an efficient and robust infrastructure for multithreaded programming. This programming language is a compiled language, but it is still completely dynamic: all Clojure-supported features are supported at runtime. Clojure provides easy access to Java frameworks, with optional type hints and type inference to ensure that Java calls can avoid reflection.

Elixir is a general-purpose, concurrent, functional programming language that runs on the Erlang virtual machine. This programming language is based on Erlang and shares the same abstractions for building distributed and fault-tolerant applications. Elixir also provides productive tools and an extensible design.

Reference of salaries obtained from StackOverflow.

What programming language to learn

Among the top programming languages ??of 2020, Python and JavaScript are the most in demand in the market.

This year Python has hit the Java streak and is at the top of the list as the most popular. Despite this, there has been a surprise resurgence in JavaScript, perhaps indicating that employers are looking for more front-end developers as they redesign their websites and migrate their native applications to web and cloud environments.

This does not mean that they are the only ones you can learn, since many of the other programming languages ??have remained stable, with a gradual increase in all areas due to the need in the market to keep operations always online.

This tells us that the demand for programmers continues to rise and we doubt that it has peaked yet.

There is no “best programming language” in a general sense, since, as we have seen, each language can be used in different ways and for different purposes.

To give an example, PHP and C ++ are very good programming languages, now C ++ and PHP are not used for the same purposes. C ++ is a very low-level, high-performance language used to create games, kernels, and all that kind of stuff while PHP is a very high-level interpreted web scripting language for server-side web applications. As they are completely different in a technical sense they are not comparable.

Now, you could compare them in the sense of the demand it has in the labor market and the average salary offered by the knowledge and experience in each of them.

It is likely that as a developer of a particular language you can earn a lower salary than other developers of different languages, but it does not matter as long as you have an interest in the language you have selected.